All-rounders and top-order batsmen are the key on this surface with at least a rain-curtailed game on the cards.

The Round 5 game of the Vijay Hazare Trophy 2019 between Delhi and Baroda will be hosted by Motibaug Cricket Ground, Vadodara

Delhi and Baroda face off against each other in a Round 5 clash at the Motibaug Cricket Ground in Vadodara. Due to persistent rains in the city, none of the matches have seen the light with Delhi and Baroda being on the wrong side of the weather conditions. While Baroda has had three games washed out, Delhi has waited on the sidelines for two. While the likes of Hyderabad and Karnataka continue to pile on the points, both Delhi and Baroda look to register their first win of the season with the weather finally being on the brighter side.

Delhi enters this game as the clear favourites given the strength they possess with both bat and ball. In Dhruv Shorey and Nitish Rana, they have two excellent batsmen who will be crucial to their fortunes against Baroda. Their bowling unit is as good as any in the division with Indian international, Navdeep Saini leading the line for the capital side. On the other hand, Baroda also have a couple of explosive allrounders in Deepak Hooda and Krunal Pandya to muster up a challenge against the traditional heavyweights of the Indian domestic circuit.

Rain could play spoilsport for this game as well although this time at least a shortened game should be completed in Vadodara. Thunderstorms are predicted during the course of the game with a cloud cover of 30% at the start of the game, according to AccuWeather.

Although there haven’t been many matches played at this venue, run-scoring should be relatively easier for both sets of batsmen in case a match does take place. With the amount of rain that Vadodara has been experiencing over the last few weeks, fast bowlers could find some help as well.

Nitish Rana was the standout player for Delhi last season. With 375 runs and a couple of wickets to his name, Rana looks good for another good performance on a pitch that suits him. Similarly, Krunal Pandya has grown in leaps and bounds over the last few months.

His stints with the India T20 side should serve him well as he leads Baroda in the Vijay Hazare Trophy 2019-20. Navdeep Saini is another individual who had an amazing Vijay Hazare Trophy 2018 with sixteen wickets in just eight games. His average of 19.19 with the ball stands out, making him one to watch out for in this encounter.

Batting in the middle order and also contributing with the ball, KrunalPandya is a worth-while option as a multiplier 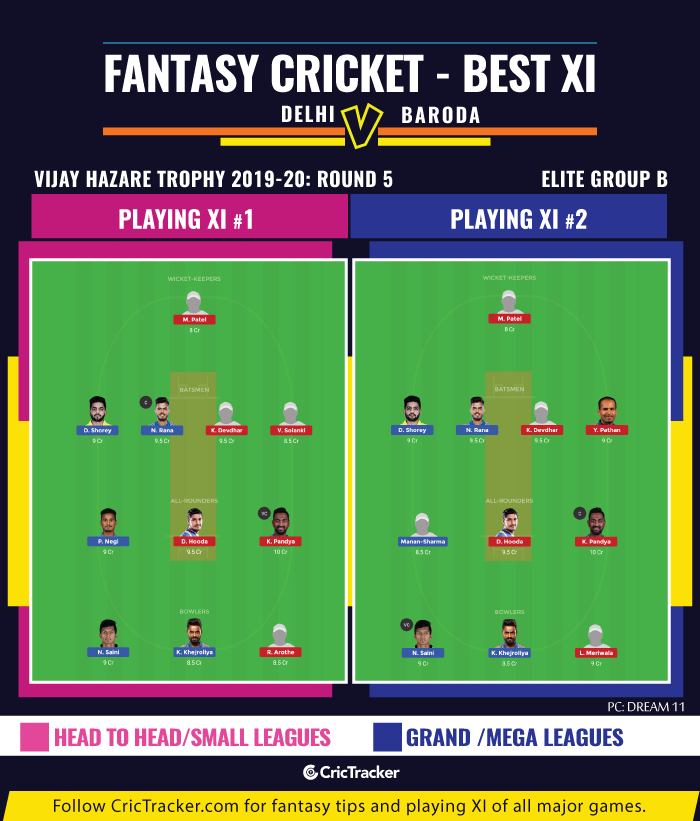 All-rounders and top-order batsmen are the key on this surface with at least a rain-curtailed game on the cards. Walking along the same line, Krunal Pandya and Nitish Rana are dependable picks for this game.

Similarly, the new ball bowlers will also get some swing upfront which NavdeepSaini and Rishi Arothe set to enjoy the conditions in the powerplay overs.

Delhi should register their first win of the season against Baroda

*Disclaimer: This team is based on the understanding, analysis and instinct of the author. While selecting your team, consider the points mentioned and make your own decision