Abhimanyu Easwaran and Ishan Porel will join Bengal from Monday.

The Round 5 match in the Elite Group C of the Vijay Hazare Trophy 2019-20 will be played between Bengal and Jammu & Kashmir at the Jaipuria Vidhyalaya Ground in Jaipur.

Jammu & Kashmir will face off Bengal in the Group C match on Monday at the Jaipuria Vidhyalaya Ground. Both the teams lost their first match but bounced back with a win in the second. J&K lost to Tripura in the first match but came back strongly against to defeat the hosts Rajasthan by 55 runs at the Sawai Mansingh Stadium.

On the other hand, Bengal suffered a 38-run loss in their first match against Gujarat. They face Services on Saturday and defeated them by 4 wickets. Their new skipper Abhimanyu Easwaran will join the team on Monday for his first game as the Bengal skipper. Easwaran and pacer Ishan Porel were part of warm-up against South Africans and missed two matches.

Thunderstorm with rain is expected in Jaipuria Vidhayala Ground on Monday. The weather forecast, however, doesn’t indicate major chances of rain during the match timings. At least a minimum of 30 overs aside is possible.

The Jaipuria Vidhyalaya Ground in Jaipur has hosted four matches in the ongoing edition of Vijay Hazare. The venue is good for chasing scores up to 240 but anything over 250 could be a winning score.

Abhimanyu Easwaran and Ishan Porel will return after being part of Board President’s XI.

Wriddhiman Saha is recovering from a thumb injury while Washington Sundar could be part of the XI soon.

Abhimanyu Easwaran has good numbers in List A cricket and will hope to make it big in his first season as captain. Shreevats Goswami has good T20 numbers in the last two years. He could be hoping to convert that success in One-Day format as well. Shubham Pundir and Shubham Khajuria closely missed out hundreds in the previous match.

Qamran Iqbal scored fifties in both matches and could be a safe option as captain or vice-captain. 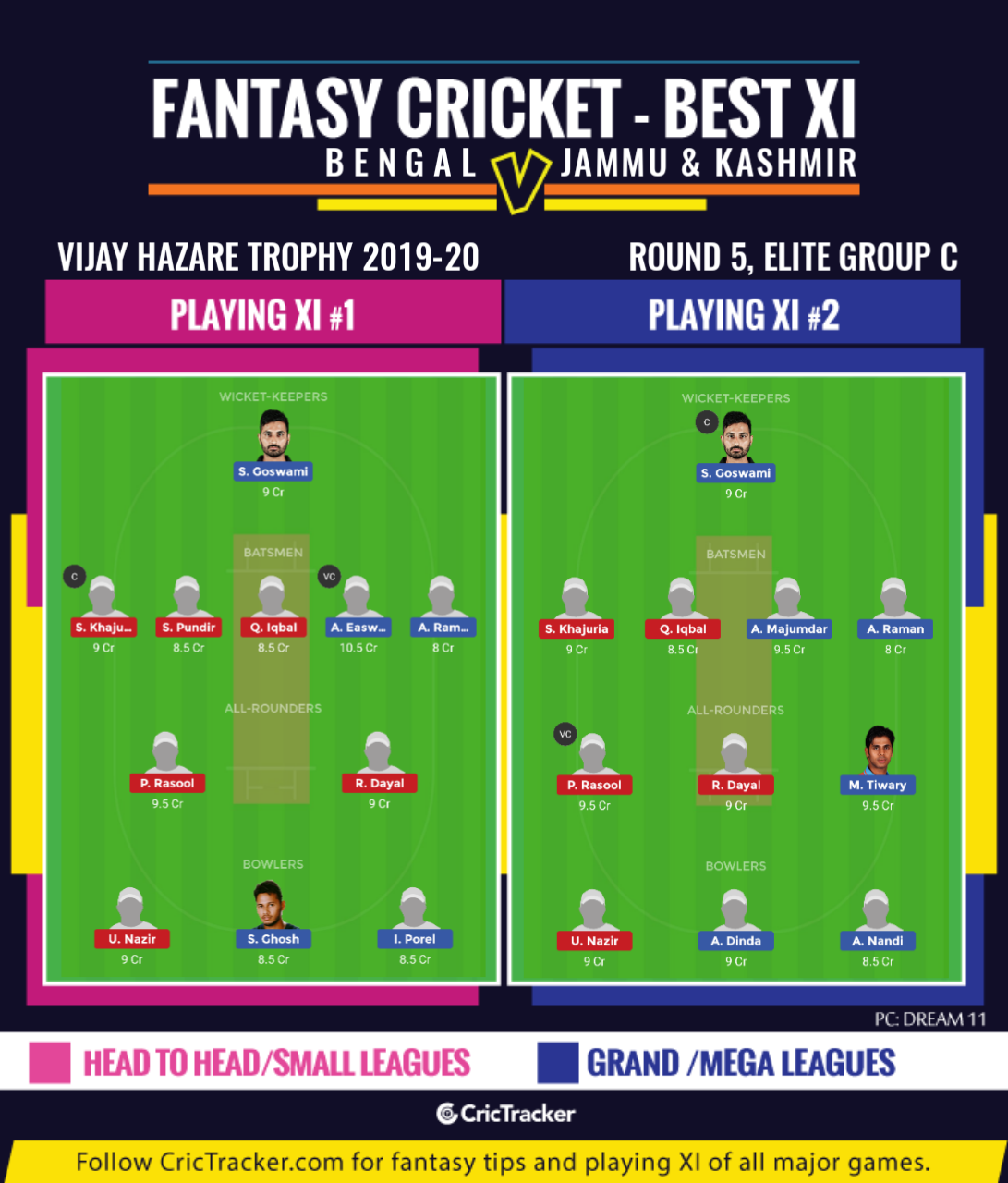 Manoj Tiwary hasn’t got big scores in the first two matches. He costs 9.5 credits and could be a risky pick. But he did took two wickets in the last match but J&K players might not fall into his trap.

Jammu & Kashmir could give a tough fight to Bengal in the present form.