If Bihar is to bat first, picking Gujarat bowlers and possibly captaining them would be a decent ploy.

The Round 7 game of the Vijay Hazare trophy 2019 between Gujarat and Bihar will be hosted by Jaipuria Vidhalaya Ground, Jaipur.

With four wins out of four in the ongoing Vijay Hazare Trophy 2019-20, Gujarat finds itself near the top of the Elite Group C Points Table. On Thursday, they face off against Bihar, who has experienced contrasting fortunes this season. Bihar hasn’t won a game in three attempts with none of their players able to perform consistently. With a place in the knockout phase firmly in sights, Gujarat would love to extend their winning run to five games at the expense of Bihar, who find themselves at the bottom of the points table.

Gujarat enters the game on the back of a sensational bowling performance against Rajasthan. The Gujarat batsmen chased down 103 without breaking much of a sweat and head into the game with a lot of confidence. Bihar will bank on their captain, Ashutosh Aman to provide the goods with the ball against a very strong and lengthy Gujarat batting unit if they are to compete against them.

There is a possible threat of rain for this game although a match should be completed. A cloud cover of 60%, according to AccuWeather which could aid the seamers upfront.

Roosh Kalaria has been the standout bowler for Gujarat this season. His tally of 11 wickets is the highest for his side and would be handy on a pitch that offers some swing. Priyank Panchal is one of the most consistent performers in the domestic circuit, who has been a regular name in the India A squads. Bihar captain, Ashutosh Aman’s skill-set is commendable with his left-arm spin troubling the best of batsmen over the years.

Priyank Panchal’s record in List A cricket stands out, making him a captaincy option for this game 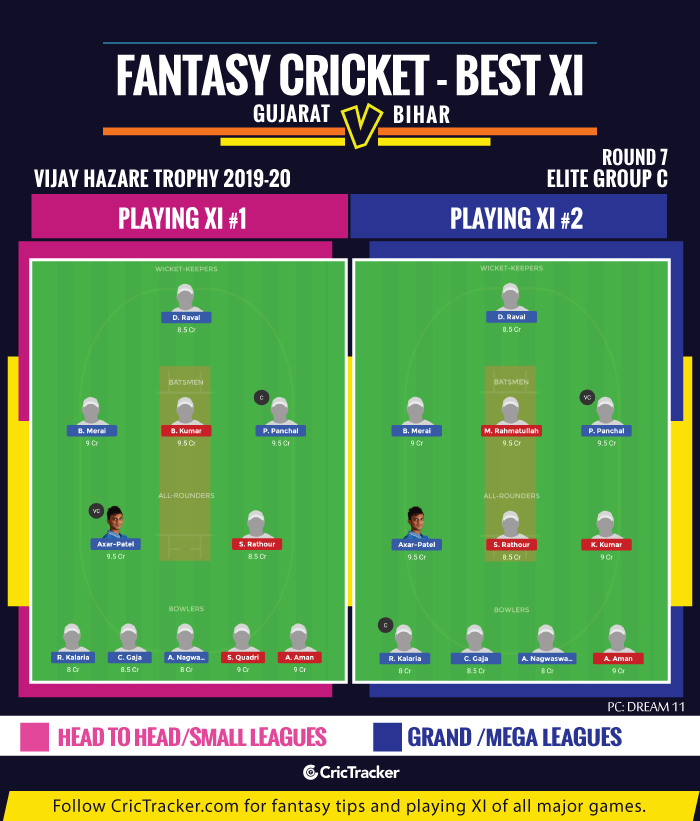 With this being a high scoring ground, top-order batsmen and finishers are crucial in the context of the fantasy contest with the likes of Priyank Panchal and Shasheem Rathour bound to score some runs on this surface.

If Bihar is to bat first, picking Gujarat bowlers and possibly captaining them would be a decent ploy with Roosh Kalaria and Axar Patel in decent form as well.

Gujarat should comfortably beat Bihar given their strength in all three facets of the game.