It is advisable to pick 4 all-rounders in at least one of your Dream11 fantasy teams.

The 3rd Quarter-Final match of the Vijay Hazare Trophy 2020-21 will be played between Uttar Pradesh and Delhi on 9th March at Arun Jaitley Stadium in Delhi.

The match is scheduled to start at 9:00 AM local time and IST. The match will be streamed live on Star Sports Network and Disney+ Hotstar.

Uttar Pradesh will take on Delhi in the 3rd Quarter-Final match of the Vijay Hazare Trophy 2020-21 on Tuesday. Though they finished 2nd in the Group C standings, Uttar Pradesh made it to the Quarter-finals on the basis of the culmination of their points and net run rate. They have won 4 of their 5 matches. Shivam Sharma is their lethal weapon with the ball and he has picked 2 five-wicket hauls. Former U-19 players Akshdeep Nath and Priyam Garg will be the main batsmen for Uttar Pradesh. Their team is led by star pacer Bhuvneshwar Kumar.

On the other hand, Delhi made an improbable comeback in the Preliminary Quarter Finals against Uttarakhand and won the game in the end by 4 wickets. Anuj Rawat’s special knock of 95*, half-centuries from Nitish Rana, and a commendable effort from skipper Pradeep Sangwan helped Delhi to seal the Quarter-Final birth. Prior to this, they finished second in the Group D standings with 16 points, where they won 4 matches and lost one. Considering their previous history and current form of players, Delhi will start as favorites for this match

UP vs DEL Weather Report for Quarter-Final 4:

It will be partly cloudy in Delhi at the start of the match and the sun is expected to come out in the afternoon. The temperature will be ranging between 21 and 32 degrees Celsius and humidity will be 50 percent. There is no chance of precipitation for this match.

The surface here at the Arun Jaitley Stadium favors the batsmen and we have seen the teams scoring close to 300 runs in the last 2 matches played here. Spinners can expect some turn out of it. We can expect another high-scoring encounter in this match. Batting first is preferable on this wicket.

'A good, family sort of vibe going on' - Chris Woakes on experience with his new franchise Delhi Capitals

UP vs DEL Top Picks for Today’s Dream11 Match:

20-year-old Priyam Garg has scored the most runs for Uttar Pradesh in this tournament. He has scored 256 runs in 5 matches at an average of 50 and a strike rate of 113.63 which includes one century and two half-centuries.

Akshdeep Nath is another reliable batsman for Uttar Pradesh. In this competition, he has scored 246 runs in 5 matches at an average of 61.5 and a strike rate of 97.61. He deserved a century against Railways but was unlucky to be dismissed for 93.

Shivam Sharma is the second-highest wicket-taker in this tournament. He has picked up 18 wickets in just 5 matches at an economy of 4.53 runs per over with the best bowling figures of 7/31.

Nitish Rana played a crucial knock for Delhi in the Preliminary Quarter-Finals. He scored 81 runs at a strike rate of 92.05. Overall in this competition, he has scored the most runs for Delhi, having amassed 377 runs in 6 matches at an average of 75.4 with the highest score of 137.

Delhi skipper Pradeep Sangwan played a key role with the bat in the Preliminary Quarter-Finals against Uttarakhand. He remained unbeaten on 58 runs from 49 balls, and with the ball, he picked up 3 wickets as well. Overall in this tournament, he has picked up 11 wickets and scored 93 runs.

After Shikhar Dhawan’s departure, the Delhi top-order is being led by Dhruv Shorey, who has scored 277 runs in 5 matches at an average of 55.4.

Anuj Rawat was splendid in the Preliminary Quarter-Finals against Uttarakhand. He came to bat when his side was struggling at 84 for 5 and scored an unbeaten 95 runs from 85 balls.

Suggested Playing XI No.1 for UP vs DEL Dream11 Fantasy Cricket: 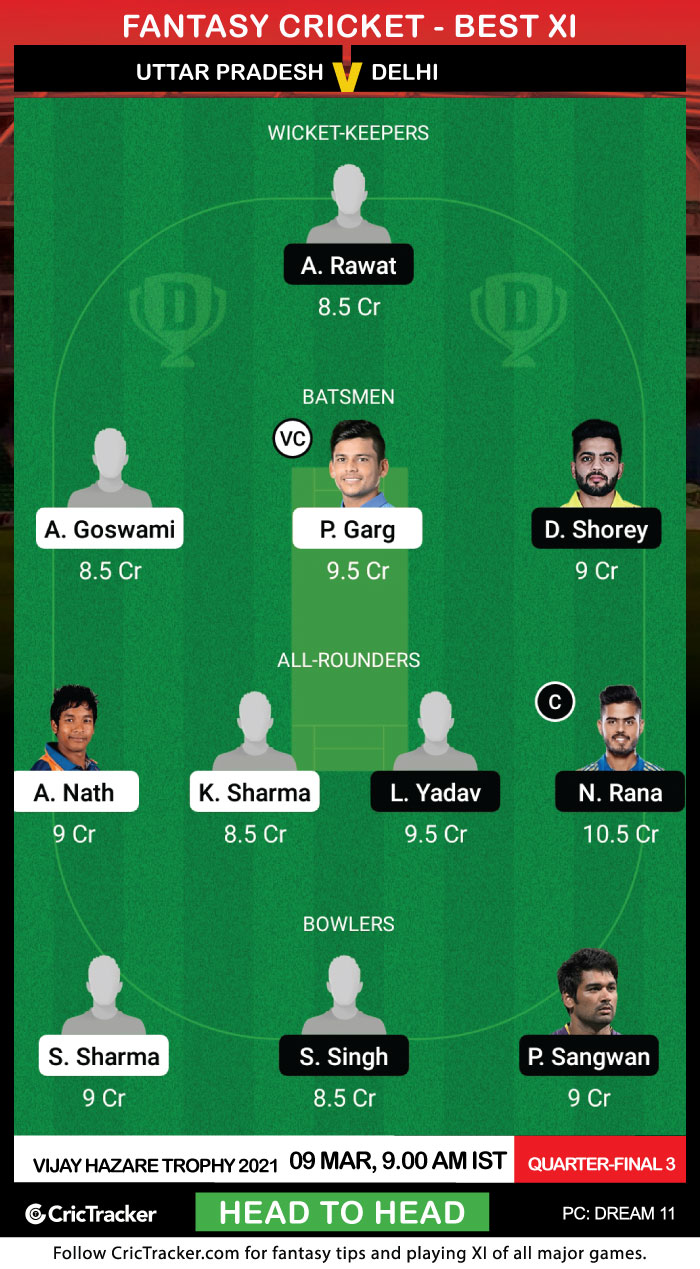 Suggested Playing XI No.2 for UP vs DEL Dream11 Fantasy Cricket: 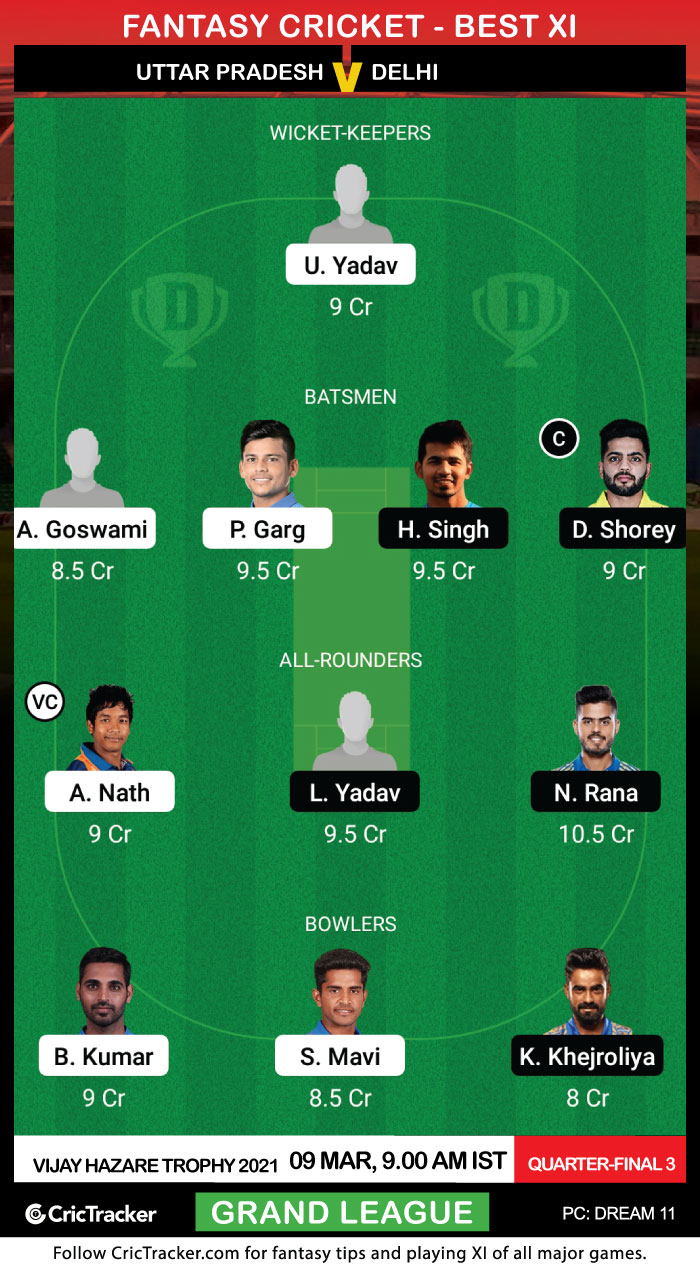 Both the teams have got a good bunch of all-rounders in their line-up and they are performing as well for their respective sides, consider picking 4 all-rounders in one of your Dream11 fantasy teams.

Today’s UP vs DEL Probable Winners: