Krishnamurthy Siddharth can be a good budget pick for your Dream11 Fantasy team at 8 Cr.

The 2nd Semi-Final match of the Vijay Hazare Trophy 2020-21 will be played between Karnataka and Mumbai on 11th March at Palam A Stadium in Delhi.

The match is scheduled to start at 9:00 AM local time and IST. It will be streamed live on Star Sports Network and Disney+Hotstar.

Defending champions Karnataka will take on Mumbai in the 2nd Semi-Final of the Vijay Hazare 2020-21 on Thursday. Led by newly-appointed skipper Ravikumar Samarth, Karnataka have done a tremendous job to get to the semis with a lot of ease. After losing their first game in the group stages against Uttar Pradesh, they didn’t look back and won 5 straight matches on the trot. In the quarter-final match against Keral, they won by 80 runs to cement their spot in the semi-finals. Their openers Ravikumar Samarth and Devdutt Padikkal are making batting look simple and the duo has already scored 600-plus runs in this tournament.

On the other hand, Mumbai have won all of their matches played in this tournament and will face a tough fight from the inform Karnataka unit. Mumbai too, have a daunting batting unit, packed with stars like Prithvi Shaw and Yashasvi Jaiswal, who had a partnership of 238 runs on the quarter-final against Saurashtra. With Suryakumar Yadav and Shreyas Iyer are in national duty, Mumbai will have to rely on youngsters to take them to the final.

It will be sunny throughout the day in Delhi with the temperature ranging between 23-32 degrees Celsius and the humidity will be 50 percent. There is no chance of precipitation for this match.

It’s an out-and-out batting wicket and we have seen 3 centuries have been scored on this surface in the last 2 matches, which clearly shows it’s difficult to pick wickets once the batsmen are settled in. The surface is expected to remain the same throughout the match, whoever wins the toss should bat first in the high-pressure semi-final game.

Also Read – We all know the benefits of the IPL: Jos Buttler

Devdutt Padikkal was the leading run-scorer in the last year’s tournament and he is carrying the same form this year as well. Padikkal has 673 runs in just 6 innings at an average of 168.25, which includes 4 centuries and 2 half-centuries.

Karnataka skipper Ravikumar Samarth is leading from the front and is having an extraordinary tournament with the bat, having 605 runs in 6 matches at an average of 151.25, with the highest score of 192.

Leg-spinner Shreyas Gopal has picked up most wickets for Karnataka in this tournament. He has scalped 12 wickets in 6 matches at an economy of 5.23 runs per over with the best figures of 3/41. Batsmen have had trouble in picking his googlies and it’s going to be his main weapon.

After getting ignored by the Indian selectors, Prithvi Shaw is proving why he can make a comeback into the side. In this tournament, he has scored 589 runs in 6 matches at an average of 196.33, with the highest score of 227*.

Yashasvi Jaiswal had a good outing with the bat in the quarter-final clash against Saurashtra, where he scored 75 runs at a strike rate of 72.12. Overall in this tournament, he has scored 173 runs in 6 matches at an average of 28.83.

Prashant Solanki has picked up 12 wickets in just 4 matches at an economy of 5.75 runs per over, with the best figures of 5/48. He can be a good budget pick at 8.5 credits. 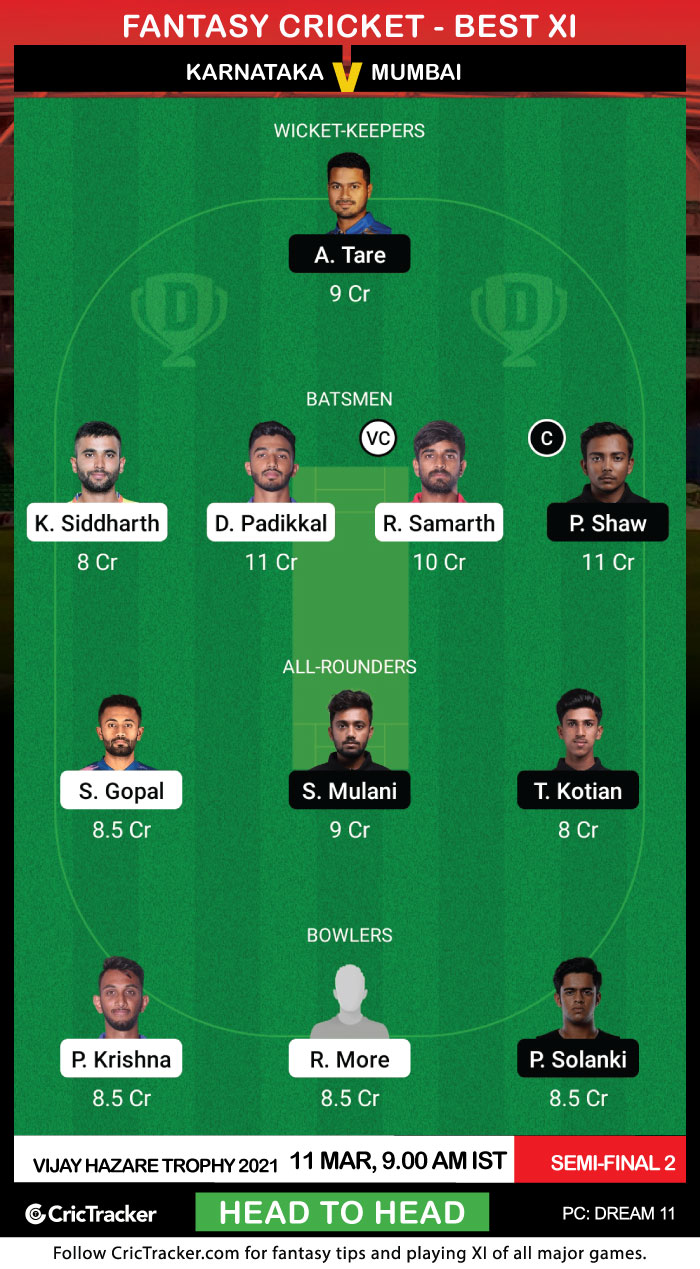 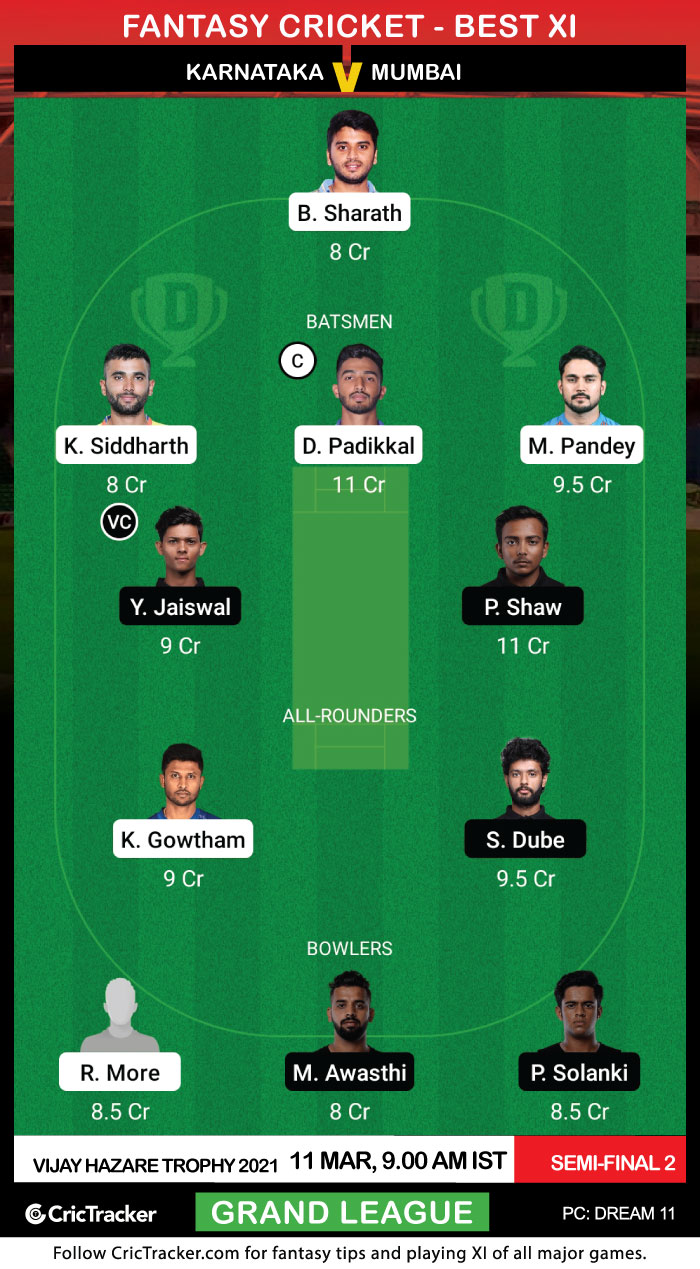 Krishnamurthy Siddharth has done a good job with the bat for Karnataka, scoring 245 runs in 5 innings. He can be a good budget pick for your Dream11 Fantasy team at 8 Cr.

Karnataka are expected to win this match.