The Elite Group B match of the Vijay Hazare Trophy 2021 will be played between Tamil Nadu and Andhra on 22nd February at Holkar Cricket Stadium in Indore.

Tamil Nadu and Andhra will square off against each other in the Elite Group B match of the Vijay Hazare Trophy 2021 on Monday. Last year’s finalist Tamil Nadu got off to a flying start in this competition, as they scripted a thrilling victory over Punjab by 6 wickets. Their batsmen N Jagadeesan, Baba Aparajith,and Shahrukh Khan were chief architects in the winning cause. They are looking unstoppable at the moment.

On the other hand, Andhra had a similar story in their first outing as they defeated Vidarbha by 7 wickets in the final over of the match. Ricky Bhui was the player of the match for his incredible match-winning performances with the bat. The return of Hanuma Vihari was the biggest plus point for them and they look a completely different unit as compared to last year. Both the teams had won their first game in a close finish and it will be interesting who will conquer the Indore battle.

TN vs AND Weather Report for Elite Group B Match:

It will be sunny in Indore with the temperature ranging between 19 and 29 degrees Celsius and the humidity will be 27 percent. There is no chance of precipitation for this match.

It’s a complete batting surface with small boundaries on either side of the ground. In the previous match, we saw Jharkhand scoring a mammoth 422 runs while batting first. We can expect another high-scoring run-fest in this match as well.

422 (One Match of this tournament played on this venue)

TN vs AND Top Picks for Today’s Dream11 Match:

N Jagadeesan played brilliantly in the run-chase against Punjab, scoring 101 runs in 103 balls. He is someone who can rotate the strike well and play according to the situations. Considering the next match is in flat batting track at Holkar Stadium, he is a must-pick for your fantasy teams.

Baba Aparajith carried his form from last year’s Vijay Hazare trophy and scored an important knock of 88 runs in the run-chase. Hhe even picked up an important wicket of Prabhsimran Singh at a crucial stage.

Ricky Bhui is a talented cricketer who was once a part of the India U-19 and Sunrisers Hyderabad squad. Coming to bat at no. 5 against Vidarbha, he scored an unbeaten 101 in 78 balls and won the game for Andhra.

Hanuma Vihari batted well for his 65 runs from 67 balls and was even a handful with his off-breaks, picking up one wicket at an economy of 4.7 runs per over. You can pick him for his all-around skills.

Cheepurapalli Stephen bowled well with the new ball against Vidarbha and got the important wickets of Jitesh Sharma and Ganesh Sathish, and he also later dismissed Darshan Nalkande.

Suggested Playing XI No.1 for TN vs AND Dream11 Fantasy Cricket: 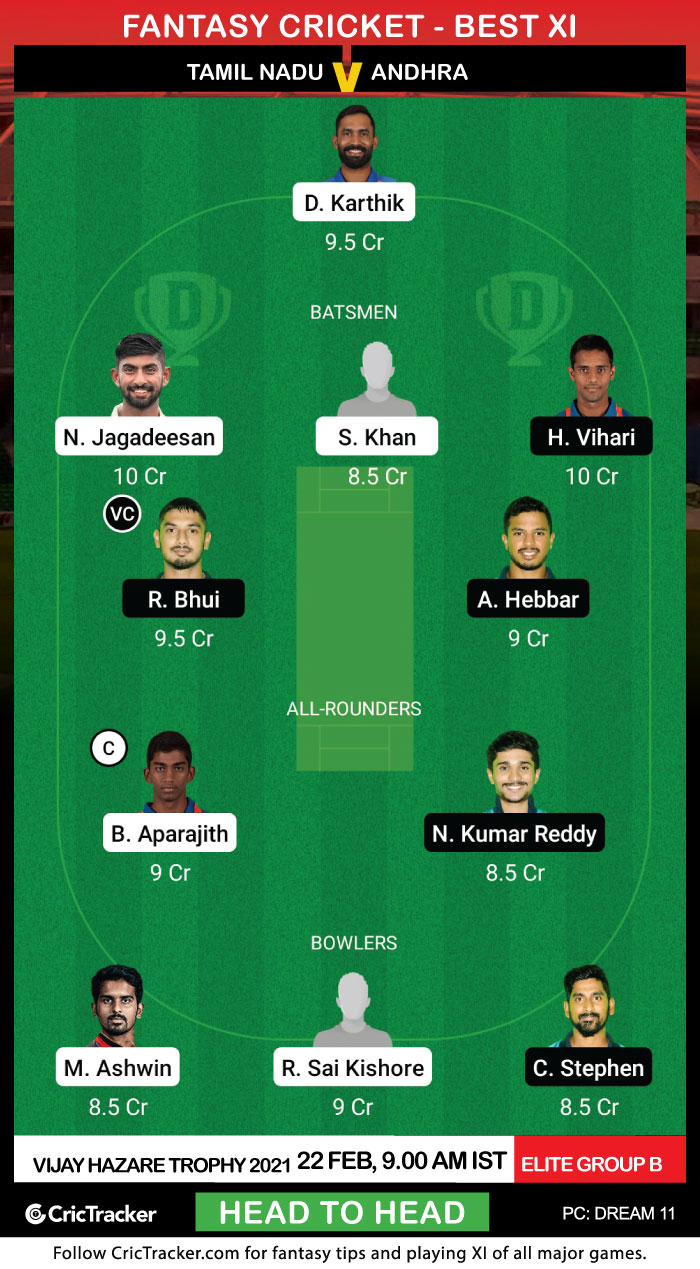 Suggested Playing XI No.2 for TN vs AND Dream11 Fantasy Cricket: 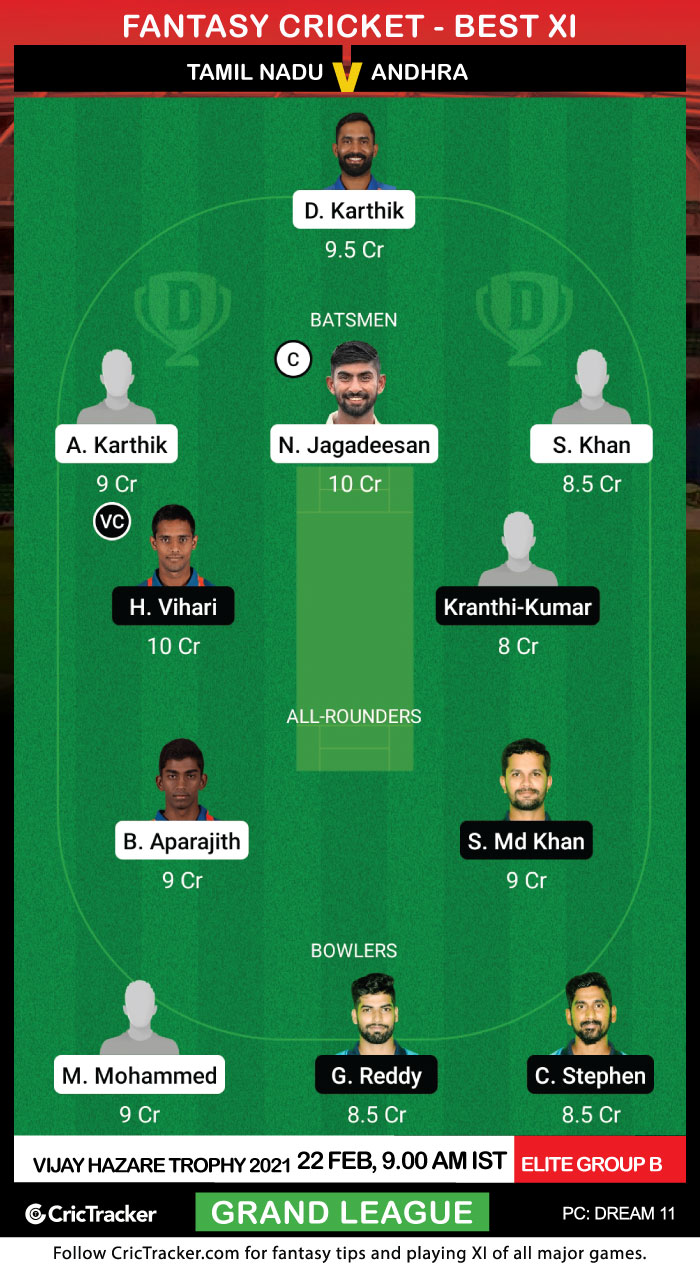 Today’s TN vs AND Probable Winners: