Kulwant Kherjoliya can be a good budget pick for your Dream11 Fantasy team.

The Elite Group D match of the Vijay Hazare Trophy 2021 will be played between Delhi and Rajasthan on 1st March at Jaipuria Vidyalaya Ground in Jaipur.

Delhi will be up against the Rajasthan in the Elite Group D match of the Vijay Hazare Trophy 2020-21 on Monday. It will be the last league fixture for both teams. Having lost to Mumbai in their first encounter, Delhi made a good comeback and won 3 back-to-back matches to stay in contention for the quarter-finals qualification.  On Saturday,  Shikhar Dhawan’s innings of 153 from 118 deliveries against Maharashtra won the game for Delhi. With 4 wins and a loss, they are in the second spot in the Group D standings with 12 points.

On the other hand, Rajasthan are already out of the qualification race, with one game remaining in the group fixture. They have won only one game so far and lost the other 3 matches. Currently, they are at the fifth spot in the Group D standings with 4 points. They started their campaign with a victory over Puducherry, but things went completely downhill after that. Considering the current forms of both teams, Delhi are the favourites to win this match.

It will be hot and sunny in Jaipur with the temperature ranging between 22 and 31 degrees Celsius and humidity levels are low at 18 percent. There is no forecast of rain for this match.

The teams batting first has won most of the matches played so far in this tournament here at Jaipuria Vidyalaya Ground. It is a good surface to bat on initially at the start and later it tends to slow a little in the second half. Anything over 260 is a good competitive score on this wicket. Whoever wins the toss should bat first.

After getting out very cheaply in the first 3 matches, Shikhar Dhawan got back his form and scored a brilliant 153 from 118 balls in the run-chase against Maharashtra. His knock helped his side register their third straight victory in this tournament.

Dhruv Shorey has been consistently scoring runs in the last 3 matches for Delhi, including 61 runs against Maharashtra in the previous match. Overall, he has scored 244 runs in 3 matches at an average of 81.33, with the highest score of 132.

Nitish Rana is another batsman who is contributing well with the bat for Delhi. He has scored 208 runs in 4 matches at an average of 52 and a strike rate of 104.52. You can pick him in your Dream11 Fantasy team for his performances with the bat.

Mahipal Lomror is going to be a key player for Rajasthan. He has scored most runs for his side in this tournament – 258 runs in 4 matches at an average of 64.5, with the highest score of 86. He has taken a wicket with the ball as well.

Ravi Bishnoi has been the pick of the bowlers from Rajasthan in this competition, picking up 8 wickets in 4 matches at an economy of 5.17 runs per over, with the best figures of 3/55. 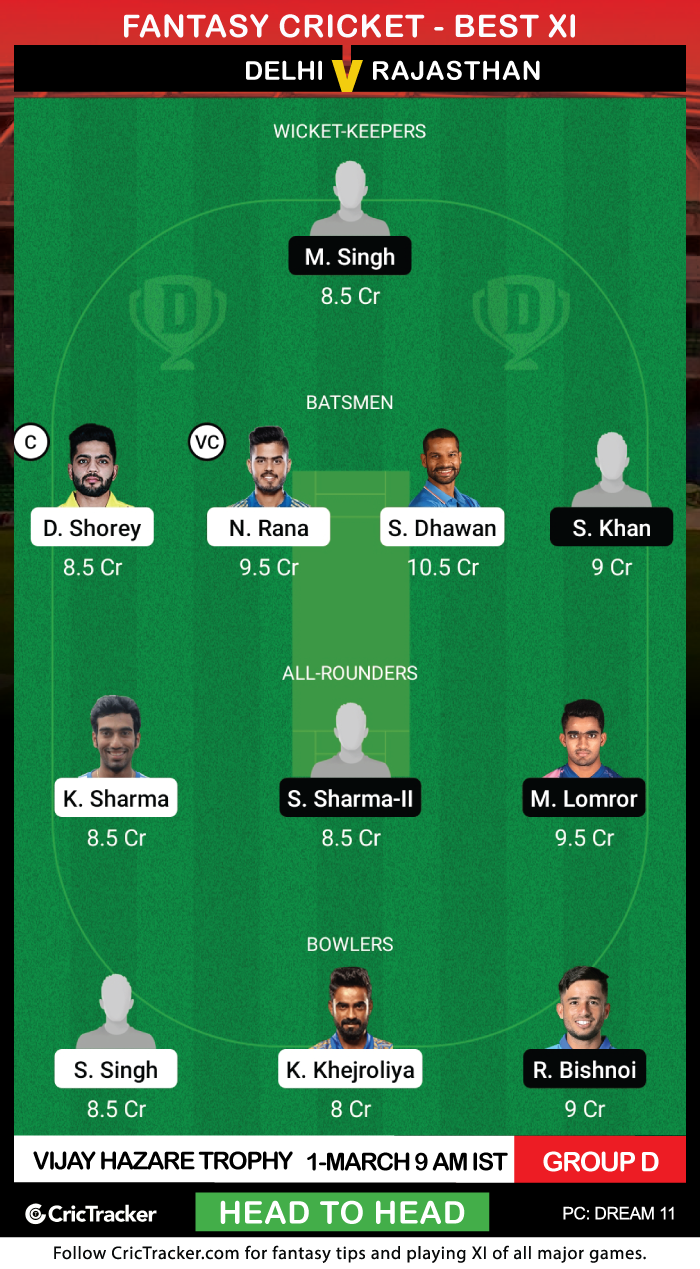 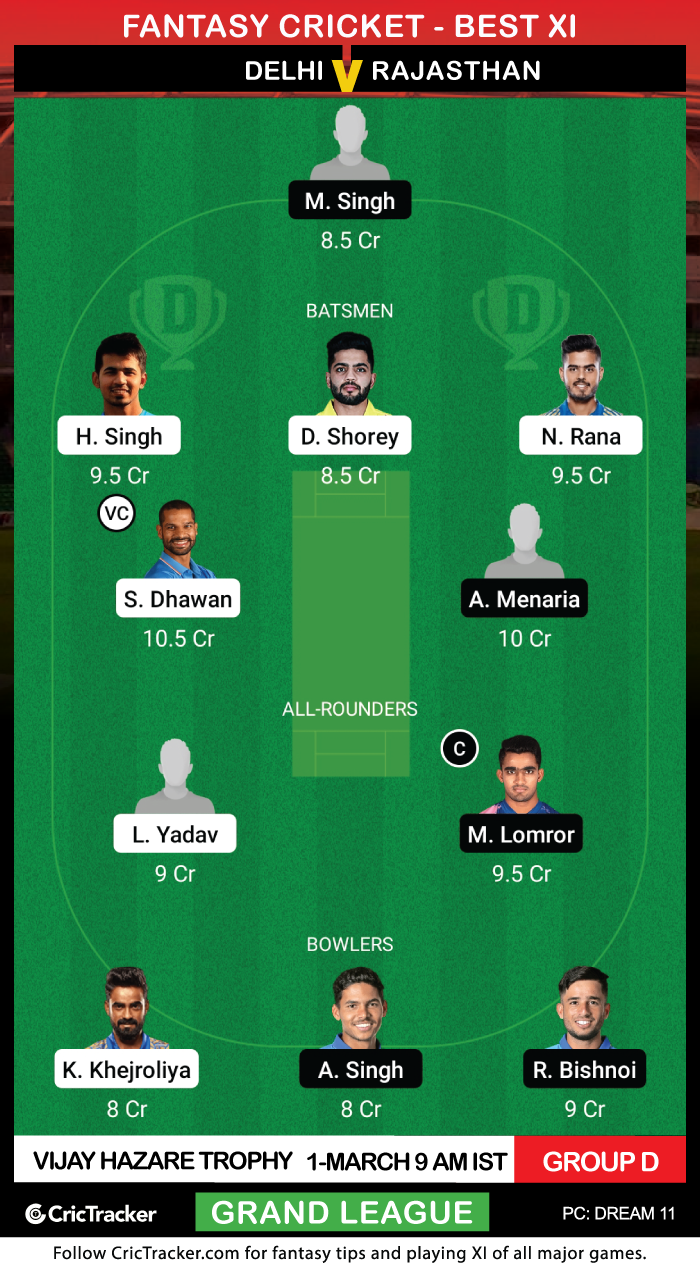 Kulwant Kherjoliya can be a good budget pick for your Dream11 Fantasy team. He has scalped 7 wickets in 4 matches and is an absolute steal at 8 Cr.