Rishi Dhawan is a must pick for your Dream11 Fantasy team.

The Elite Group D match of the Vijay Hazare Trophy 2020-21 will be played between Himachal Pradesh and Mumbai on 1st March at Sawai Mansingh Stadium in Jaipur.

Himachal Pradesh will square off against Mumbai in the Elite Group D match of the Vijay Hazare Trophy 2020-21 on Monday. Himachal Pradesh are already eliminated from the tournament with one game left for them in the group fixture. It wasn’t a good start for them in this competition as they lost against Maharashtra by 59 runs, but made a promising comeback with a 4 -wicket victory over Rajasthan. However, two back-to-back defeats have curbed their chances of making it to the next round.

Meanwhile, Mumbai are the only team that hasn’t lost a match among the Elite Group D teams in this competition. Their batting unit has been phenomenal throughout the competition. Prithvi Shaw, Shreyas Iyer, and Suryakumar Yadav are in extraordinary forms at the moment with the bat. With 4 wins in 4 matches, they are at the top of the table in the Elite Group D standings with 16 points. They will now need to finish their group fixtures with a win and keep the winning momentum for the knockout stages.

HIM vs MUM Weather Report for Elite Group D Match:

The pitch here at the Sawai Mansingh Stadium is one of the best batting surfaces in India. It offers plenty of assistance for the batsmen but it’s a nightmare for the bowlers. 328 runs has been chased in the last match, which proves that any total is not impossible to chase. Batting second is a good option on this wicket.

HIM vs MUM Top Picks for Today’s Dream11 Match:

Experienced campaigner Rishi Dhawan is the key all-rounder in the Himachal Pradesh line-up. He is the leading wicket-taker for his side with 12 wickets in 4 matches. Dhawan also has scored 132 runs at an average of 66 with the highest score of 73*.

Nikhil Gangta is the leading run-scorer for Himachal Pradesh in this tournament, scoring 164 runs in 3 matches at an average of 82, with the highest score of 100*.

After getting dropped from the Indian team, Prithvi Shaw is showing his class in this tournament. So far in this competition, he has scored 402 runs in just 4 matches at an average of 201 and a strike rate of 130.09, which includes one double-hundred.

Mumbai skipper Shreyas Iyer has been the pillar in Mumbai’s batting line-up. In this Vijay Hazare Trophy, he has scored 258 runs in 3 matches at an average of 129, with the highest score of 116.

Suryakumar Yadav is justifying his selection in the Indian team in almost every match of this tournament. He has scored 241 runs in 4 matches at an average of 60.25 with a whopping strike rate of 167.36.

Dhawal Kulkarni is among the most wicket-takers for Mumbai in this competition. He has picked up 11 wickets in 3 matches at an excellent economy of 3.84 runs per over, with the best figures of 5/44.

Suggested Playing XI No.1 for HIM vs MUM Dream11 Fantasy Cricket: 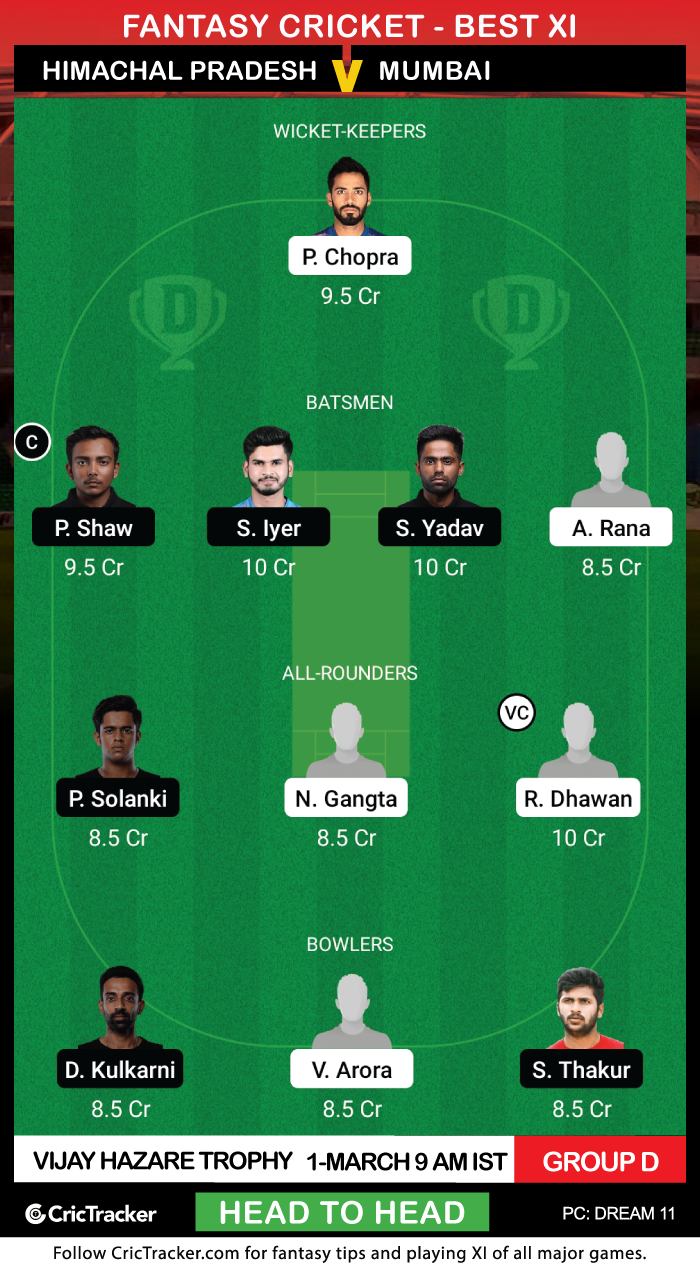 Suggested Playing XI No.2 for HIM vs MUM Dream11 Fantasy Cricket: 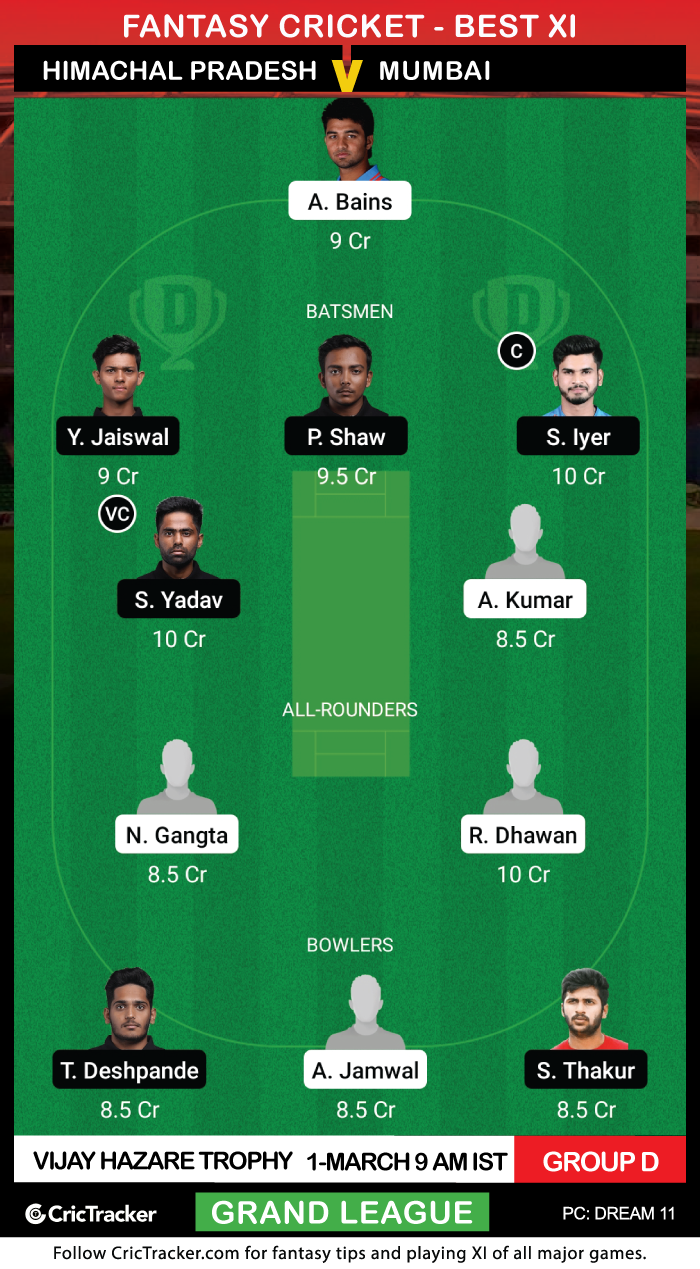 Rishi Dhawan is a must pick for your Dream11 Fantasy team as he can contribute with both bat and ball and can fetch you a lot of points.

Today’s HIM vs MUM Probable Winners: