Both the teams look strong and confident to enter today's game after coming from victories in their previous outings. 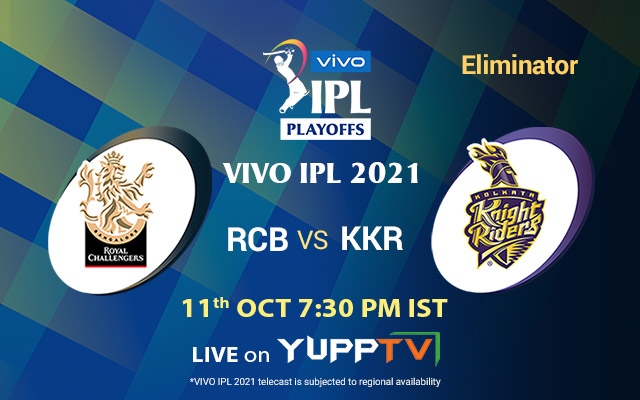 Royal Challengers Bangalore will face Kolkata Knight Riders in the Eliminator on Monday at Sharjah. Considered one of the most intense matches of IPL, the winner will keep the hopes alive, and the loser is out of the contest. While Virat Kohli look to grab the maiden title before he hangs up his boots and pass the captain band to someone else, KKR will aim for title number 3. Watch RCB vs KKR live on YuppTV and get an adrenaline rush experience.

This will be Virat Kohli’s last stint as RCB captain as he announced to step down from captaincy after this edition of IPL. After captaining RCB for 9 years, Virat has taken the team to playoffs and finals but never had his hands on the trophy. However, Kohli will continue to play for the franchise.

With 18 points in its bag, Bangalore finished the group stage at third position. Padikkal and Glenn Maxwell’s brilliant form is a positive sign for RCB. With AB Devillers, Kohli and Bharat, the middle order looks destructive. The team also has a perfect bowling attack spearheaded by Harshal Patel. Harshal is just three wickets away from breaking Bravo’s record of most wickets in a single IPL edition.

After a devastating performance in India, Eion Morgan led KKR made an incredible turnaround and changed their fortunes in the UAE leg to enter the playoffs. The two-time champion will go all the way to revive their glory. KKR, under Gautham Gambhir leadership, won the title twice in three years. KKR is back in the playoffs after a gap of two years and will leave no stone unturned to lift their third title.

For KKR, the top order is in blistering form. Shubman Gill, Venkatesh Iyer, Rahul Tripathi and Nitish Rana have provided brilliant starts to the team. Shivam Mavi, Ferguson, Narine and Varun have been outstanding with the ball. The only concern for KKR is Andre Russell’s availability.

Both the teams look strong and confident to enter today’s game after coming from victories in their previous outings. RCB clinched a last-ball six victory against Delhi in their last league stage match, and KKR won against Rajasthan Royals with a comfortable margin.

Watch IPL 2021 Eliminator between RCB and KKR live on YuppTV.