The inform Brisbane Heat are expected to stop the Melbourne Renegades’ winning streak and seal their spot in the final four.

Brisbane Heat will be playing for the second time in two days at the Harrup Park in Mackay and the Melbourne Renegades is their opponent on Sunday. They knocked out the Adelaide Strikers from final four contentions by defeating them on Saturday. Heat now have six wins from their last eight games and are only a win away from confirming their top four finish. They have won six of the 11 matches they played thus far and are placed third in the points table behind the Sydney Sixers (16 points) and Sydney Thunder (15 points) who also played 11.

They will be up against the Melbourne Renegades who are trying to make it through to the finals. Heat have won each of their last three matches and are placed at 5th with 11 points from ten games. Their fight will be mostly with the Perth Scorchers who are currently 4th in the table having won six of their 11 matches. Renegades are only one point behind the Scorchers and have an extra game in hand. Tayla Vlaeminck will miss the remainder of the season with a knee injury, Zoe Cooke has come into the squad.

The 46th match of the Women’s Big Bash League (WBBL) will be played between Brisbane Heat and Melbourne Renegades at the Harrup Park in Mackay.

Mackay has hosted three WBBL games thus far including the game between Heat and Strikers. During the two games played here in the previous edition, scores of 133 and 93 were recorded and the second batting sides chased it down with ease. Heat made 160 in the game against Strikers on Saturday and restricted the opposition to just 117/7.

Except for the first game of the season, Molly Strano has earned at least 10 performance points. The last four games have been productive for Strano as she got 19, 32, 35 and 40.5 points. Once again she will be crucial for the Renegades in the team’s big game.

Sophie Molineux should start as the captain after the damage she caused with both bat and ball. She has been in great form in the recent matches and it could continue in the coming games as well. The Brisbane all-rounders Grace Harris, Sammy-Jo Johnson and Jess Jonassen are perfect options for multipliers. Molly Strano and Amy Satterthwaite can be considered as vice-captain. 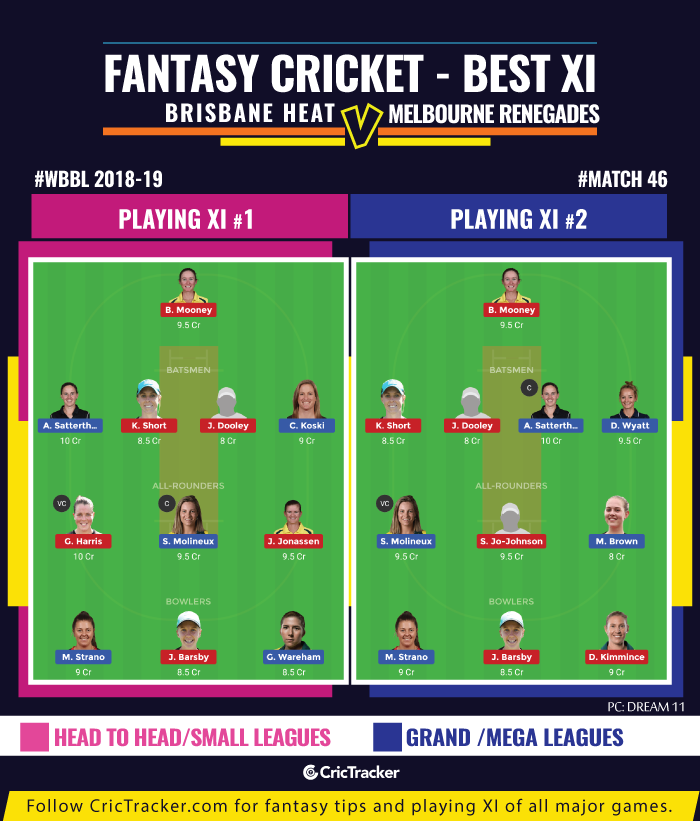 The all-rounders list contains Grace Harris, Sophie Molineux, Sammy-Jo Johnson and Jess Jonassen who are the most interesting picks. Molineux and Harris will be a sure shot picks given their consistency leaving a gamble between Johnson and Jonassen. Maitlan Brown is someone you want to pick to increase the available credits for other categories.

The inform Brisbane Heat are expected to stop the Melbourne Renegades’ winning streak and seal their spot in the final four.