Adelaide Strikers are expected to once again win unless it is another impressive batting performance from Hobart Hurricanes.

Adelaide Strikers and Hobart Hurricanes witnessed the 3rd highest aggregated game in the WBBL history as the Strikers made 189 before the Hurricanes finished with the same to Tie the game. In the Super Over, the Hobart side made 12 runs which the Strikers chased down in three deliveries as Sophie Devine started the over with back to back sixes. She made an unbeaten 99 while batting first and kept her 100% win record while playing in the Super Overs of the WBBL.

The two teams will once again face off on Wednesday with same squads that too at the Karen Rolton Oval. The Hurricanes are placed at the bottom of the points table with two wins from 12 matches while the Strikers have won three of the 11 matches that includes a washout. They still have an outside chance to finish in the final four but not without a miracle. Strikers need to win their remaining three matches and hope they will get a chance to sneak through with only 13 points.

The 49th match of the Women’s Big Bash League (WBBL) will be played between Adelaide Strikers and Hobart Hurricanes at the Karen Rolton Oval in Adelaide.

The Karen Rolton Oval nearly witnessed the highest run chase in WBBL history but might not see another 180+ game. This venue hosted only one WBBL game earlier this season. Batting first, the Strikers managed only 144/7 while the Melbourne Stars chased it down in 19.3 for the loss of six wickets. Once again, scores over 150+ can be expected.

Meg Phillips is the joint leading wicket-taker for the Hurricanes in this BBL season with 12 wickets. Phillips has taken those 12 wickets in only eight matches. She picked up 3-wicket hauls in back to back matches against the Brisbane Heat in the last round.

Sophie Devine and Mandhana will be key yet again after a good game on Tuesday. These two have to be the first preferred multiplier options. Among the bowlers, Schutt and Phillips can be considered as vice-captain. Knight’s performances have been poor of late but is worth the risk. 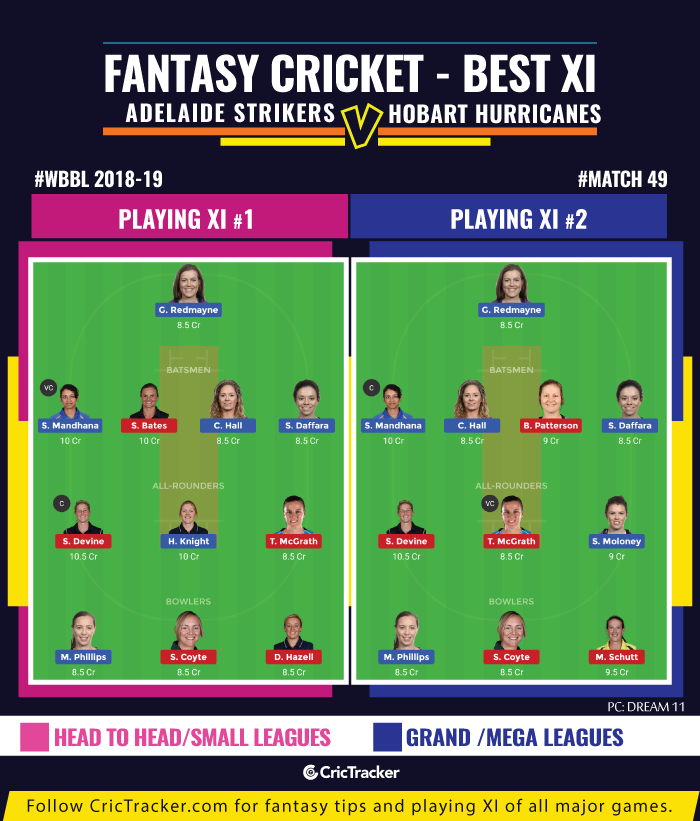 To pick all of Suzie Bates, Sophie Devine, Heather Knight, Megan Schutt, Smriti Mandhana and Georgia Redmayne at a go, more players with 8 credits have to be considered. Which comes at a cost as the less priced players usually turn out ineffective.

Adelaide Strikers are expected to once again win unless it is another impressive batting performance from Hobart Hurricanes.