Perth Scorchers are expected to win this fixture and end Adelaide Strikers’ last hopes of making it to the semi-final.

Perth Scorchers and Adelaide Strikers will face off twice in two days in Alice Springs which will be do-or-die clashes for both the teams. The Strikers need to win both matches and hope the Melbourne Renegades lose both their remaining matches. The Scorchers need to win at least one of these two games but their chances depend on Renegades. If Scorchers manage to win one of their two, the Renegades shouldn’t win any of the remaining.

If Scorchers can defeat the Strikers twice in two days, they will need at least one defeat of the Renegades to make it to the final four. The Perth team have a boost around of these two games as Elyse Villani has been declared fit to return to the squad after recovering from a hamstring injury. The Technical Committee has approved Local Replacement player, Bhavi Devchand who comes into the squad for Hayley Brennan, who is unavailable due to illness.

The 51st match of the Women’s Big Bash League (WBBL) will be played between Adelaide Strikers and Perth Scorchers at the Traeger Park in Alice Springs.

The two matches played between these two sides in the 2017/18 WBBL season turned out to be low-scoring ones. The batting first teams made 87 and 107 in those two matches to lose by six wickets and win by 31 runs respectively.

Meg Lanning has been crucial behind the late success of the Scorchers. The Perth skipper has aggregated 299 runs in her last five innings that includes four 70+ scores. In another game, she was dismissed for just one. Once again, Lanning will be crucial for her side in this important final round.

Meg Lanning and Sophie Devine will be ideal for the multiplier roles from this game. The likes of Suzie Bates and Elyse Villani can be considered for these roles. Heather Graham of Perth will be an ideal all-rounder. 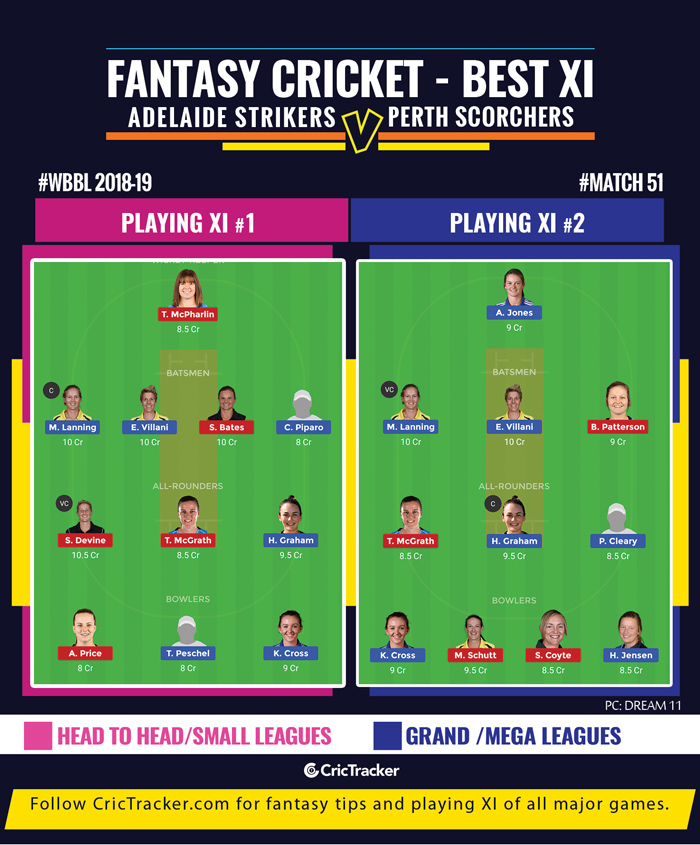 Players with less price have to be preferred if anyone wants to pick all Suzie Bates, Sophie Devine, Heather Graham, Meg Lanning, Elyse Villani. As a result, high priced bowlers such as Megan Schutt, Kate Cross and Hayley Jensen will be missed.

Perth Scorchers are expected to win this fixture and end Adelaide Strikers’ last hopes of making it to the semi-final.