The Melbourne Renegades are expected to inch close to the semi-final berth with a comfortable win over the Hobart Hurricanes.

At the crucial juncture where semi-final spots up for the grabs, Melbourne Renegades lost a close game to the Sydney Thunder which brought an end to their 4-match winning streak. They will be facing the Hobart Hurricanes on Saturday. With 13 points from 12 matches, the Renegades are placed at No.4 in this points table. The Satterthwaite-led side has chances of making to the next round in their hand as they need to win both their remaining two matches.

If Renegades win at least one of the two matches, they need to hope the Perth Scorchers to be defeated by the Strikers in one of the two games. If both Renegades and Scorchers lose their remaining two, the Strikers and Renegades will be tied on 13 points. The Strikers’ current NRR is -0.400 while Renegades’ NRR stands at +0.027. The Renegades have added Anna Lanning added to their squad for the last two matches while Hurricanes have a 13-player squad for the last match by removing Meg Phillips.

The 52nd match of the Women’s Big Bash League (WBBL) will be played between Melbourne Renegades and Hobart Hurricanes at the Junction Oval in Melbourne.

The five WBBL matches this season have an average score of 146 at the Junction Oval. Three games witnessed scores of 150+ with a highest of 172 by Adelaide Strikers which they won by 36 runs. The remaining four matches have been won by chasing sides.

Picking Maitlan Brown helps to reduce costs as she is valued at only 8 credits. Five International players in both the sides are priced at 9.5 and more credits who are the must in this game. Her performance points in the previous eight games read – 12, 34, 23, 2, 21, 20, 2 and 26. Brown chips in with wickets and occasionally with the bat when required.

Sophie Molineux has to start as the captain due to her recent form. The International stars Amy Satterthwaite, Smriti Mandhana, Danielle Wyatt and Heather Knight will be the game-changers in this fixture. 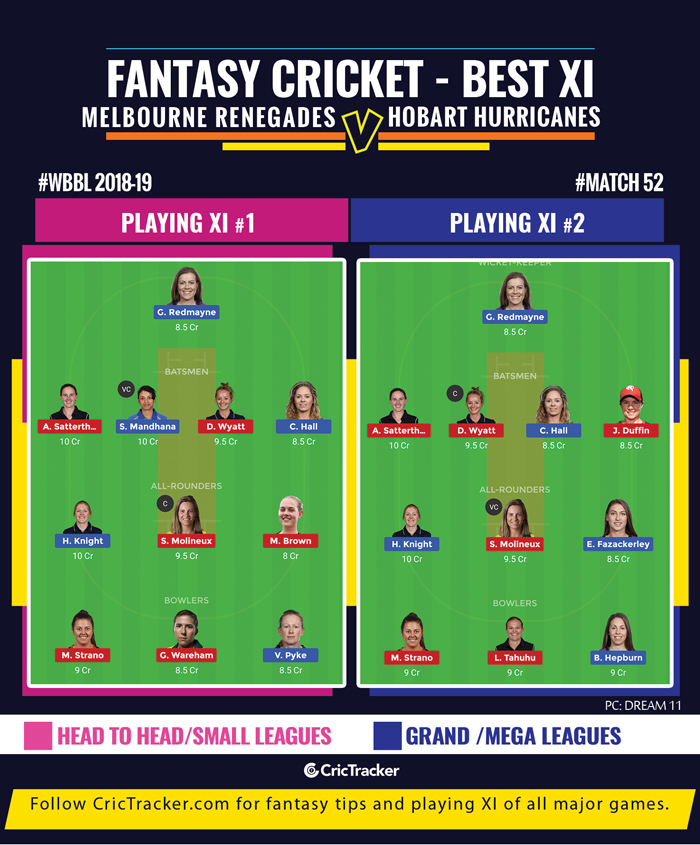 Amy Satterthwaite, Smriti Mandhana, Danielle Wyatt, Heather Knight and Sophie Molineux together cost 49 credits leaving 51 for six players. As a result, not many bowlers with 9 credits can be fitted. Leaving one of those five players can cost if all of them put on a good performance.

The Melbourne Renegades are expected to inch close to the semi-final berth with a comfortable win over the Hobart Hurricanes.