The Sydney Thunder are expected to finish the group stage with their 10th win of the season.

The Sydney Thunder will be featuring with their full strength for one last time as they will be missing some of their International stats due to national commitments. Thunder will be hoping to finish the league phase with a win which will give them a chance to finish at No.1 in the points table ahead of Sydney Sixers. They currently have 19 points from 13 matches with nine wins. They will face Brisbane Heat at the Cazaly’s Stadium in Cairns on Saturday.

The Brisbane side has more or less confirmed their berth in the semi-final. Losing this game wouldn’t cost them a spot in final four. Their current NRR is +1.178 well ahead of the Perth Scorchers’ -0.552 who currently have 12 points from 12 games. Scorchers need to win both their matches to equal Brisbane’s tally of 16 points. Both the teams have named unchanged squads for their last game of the league stage.

The 53rd match of the Women’s Big Bash League (WBBL) will be played between Brisbane Heat and Sydney Thunder at the Cazaly’s Stadium in Cairns.

The Cazaly’s Stadium in Cairns hasn’t hosted a professional limited-overs match in the last ten years. The venue hosted two FC matches in this span – CA XI vs Pakistan game which was a pacer friendly track while a Sheffield Shield game which was a high-scoring one.

Nicola Carey has been brilliant in the last two matches where she scored 39* and 13* respectively and picked up two wickets apiece. She has to start ahead of any of the Brisbane all-rounders in the XI.

The likes of Grace Harris and Nicola Carey will be first preferred options for multipliers. Other than these two, Sammy Jo-Johnson and Jess Jonassen can be perfect for these roles. Stafanie Taylor can be considered as well despite her performances in the recent games. 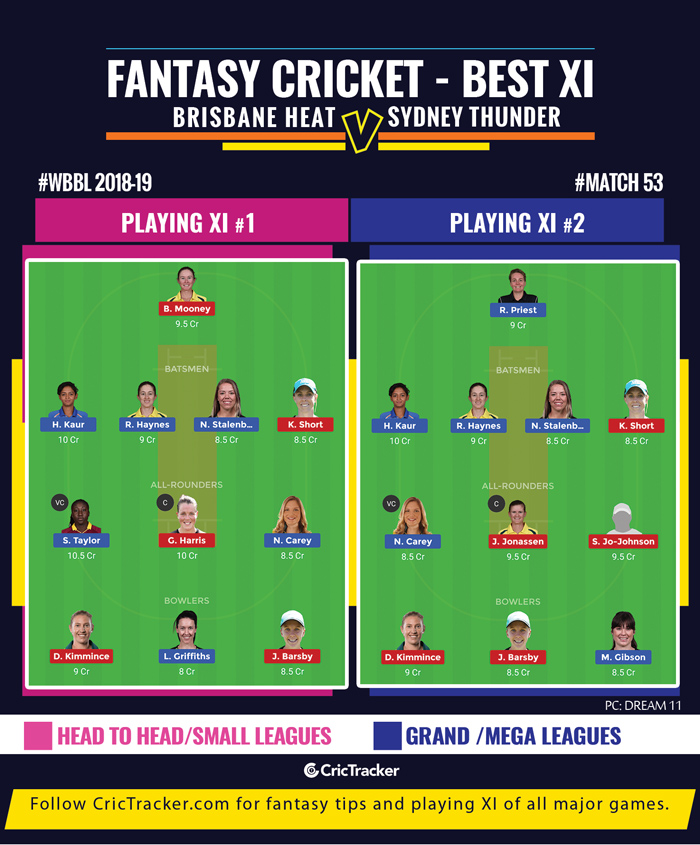 The all-rounders’ category contains Stafanie Taylor, Grace Harris, Nicola Carey, Sammy Jo-Johnson and Jess Jonassen. The three players from Brisbane have been consistent while Stafanie had some averages matches of late while Carey peaked at the same time.

The Sydney Thunder are expected to finish the group stage with their 10th win of the season.