WEF-W vs NOS-W Match Prediction- Who will win today’s The Hundred Women match?

Welsh Fire would be looking to register their first win of The Hundred Women's 2022.

Welsh Fire Women will be locking horns with the Northern Superchargers in Match 18 of The Hundred Women’s 2022 encounter at the Sophia Gardens in Cardiff on Friday, August 26. The Superchargers have blown hot and cold this season, having won and lost two each of the four games that they have played so far. They currently occupy the fifth position in the points table with four points to their tally at an NRR of -0.309. The Northern Superchargers would be heading into this encounter on the back of an impressive seven-wicket victory over the Manchester Originals last weekend.

Welsh Fire on the other hand have been disappointing in the 2022 season. Not only are they languishing at rock bottom, but have also failed to register even a single victory in all the four matches that they have played so far. Their net run rate is dismal at -0.842. Welsh Fire need to rise from the shambles at the earliest before it’s too late. They would be heading into this contest after a thumping eight-wicket loss to the London Spirits.

The Cardiff wicket is one of the main grounds which is used for hosting domestic and international fixtures and it is a perfect batting surface that favors the batters. The batters would be hoping to make merry on the Sophia Gardens track and even targets can be chased easily on this ground. The bowlers on the other hand might not get any purchase at all. Therefore, the captain winning the toss will have no hesitation in bowling first.

Laura Wolvaardt has emerged as one of the most consistent and top-class batters in South Africa as well as world cricket. Wolvaardt was in good form in the last game against the Manchester Originals where she scored an unbeaten match-winning 90 runs off 49 deliveries at an outstanding strike rate of 183.67. The Northern Superchargers would be hoping that she plays yet another impactful knock against Welsh Fire.

The onus would be on Hayley Matthews to ensure that she provides timely breakthroughs for the Welsh Fire when they take on Northern Superchargers. She was really impressive in the last match against the Southern Brave as she finished with figures of 2/26. Matthews will once again need to star with the ball in hand as Welsh Fire desperately look forward to opening their account this season. 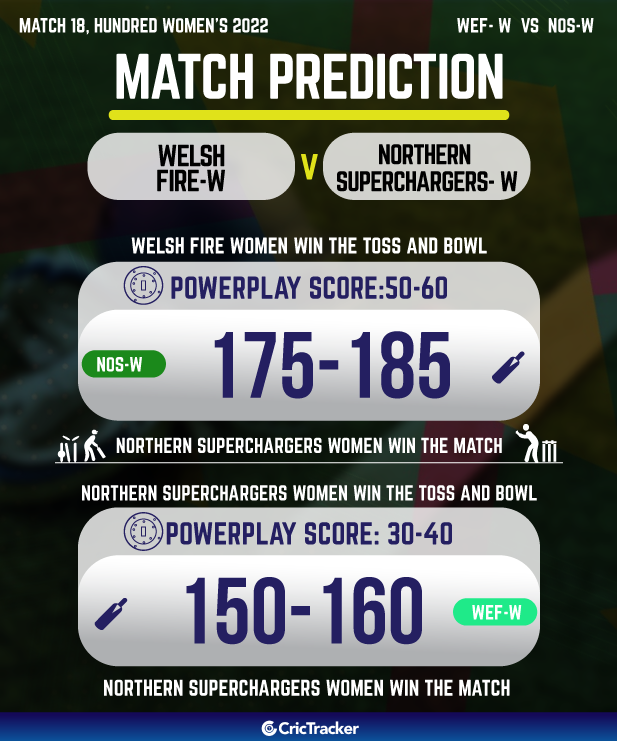