Skipper George Balderson took 6 wickets at an average of 10.66 with help of a 4-wicket haul.

The 4th game of the West Indies U19 Tri-Series will be played between England Under-19s and Sri Lanka Under-19s at the Sir Vivian Richards Stadium in North Sound, Antigua.

This game can be viewed on West Indies Cricket YouTube Channel and on Fan Code in India.

Sri Lanka Under-19s kick-started their campaign with a 1-wicket win against the hosts West Indies Under-19s. This result comes as a surprise since the West Indies were considered to be the stronger side in the competition. Chasing 138 to win, the Lankan U19s were nine down for only 101 on the board. An unbeaten 37-run stand for the 10th wicket helped them to start with a win. England U19s, on the other hand, lost the tournament opener but bounced back with a win in the next games; both played against the West Indies team.

The game between Sri Lanka and England is likely to get affected by showers.

The Sir Viv Richards Stadium in Antigua has been a tough venue for the batsmen as no team has crossed 170 in the three matches. The first two matches saw the team batting first winning despite managing only 160. On Tuesday, Sri Lanka lost 9 wickets before chasing down the target of 138. We might not see any improvement.

Navod Paranavithana failed to make an impact in the first match. However, not picking him could cost big as he could pick a few wickets alongside opening the batting for the Lankans. Amshi de Silva claimed six wickets in the series against Bangladesh U19s across three matches. He also took 3 wickets in the first match of this tournament. Kasey Aldridge is the leading the bowlers’ charts with 7 wickets from 2 matches in this tournament. He also took five wickets and amassed 102 runs including a fifty during the Tri-series at home earlier this year. Skipper George Balderson took 6 wickets at an average of 10.66 with help of a 4-wicket haul. 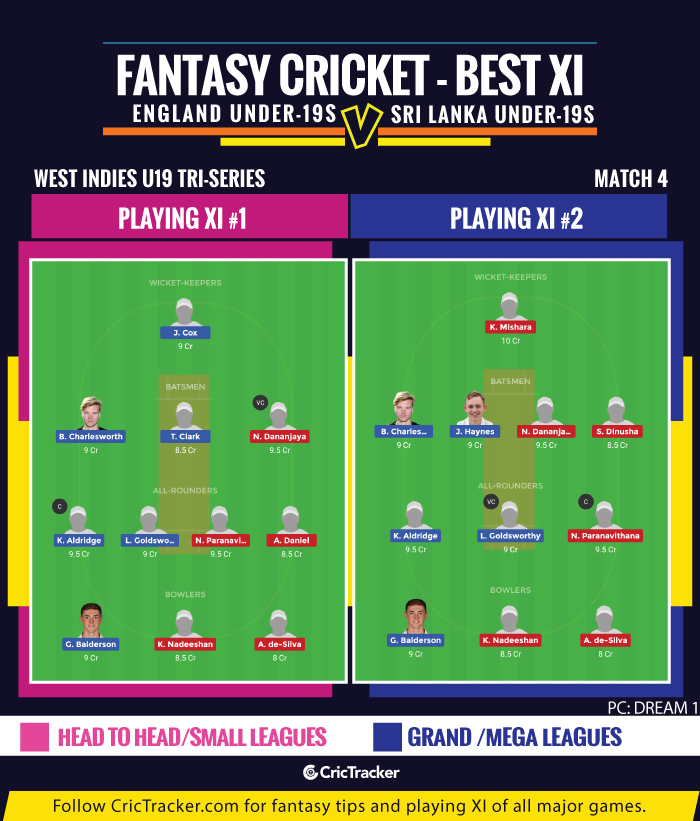 The pitches in Antigua doesn’t seem to get improve as the totals here are getting lower with every match. With three matches played in three straight days, we might not see any big totals in Antigua-leg games.

England Under-19s are expected to win a close match against the Sri Lankan team.