Both sides have got brilliant batting-units. However, with so much of rain around, bowlers like Bravo, Walsh or even Joshua Little can come in handy.

The third T20I of the three-match T20I series between West Indies and Ireland will be played at the Warner Park in St Kitts.

The caravan of the three-match T20I series between West Indies and Ireland will reach its business end when both sides will lock horns in the final T20I of the three-match series. After pulling off a six-run win in the first T20I, Ireland came into the second game with a chance to script history but the unrelenting rain in St. Kitts had its final as the game was finally abandoned.

More than Ireland, the washout in the 2nd T20I would have disappointed the hosts a lot more as they had a great chance to level the series after Kieron Pollard’s 4-25 and Sheldon Cottrell’s 2-10 had reduced the Irish to 9-147 in 19 overs. The West Indies were 1-16 in 2.1 overs when the rain arrived to serve as the final nail in the coffin, as the far as the result of the match was concerned.

It is expected to be another overcast day in St Kitts on Sunday. According to the weather report, Warner Park is set to be lashed with rain during the afternoon. While the temperature is set to be between 22 and 25 degrees Celsius, the humidity is set to hover around 82%. There is 20℅ chance of rain.

As we saw in the last game, batting wasn’t as easy as it was in Grenada. The ball was stopping a bit, and with the surface having endured so much rain in the past 24 hours, the moisture might come in play on Sunday.

Average first innings score:– 135 [In the last four games at the venue this season]

West Indies- Once again the onus will be on the likes of Shimron Hetmyer, Lendl Simmons, Nicolas Pooran and Evin Lewis to spearhead the batting unit. Dwayne Bravo [2-28] and Hayden Walsh [1-25] in the first game and Kieron Pollard [4-25] and Sheldon Cottrell [2-10] have the pick of the bowlers in the series thus far.

Ireland– While the openers- Paul Stirling, Kevin O’Brien give them a whirlwind start in the first game, it was their middle-order in the last game where the likes Andrew Balbirnie [36]and Gareth Delany [44] chipped-in. Joshua Little and Craig Young picked five wickets between them in the first game. These players can be picked in your Dream11 Fantasy team. 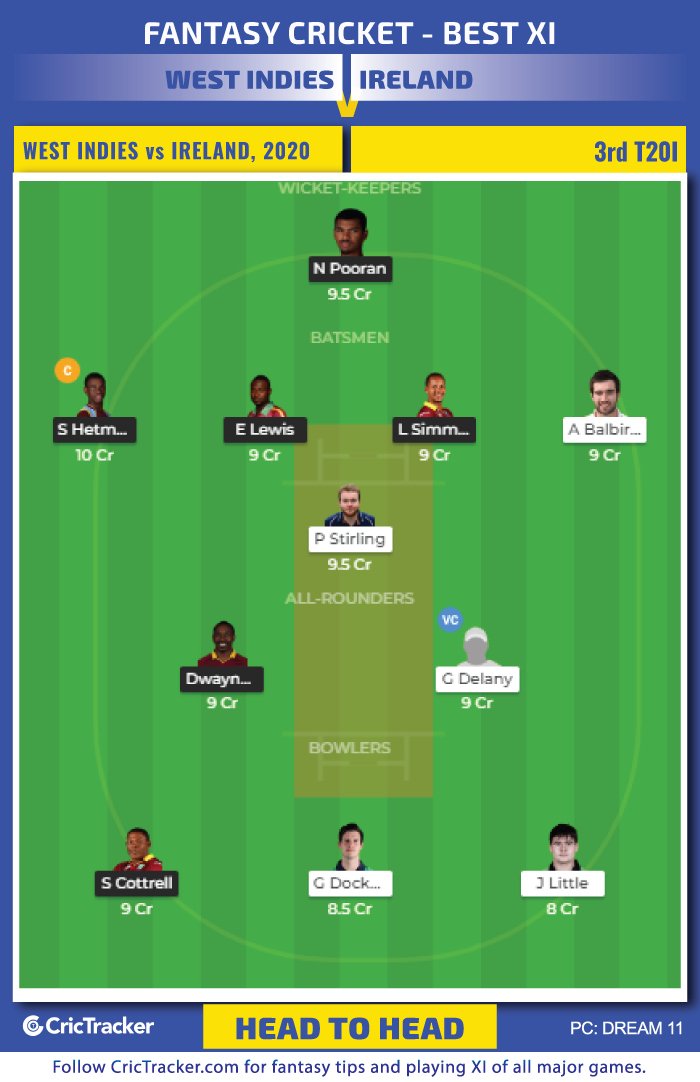 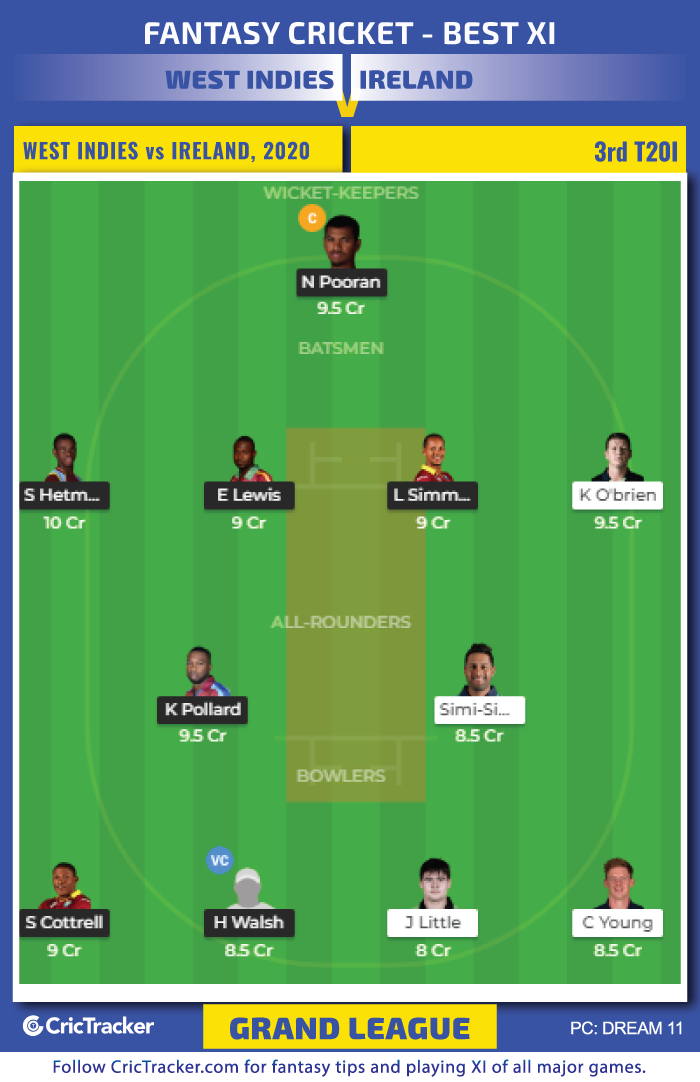 Both sides have got brilliant batting-units. However, with so much of rain around, bowlers like Bravo, Walsh or even Joshua Little can come in handy. Hence, opting for them as captain/vice-captain in your Grand league side would be a prudent punt.

West Indies is expected to come out as the winners.