Smriti Mandhana and Stafanie Taylor must be there in both your teams.

The 1st of the 5-match T20I series between West Indies Women and India Women will be hosted by the Darren Sammy National Cricket Stadium in Gros Islet, St Lucia.

There is not a lot of time left for the 2020 Women’s T20 World Cup. Preparations are in full swing for India Women as they gear up for a five-match T20I series against the West Indies Women. The team has been playing some great cricket in recent times. After having completely dominated South Africa just a few weeks back, they have started this tour of the Caribbean on a great note.

The team managed to bounce back after being 0-1 down in the three-match ODI series by winning the last two games. They will want to continue with this good work once again and register yet another victory in the first game. However, it is important to keep in mind that the West Indies Women are the current World Champions in this format. They might have lost to Australia recently. But, in their own den, they are extremely strong and tend to decimate oppositions. This should surely be a great contest to watch.

Showers are predicted throughout the day on Saturday. But the positive is that during the match hours, the chances of precipitation are comparatively lesser. Thus, we shouldn’t lose out on a lot of action and if fortunate enough, a full game can also be witnessed.

After about a seven-year gap, a men’s T20I was played at the Darren Sammy National Cricket Stadium earlier this year in March. The track seemed to be a really good one which had something in store for everyone. The new ball will be the key for both the teams and they should look to pick up some early wickets.

Smriti Mandhana, in this format of the game, is an undoubted top pick and opens the batting as well. Amongst the others, Harmanpreet Kaur and Stafanie Taylor are really good picks for your Dream11 Fantasy side. You can also go ahead with Hayley Matthew and Deepti Sharma. 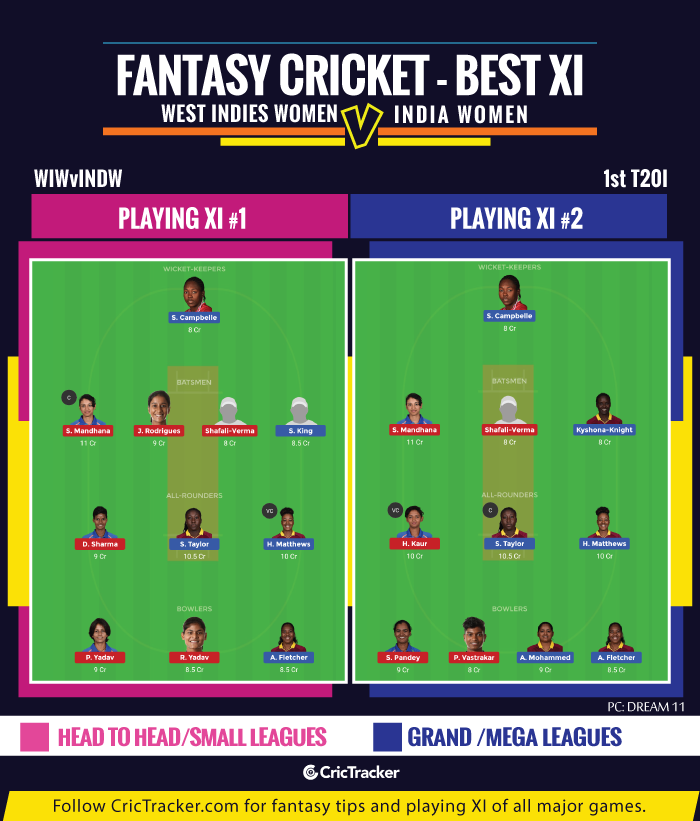 India Women are expected to win this game and take a 1-0 lead in the series.