All the statistical highlights from India Women’s 10-wicket win in the 2nd T20I against West Indies Women.

India Women took a 2-0 lead in the 5-match T20I series against the West Indies Women with yet another thumping win coming in less than 24 hours of the first match. Bowling first this time, India restricted the hosts to just 103/7 in 20 overs. Deepti Sharma claimed her maiden T20I 4-fer as she finished with figures of 4/10 in four overs. Shafali Verma once again took charge over the home team bowlers scoring 69* from only 35 deliveries. Smriti Mandhana remained unbeaten on 30* to take India through to a rare 10-wicket win as the duo completed the chase in only 10.3 overs.

All the statistical highlights from India Women’s 10-wicket win in the 2nd T20I against West Indies Women:

57 – India Women completed the chase with 9.3 overs to spare; their biggest victory in T20I cricket in terms of balls to spare. Their previous biggest T20I win by balls to spare came against Bangladesh in 2014 where India chased down the target of 66 runs with 45 balls remaining.

10 – Only the 2nd time India Women have won a T20I match by 10 wickets. Their first T20I win by 10 wickets came against Australia in the 2016 Melbourne T20I while chasing 66 from restricted 10 overs. This is also the first-ever T20I defeat for West Indies Women by 10 wickets.

2 – The Mandhana-Shafali pair became only the 2nd from India across Men’s and Women’s cricket to share consecutive century stands in the T20I format. Rohit Sharma and Virat Kohli added 100+ partnerships in the 2014 WT20 Group stage for the 2nd wicket.

3 – Number of pairs across Men’s and Women’s cricket to have share consecutive century stands including Smriti and Shafali in the T20I format. Brendon McCullum and Martin Guptill of New Zealand in 2011 and Kenya’s David Obuya and Steve Tikolo in 2012 are the other opening pairs with successive 100-run stands in T20Is.

Another quick-fire knock from Shafali:

26 – Number of balls Shafali Verma needed to complete her fifty in the 2nd T20I, the 3rd fastest fifty in the T20I format by an India Woman. The top two fastest T20I fifties by India Women are scored by Smriti Mandhana. 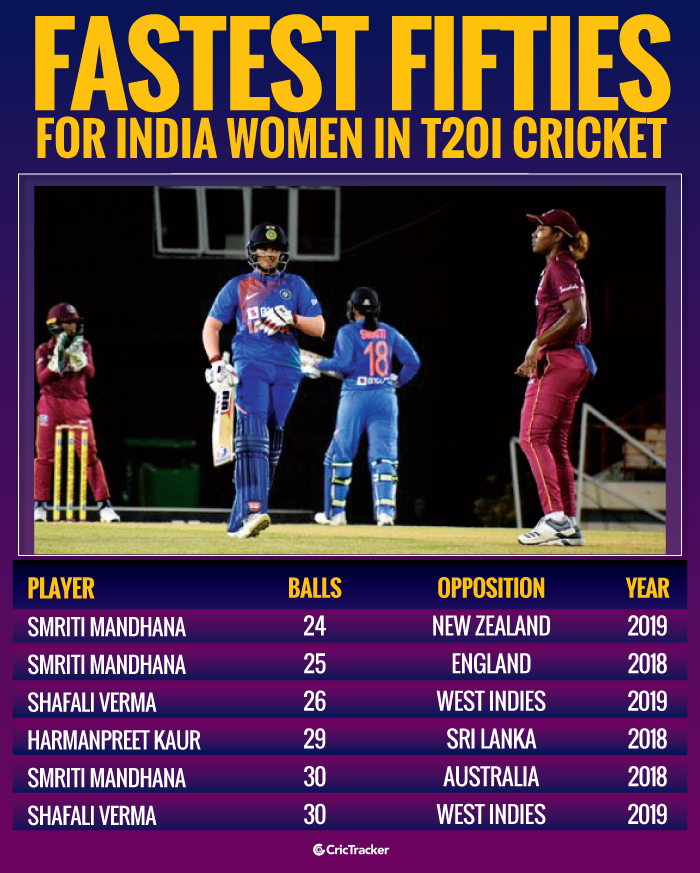 Deepti strikes with the ball:

22y 78d – At the age of 22 years and 78 days, Deepti Sharma became the 2nd youngest Indian Woman to claim a 4-wicket haul in T20Is. Priyanka Roy was 21 years and 203 days old when she took 5/16 in the 2009 WT20 game against Pakistan. Deepti already holds the record for being the youngest to claim a 4-fer in ODI format for India Women.