Smriti Mandhana is set to make a comeback in the 3rd ODI game.

The 3rd and final game of the 3-match ODI series between West Indies Women and India Women will be hosted by the Sir Vivian Richards Stadium in North Sound, Antigua.

India Women bounced back in the 2nd ODI with a big win to level the 3-match ODI series 1-1. India Women didn’t show any urgency as they crawled under 3 runs an over until 40th over. Punam Raut batted 128 balls for her 77-run knock which included only four boundaries. She shared crucial partnerships with Mithali Raj (40 off 67) and Harmanpreet Kaur (46 off 52).

They settled with a mediocre total of 191/6 in their 50 overs which turned out to be more than enough for a win. No batter barring Shemaine Campbelle (39) crossed 30-run mark for the hosts as they were restricted to 138/10 only. The West Indies Women continue to be marred by injuries as Natasha McLean was stretched off the field while batting and didn’t resume her batting.

Showers are predicted on Tuesday night at the Vivian Richards Stadium in Antigua. However, during the match, no threat of rain is expected. Clouds will be around the ground during the morning but will get cleared by 12 PM local time.

Both the teams struggled to score big runs during the 2nd on a track which was used for the 2nd game in a row. Over a fresh surface on Wednesday that too in the morning, we could witness a high-scoring game. At least 450 runs could be seen like during first ODI if India bats first.

Smriti Mandhana is set to feature in the 3rd ODI.

Hayley Matthews will play the 3rd ODI after completion of her ban.

Rajeshwari Gayakwad doesn’t get many opportunities but makes most of her every outing. She has taken 66 wickets from 39 ODIs at an average of 17.07. Smriti Mandhana and Hayley Matthews set to play their first game after a while. Anisa Mohammed holds the record for most 5-wicket hauls in Women’s ODI cricket. But she is not as consistent as her record suggests. She picked up only six wickets in last nine ODI innings with five of them coming in the first ODI of this series itself.

Deepti Sharma has been the most consistent player thus far taking two wickets each in first two games. 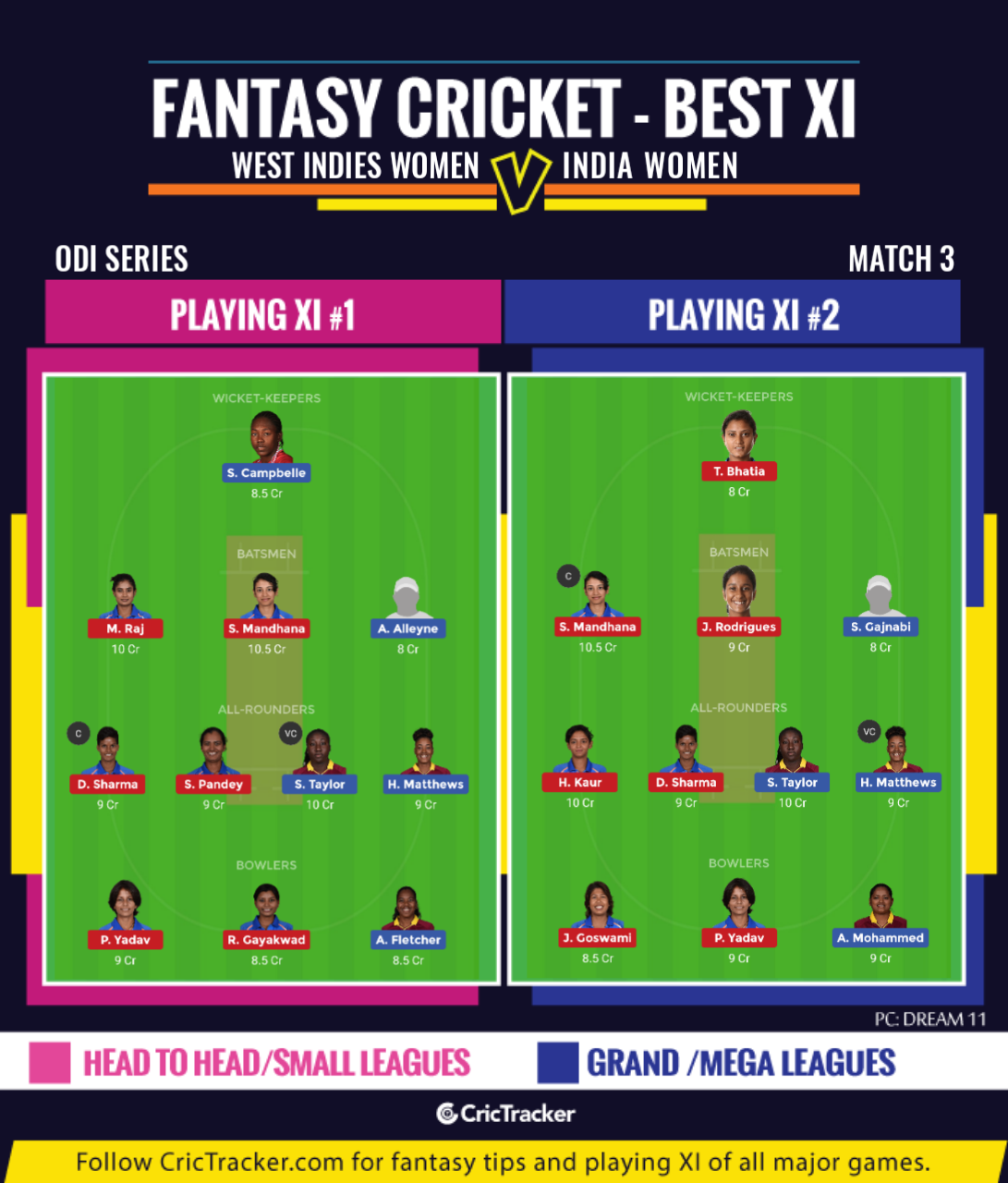 Smriti Mandhana will directly walk into the playing XI and open the innings alongside Jemimah Rodrigues. It will be interesting to see who among Priya Punia and Punam Raut will be making way for getting back Smriti. Both the players have scored a fifty in this series which makes selecting them in the fantasy team a risky/gamble effort due to lack of toss update before the deadline.

India Women are expected to complete a series win.