Considering India’s batting prowess, Taniya Bhatia shouldn’t get much time in the middle.

India Women and West Indies Women square off in the third T20I at the Providence Stadium in Guyana. While India looks to seal a series win with yet another clinical performance, their hosts will hope for a change in fortunes as they seek to keep the series alive. Although West Indies did strike the first blow in the ODI series, they have lost four consecutive matches in both formats.

To make matters even worse for them, Stafanie Taylor is ruled out of the series. Nevertheless, they possess a lot of talent in the squad although toppling the in-form duo of Smriti Mandhana and Shafali Verma would be a bridge too far. A good game of cricket beckons with the outcome of the series on the line in this crucial encounter between the two teams.

No rain is expected during the game with cloudy conditions on the forecast. A cloud cover and humidity of 55% and 82% is expected at the start of the game, according to AccuWeather while the temperature will range from 26 to 30 degrees Celsius during the course of the game.

As seen in the recently concluded Carribean Premier League 2019, the pitch here does favour the spinners. While the pacers would also get swing from the overlying conditions, it is a decent pitch to bat on. Teams will prefer batting second here with the ball coming on nicely as the game progresses.

Stafanie Taylor has been ruled out of the series

Shafali Verma and Smriti Mandhana have been rampant at the top of the order in both the games. While Verma has scored the fifties in both games, Mandhana has played second fiddle with 97 runs to show for her efforts. In the bowling department, Deepti Sharma has been the standout bowler with five wickets to her name.

With her added batting ability, she is a must-have player in the Dream11 Fantasy team. Although Hayley Matthews isn’t in the best of forms, she is West Indies’ best bet with both bat and ball. She is a valuable asset to any team and assures a good performance in Guyana 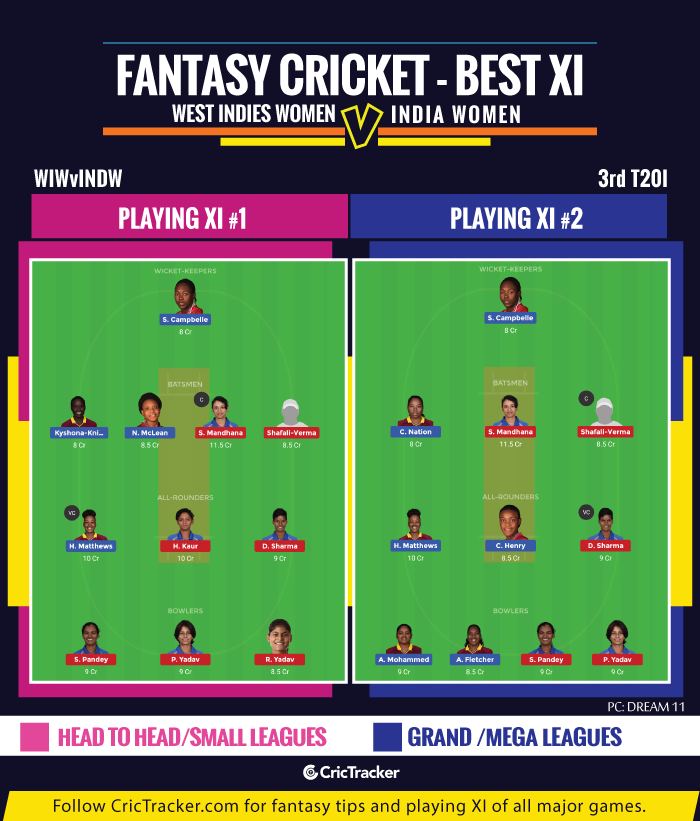 Considering India’s batting prowess, Taniya Bhatia shouldn’t get much time in the middle. Picking Shemaine Campbelle over Taniya Bhatia in your Dream11 Fantasy team would be ideal with the West Indian keeper being an able player of spin in the top order.

Also, a risky team can be made with India’s middle-order batters in your team. Harmanpreet Kaur can be made the captain of the team just in case Mandhana and Shafali Verma both fail.

Indian Women are favourites to win this match.