Both sides can ring in a few changes with the series already done and dusted.

The 5th game of the 5-match T20I series between West Indies Women and India Women will be hosted by the Providence Stadium in Guyana.

The final game of India’s tour of West Indies is scheduled in the late hours of Thursday as Harmanpreet Kaur and co eye a clean sweep. While the first two games saw Shafali Verma star for the Indians with two consecutive fifties, the script for the third and fourth T20I has been fairly similar.

With the West Indians struggling against the spin threat the Indians possess, they haven’t been able to compete with the hosts. The Indians will be expected to win the final T20I as well although the West Indies has shown signs of improvement over the course of the series and should pose a real threat in Guyana.

Rain is expected to play spoilsport once again although at least a shortened game should happen. The temperature should hover around 27 and 29 degrees Celsius with a cloud cover of 97% expected at the start of the match.

A slow track has been provided in the previous games and should be no different for this game. While the spinners are expected to play a major role in the game, batters will find it tough in the middle. Teams will prefer to bat first and make good use of the conditions upfront with the pitch slowing down as the game progresses.

Deepthi Sharma has picked eight wickets so far in the series with her off-spin causing a lot of trouble to the West Indian batters. She is also capable of scoring some runs in the middle order as well, which makes Deepti Sharma a valuable asset to any side.

Shafali Verma is the top runscorer in this series with 149 runs. With two fifties to her name already, she looks good for more runs in the final T20.

From the West Indian roster, Hayley Matthews is their best bet with bat and ball. While Hayley has been picking wickets regularly, she is crucial to their chances of salvaging some pride against the Indians. 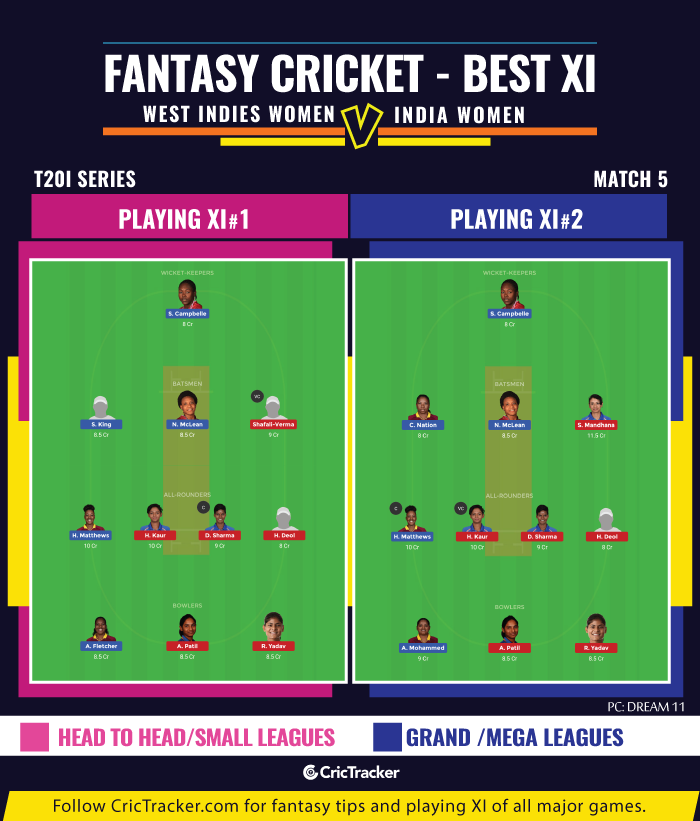 Considering the nature of the pitch, picking three of four spinners would be ideal with Deepti Sharma and Hayley Matthews already making a mark in the series with the ball.

Both sides can ring in a few changes with the series already done and dusted. Look out for the playing XIs until the last moment before finalizing your Dream11 Fantasy team.

India is favorites to win this encounter