Who will be the new T20 Champion? Watch T20 Final Live

Who will be the new T20 Champion? Watch T20 Final Live

Watch T20 World Cup final live on YuppTV and catch all the excitement. 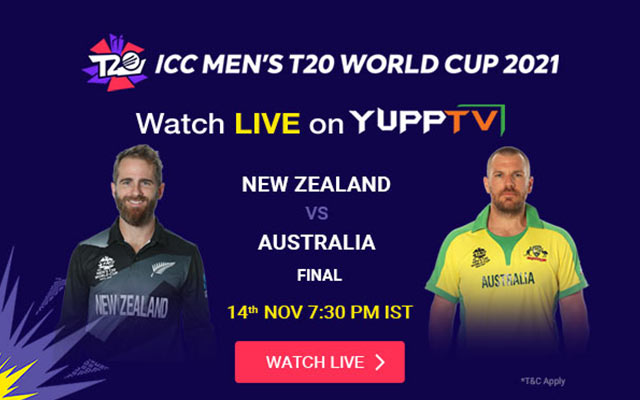 New Zealand had a memorable campaign in this edition of the T20 World Cup. Despite starting the league with a defeat over Pakistan, New Zealand bounced back and won against India and grabbed the entry ticket for the semifinals. Although England was everyone’s favourite in the first semifinal, the Kiwi batters played outstanding cricket and registered a clinical win over England with 6 balls to spare.

Opener Daryl Mitchell (72) and James Neesham (27 in 11 balls) ensured to stay till the end and won the game. Neesham taking on Chris Woakes, who bowled a brilliant spell till then for two sixes and a boundary, was the turning point of the match. Yesterday, Australia played brilliant cricket and outperformed Pakistan when Marcus Stoinis (40) and Matthew Wade (41 in 17 balls) sealed a victory in the penultimate over. Wade smashed Shaheen Afridi for three magnificent sixes and finished the formalities with 6 balls to spare.

The biggest challenge for Kane Williamson-led New Zealand is to break the World Cup final jinx and rewrite the history. New Zealand reached the 2015 and 2019 ODI world cup finals, but luck didn’t favour the Kiwis on both occasions. Kiwis managed to take revenge for 2019 final on Wednesday when they slammed England in the first semifinal and qualified for the final.

It’s time for the Blackcaps to avenge 2015 final on Sunday and settle the scores against Australia. For Aaron Finch-led Australia, which still dominates Test and ODI cricket, T20 World Cup was a tough pill to swallow. Despite reaching the 2010 T20 World Cup final, Aussies lost to England and this time, they will go all the way to grab their maiden trophy.

Watch T20 World Cup final live on YuppTV and catch all the excitement.