Why Rohit Sharma desperately needed the century against England

Why Rohit Sharma desperately needed the century against England

This is a hundred that is extremely important for Rohit Sharma. 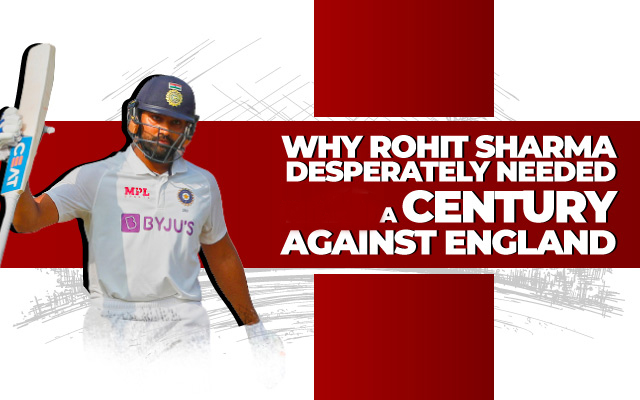 The crowd returned to the stadium for the second Test at the MA Chidambaram stadium in Chennai, and they made their presence felt by vociferously cheering on from the stands. And, for a major part of the first day’s play, their cheering was directed towards just one man.

Rohit Sharma unleashed shots of unmatched flamboyance and made us wonder if any other willow wielder can enthrall the viewer in the same manner that he did, on his way to a majestic 161 against England. And in the process, he also acted as the catalyst behind the Indian side piling on a total of 329 runs on the board in the first innings.

Rohit’s day out in Chennai

The ‘Hitman’ opened his account in a delightful fashion. Stuart Broad pitched the ball up to him, Rohit lunged onto the front foot and punched the ball past cover for a boundary. He had watched the ball till the moment it left his bat and struck the cherry right off the center of his blade. His second boundary was a shot that can be watched over and over again. Broad yet again pitched the hard new ball up to Sharma, and the opener hit the ball through the line past mid-off for a boundary.

And then, came a sizzling square cut off the bowling of Olly Stone. Stone pitched the ball short and provided some width to Sharma, and that was enough for the right-hander to pounce all over it. Sharma brought his fast hands into play and timed the cherry past point for a boundary. Rohit scored the first six of the match off the second ball of the 12th over. Ben Stokes bowled a short delivery without much pace, and in the murderous mood that he was in, Sharma dispatched the delivery beyond the mid-wicket fence.

Rohit got to his fifty off the fourth ball of the 15th over. Jack Leach delivered a low full toss, the right-hander bent low and dispatched the ball past the fielder at deep mid-wicket. He had scored his half-century off just 47 balls, and the Indian scoreboard at that time read 60/1. Such was the command that Rohit exhibited in the middle.

When Moeen Ali flighted a delivery, Rohit swept him all along the carpet powerfully past mid-wicket for a boundary. And then, came a nonchalant looking straight drive to a perfectly good delivery from Leach. The left-arm spinner tossed the ball up in the hope of getting some turn, but Sharma was up to the task. He leaned forward and drove the cheery straight past the bowler. It just seemed like a gentle push, but the ball raced away to the boundary.

And then, came the moment that made Virat Kohli (in the dressing room) and the entire stadium erupt. Rohit played the paddle shot off the bowling of Moeen Ali, and scampered through for a couple to complete a scintillating century.

Even after his century, Sharma continued to feast on the opposition bowling attack. And once again, it was the sweep shot that was unleashed. To a delivery from Moeen Ali that was floated up in the air and almost took an eternity to reach him, Rohit once again got low on his knees and swept the ball past the mid-wicket fielder to the boundary. India’s opening batsman scored his 150th run with a single to deep square leg and the stadium once again rose to applaud.

But then, off the last ball of the 73rd over, Rohit’s fairy tale innings drew to a close. And, it was his ‘go to’ shot throughout the day that proved to be his downfall. Rohit went for the sweep shot against the spin, off the bowling of Leach, but hit the ball straight down the throat of Moeen Ali at deep mid-wicket.

Why Rohit desperately needed the century

Now. This is a century that Rohit needed. And before proceeding further, let us look at Rohit’s scores in his last 10 Test innings in the table below. 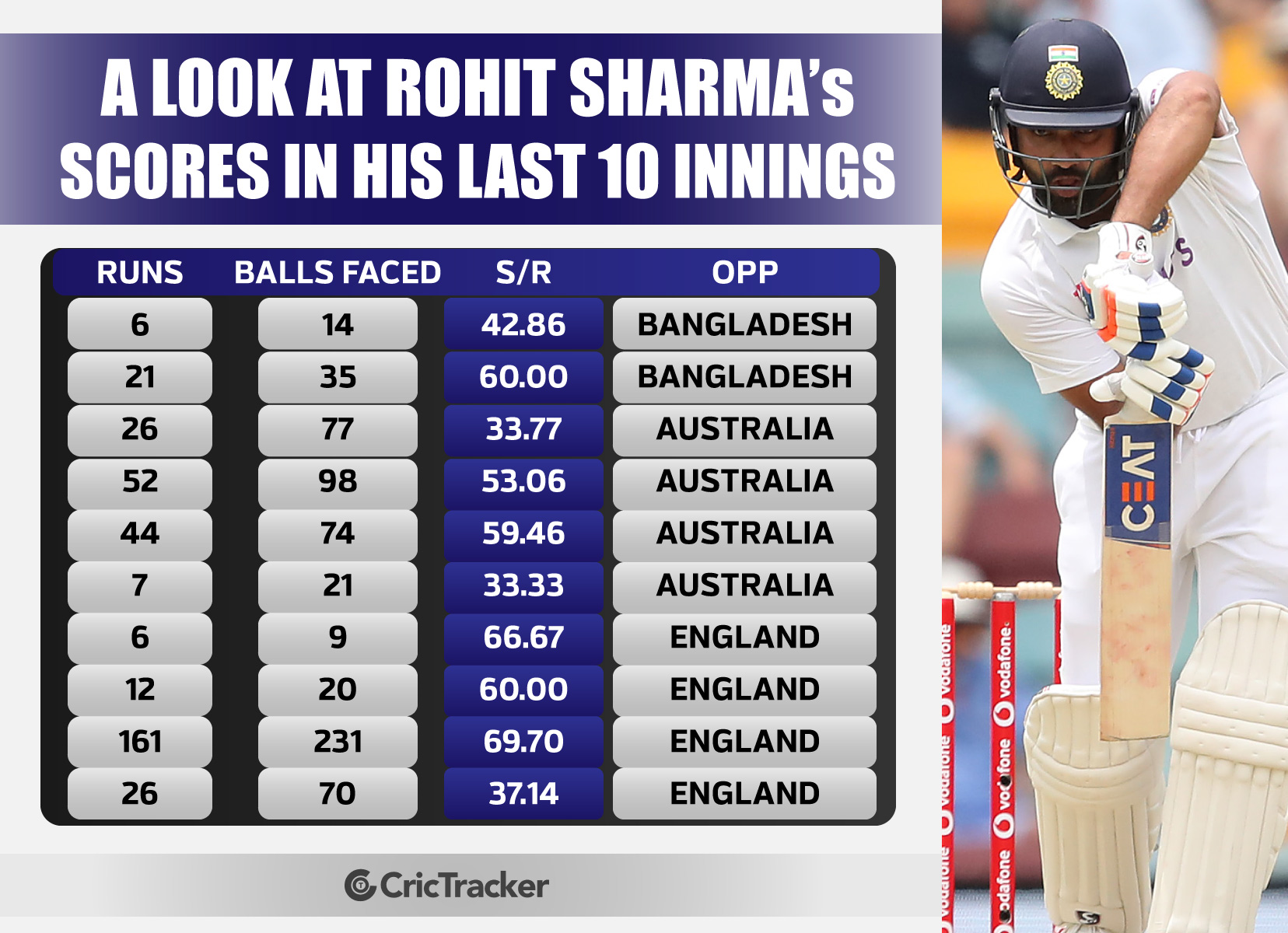 This table reveals how desperately Rohit Sharma needed a three-figure score. In his last 10 Test innings, the ‘Hitman’ has been dismissed for a score of less than 30 on 7 occasions. In both the innings of the first Test, Rohit had failed to get going, and there was a lot of pressure that was mounting on him coming into the second Test at Chennai. And, needless to say, Rohit has answered the world with his heroics with the willow in the first innings of the second Test. 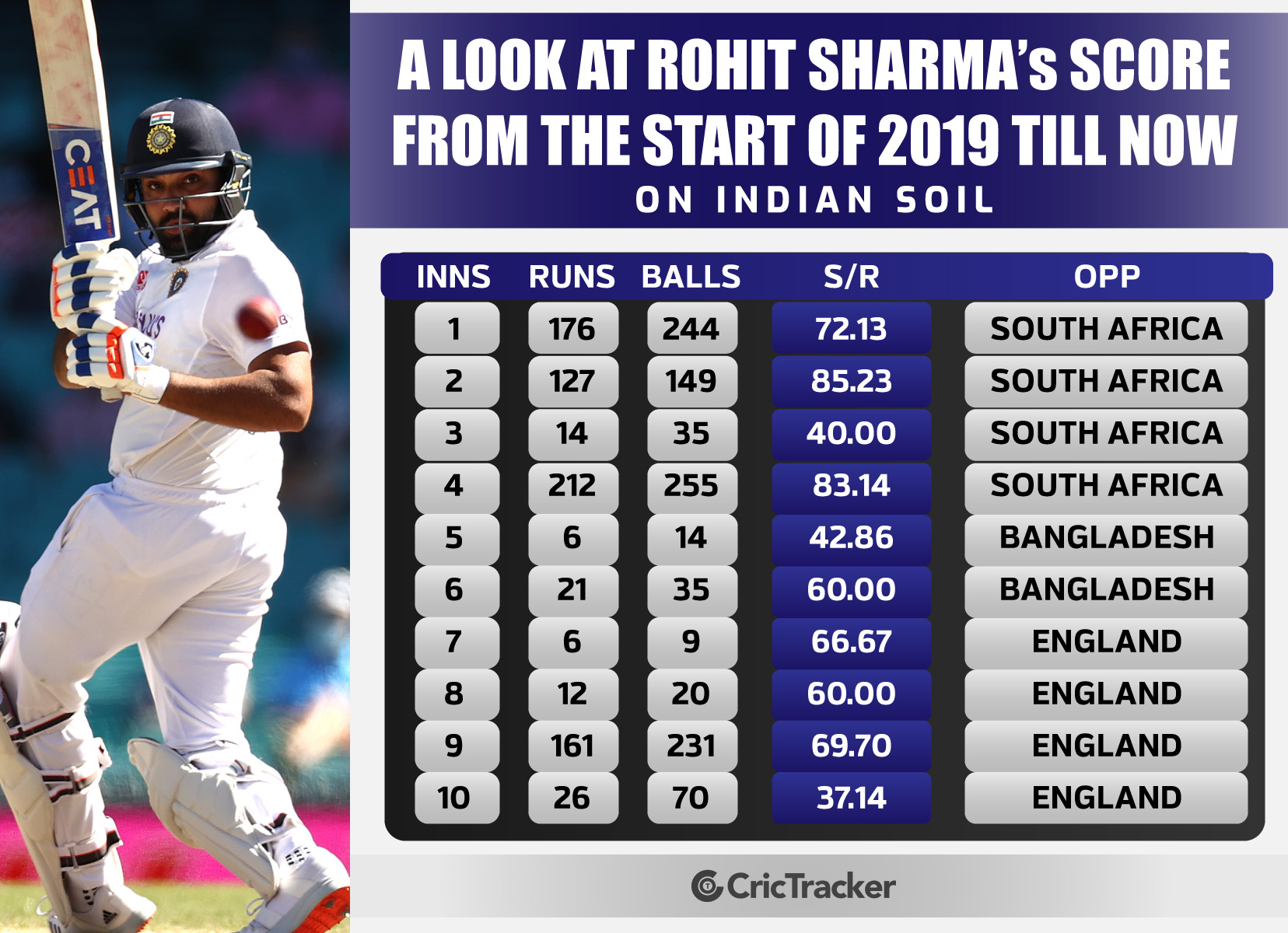 From the above table, we can see that Rohit has been in rollicking form since 2019 at home in Test match cricket. Since the start of 2019, he has played 10 innings and scored 761 runs at an average of 76.10 at home. In his last 10 innings, he has scored 4 centuries (including a double century), and on every occasion where he has gone past a century, his strike rate has been exemplary. In fact, his lowest strike rate out of the 4 centuries that he has scored at home is 69.70.

Now, Rohit’s stupendous run since 2019 will surely help him to solidify his position as India’s opener in Test matches played at home. He has scored his runs at a very good average, he has scored massive hundreds, and he has definitely allowed India to pile on the misery on the opposition. And, with his fantabulous century against England, Rohit has proven that he is surely India’s go to man on Indian soil.

And, this hundred has proven beyond doubt that Rohit is indeed the man who should open the batting in the longest format for India, at least in Tests played at home.

Note: All the stats have been taken from Howstat cricket and have been updated as on 16th February 2021