Can the 'yellow brigade' stand up to the challenges in the future sans their stars? 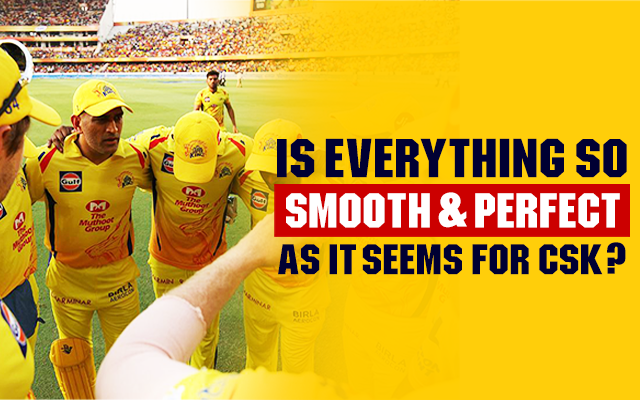 They are one of the most successful sides in the Indian Premier League(IPL). They are three-time IPL champions, have reached the finals on a staggering 8 occasions, and have reached the playoffs in each and every season that they have contested.

The Chennai Super Kings (CSK) outfit has been one of the toughest sides to beat in the IPL, and have in their arsenal an array of match-winners who can turn the tide in favor of their side in a matter of minutes.

But, is everything so smooth and perfect as it seems for the franchise?

Or, is there a major cause of concern for CSK to address?

The major cause of concern for CSK

One look at the CSK squad reveals that the ‘core’ of their side is on the wrong side of thirty, and many players are at the end of their illustrious careers. The legendary Mahendra Singh Dhoni is 39, and might maximum play another season or two. Their two top spinners, Harbhajan Singh and Imran Tahir are over 40 years of age and are at the fag end of their careers.

The side’s two star all-rounders, Shane Watson and Dwayne Bravo are both over 36 years of age and do not have a lot of cricket left in them. Even two of their front line batsmen, Faf du Plessis and Ambati Rayudu are over 34 years of age.

The biggest worry for Chennai will be the fact that the entire core team of players that made CSK a champion side will all leave around the same time. And, another major worry is, there is a lack of a worthy successor to lead the side once Dhoni walks into the sunset.

In fact, there is no side that has been as dependent on their leader as Chennai have been with Dhoni, and that might turn out to be a bane for them. And, the lack of proper succession planning might prove to be costly for them in the long run.

The contrasting example of Delhi Capitals

One side that can be stated as a stark contrast to that of the Chennai outfit is Delhi Capitals, who have invested a lot on youth. They have some of the finest young talents at their disposal, especially on the batting front. Their skipper Shreyas Iyer is just 25 years old and is a man blessed with a very calm temperament. Their hugely talented opener Prithvi Shaw is just 20 years old, and their big-hitting Caribbean recruit Shimron Hetmyer is not even 24. They also have in their ranks the explosive wicketkeeper-batsman Rishabh Pant, who is only 22 years old.

Even on the bowling front, Delhi does not even have a single pacer who is above 35 years of age. Their immensely talented foreign recruit Kagiso Rabada is only 25 years old, and the crafty Ishant Sharma is only 31. They also have rookie spinner Sandeep Lamichhane in their ranks, who is not even 20 years old.

In fact, apart from Amit Mishra, the Delhi Capitals do not even have a single player in their entire squad who is above 35 years of age.

So, the Delhi Capitals have built their ‘core’ side around people who will be around in the next decade and become the pillars of the side. This is something that the Chennai Super Kings have been unable to do, and this might harm them in the long run.

A good team is one that builds a side for the future and a team where the transition happens in a smooth manner. But then, with their entire core at the end of their careers, Chennai will surely find it tough to find replacements for the stalwarts who will walk away from the game very soon.

While Chennai have been a dominant side thus far in the IPL, it remains to be seen whether they can carry forward this domination into the coming decade as well.

Can the ‘yellow brigade’ stand up to the challenges in the future sans their stars?