Let us delve into some numbers to understand why Kohli should continue as the Indian skipper in Test cricket. 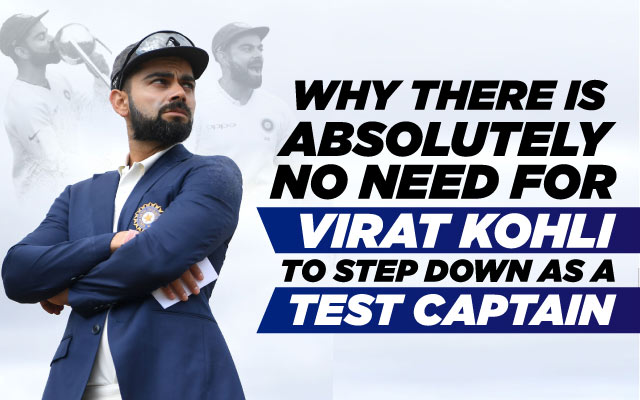 So, we are all ready with our daggers, right? Yes, the Indian side was thrashed at home. Yes, they were crushed by 227 runs in the first Test against England at Chennai. But then, is it fair to blame the captain alone?

In India’s second innings, it was Virat Kohli who put up a fight with the willow and scored a defiant 72, consuming 104 balls in the process. And, apart from Shubman Gill who scored a half-century, none of the other Indian batsmen even scored 20 runs. So, is it right if all of us point fingers at the skipper?

There were clamors to even replace Kohli as the skipper after the Australian tour. Yes, Ajinkya Rahane deserves a lot of credit for standing up to the task in the absence of Kohli and leading the side in admirable fashion in Australia. But then, there is no need to replace Kohli as the skipper. Kohli has one of the best records as the skipper in Test match cricket, and in case our memories are very short-sighted, it would serve us well if we can remind ourselves that India won their first Test series on Australian soil with Kohli at the helm.

And in this piece, let us delve into some numbers to understand why Kohli should continue as the Indian skipper in Test cricket.

Kohli’s record as the captain in Tests places him among the greatest captains to have ever played the game. In the table below, let us take a look at the players who have captained their sides for the most number of matches in Tests. From the above list, we can see that Kohli has an incredible record as the skipper. He has the third best win percentage as captain (57.89%) in the list (after Steve Waugh and Ricky Ponting). Kohli’s win percentage is higher than the likes of Clive Lloyd, Graeme Smith, Stephen Fleming and MS Dhoni, and these are some colossal names in the history of the game. Now, let us go ahead and look at some of the greatest Indian skippers and their records in Test matches to understand why Kohli stands way ahead of the rest. 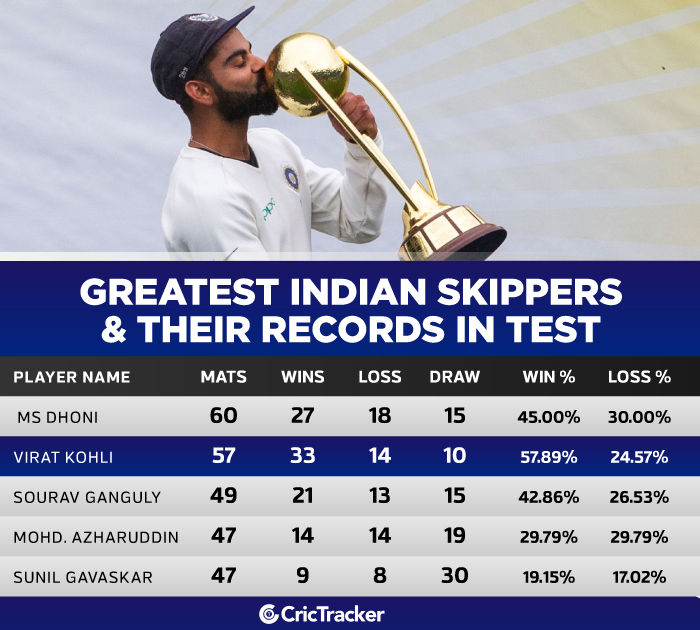 From the above table, we can see that Kohli outshines every other Indian captain. He is the only captain in the list to have a win percentage of above 50(57.89%), and also has a loss percentage of just 24.57%. In fact, no Indian Test captain has won more than 30 Test matches as captain except Kohli (33). With such incredible numbers, there is absolutely no reason for Kohli to step down as the skipper.

Captaincy and Kohli’s form with the willow 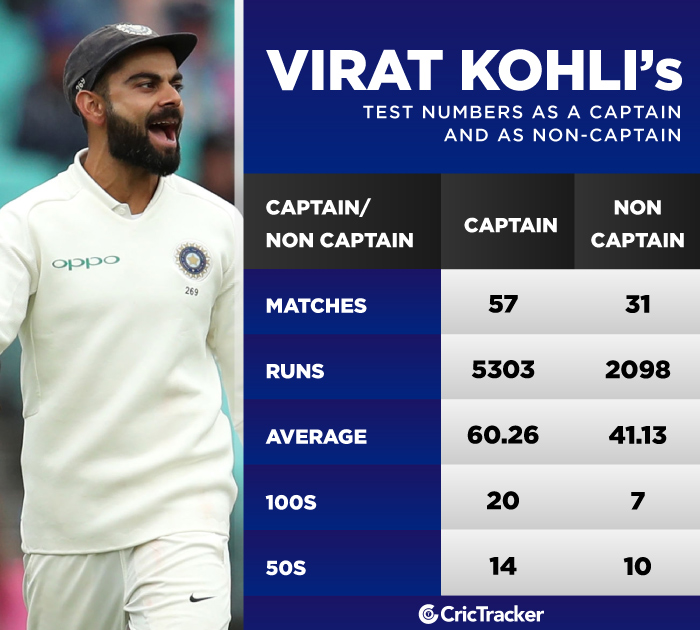 The conclusion from the table is crystal clear, isn’t it? Kohli thrives with the bat when he is given the responsibility of leading the Indian side. As captain, he has already scored 5303 runs in Test cricket and has scored his runs at an average of 60.26. 20 out of his 27 Test hundreds have come as the skipper of the side. As non-captain, Kohli averages just 41.13 and has scored only 7 hundreds. So, Kohli enjoys leadership, he enjoys the challenge of taking on the opposition leading the side. And surely, the numbers don’t lie here.

Now, let us not stop here. Let us go ahead and compare Kohli against the best captains in history. In the table below, let us take a look at players who have scored the most runs as captain in Test cricket. 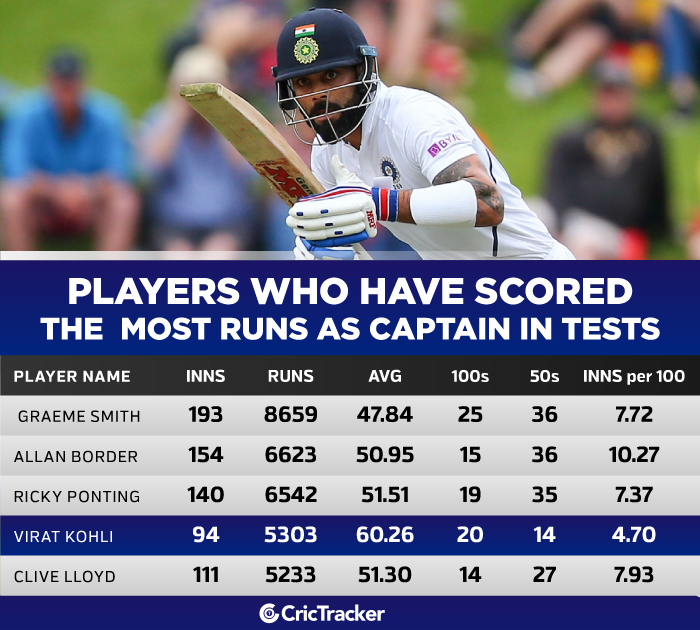 If you need further proof, just analyze the table. Kohli is the only player in this elite list to average more than 60 as the captain in Test cricket. Also, he scores a Test century every 4.70 innings as captain, and none of the other names in the list are even close to him. Ricky Ponting stands a distant second, scoring a hundred every 7.37 innings in the whites. Kohli already stands fourth in the list of players with the most Test runs as captain, and if he scores another 1321 runs, he will occupy second place.

Kohli came back to India after the first Test in Adelaide to attend the birth of his daughter. And, in his absence, Ajinkya Rahane led from the front in a stunning manner. But then, a deep dive into the numbers has given us conclusive proof that there is absolutely no need for Kohli to step down as the Indian skipper.

He thrives with the willow when the added responsibility of leadership is thrust on him, he has one of the best win percentages as captain in the history of the game, and he is arguably the greatest Indian Test captain. Kohli will, and should continue as the skipper of the Indian Test side, and there is no doubt about the same.

Note: All the stats have been taken from Howstat cricket and Cricinfo and have been updated as on 9th February 2021