Aaron Finch finally arrived on the big stage and batted extremely well in the 4th T20I. 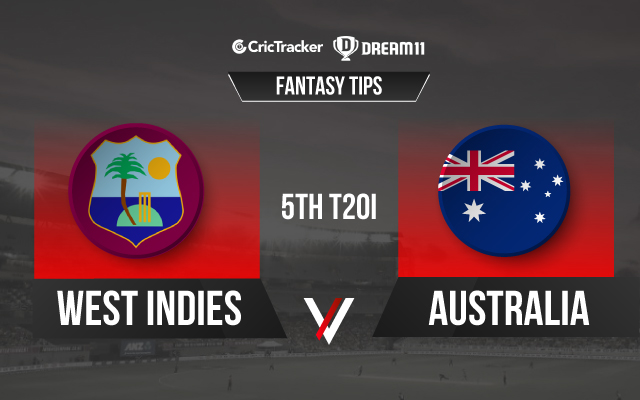 West Indies had almost pulled off a victory in the 4th T20I, but a dramatic final over changed the course of the game in favour of Australia. Since the series was already secured, West Indies rested a few key players and tested their bench strength in the last match. They have already won the series 3-1 and will be keen to make it 4-1 by winning the 5th T20I.

Australia can sense some sort of relief, as they have avoided a potential whitewash. With only 11 runs to defend in the final over, Mitchell Starc bowled well and brought the first victory for Australia in this series. Mitchell Marsh has been the best performer in this Australian T20 side.

Wind will play a major role in this match. The surface again proved in the 4th T20I that it is one of the best sporting wickets in the West Indies. Chasing is a tough job on this surface, and hence, whoever wins the toss should bat first.

Lendl Simmons played a top-quality knock in the 4th T20I and brought up the 9th half-century of his T20I career. He struck 10 fours and 2 sixes, before he was caught at the deep mid-wicket boundary line for 72 runs.

Aaron Finch finally arrived on the big stage and batted extremely well in the 4th T20I. He scored 53 runs from just 37 balls, which included 5 fours and 3 sixes.

Fabian Allen almost turned the match in the favour of West Indies in the 19th over of the match in the last game, where he hit 3 consecutive sixes against Riley Meredith. He is a useful bowler and excellent fielder as well.

Mitchell Marsh has completely utilized the opportunity he got and has scored 3 half-centuries in this series. He has been exceptional with the ball as well. Overall in this series, the all-rounder scored 189 runs at an average of 47.25 and has picked up 6 wickets.

Hayden Walsh has made a habit of picking big wickets in this series. He has scalped 11 wickets in 4 matches at an economy of 6.06, with the best figures of 3 for 23.

Adam Zampa has proved that he is still the no. 1 spinner for Australia in the T20 format. In the 4th T20I, he picked up the important wicket of well-set Evin Lewis, and later on, he dismissed Andre Fletcher.

Stand-in skipper Nicholas Pooran led the side really well in the absence of Kieron Pollard. He has contributed 65 runs with the bat in 3 innings so far this series.

Evin Lewis played some mind-blowing shots in the 3rd T20I and scored 31 runs from just 14 balls. It’s worth a risk to pick him as your fantasy team skipper.

Hayden Walsh is the leading wicket-taker in this series with 11 scalps. You can take a risk and pick him as your fantasy team skipper.

Since plenty of options are available in the bowler’s category, it’s hard to pick Oshane Thomas in the final eleven.