Jason Holder is the no.1 Test all-rounder and you should include him in fantasy team without hesitation. 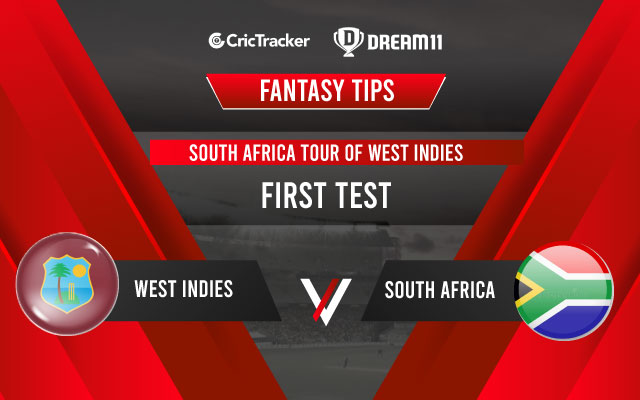 The first Test between West Indies and South Africa is all set to be played at the Daren Sammy National Cricket stadium. The ground has not hosted a Test since early 2019 when England beat West Indies. This will be a great occasion as international cricket returns to the country of St Lucia.

South Africa has come into this series with a new captain, Dean Elgar, who was handed over the Test captaincy with the subsequent removal of Quinton de Kock. His counterpart, Kraigg Brathwaite has a bit more experience in the leadership role. While South Africa’s last Test assignment was a 2-0 defeat in Pakistan, West Indies played out a 0-0 drawn series at home against Sri Lanka.

The wicket in Gros Islet offers some bounce to the bowlers with the new ball. The batsmen need to see off the initial swing on offer. The new and hard ball can also jump on the batsman making it difficult for them to play. The wicket will even out as the match progresses.

Dean Elgar will be excited to step up and make some runs for his side after getting the captaincy. He has scored 4260 runs in 67 Tests at an average of 39.44.

Nkrumah Bonner has been highly impressive since his debut for the West Indies. He has played only four Tests but scored 375 runs, with a hundred and two fifties.

Jason Holder is probably the most improved cricketer that we have seen in recent times. He is the no.1 Test all-rounder. He has been highly inspirational for this side in the last few years.

George Linde is someone who can just make things happen, with the bat, with the ball, and on the field. In three Tests, he has scored 135 runs and picked nine wickets, both at a respectable rate.

Kemar Roach is just the bowler you need in these conditions. He was in superb form with the ball in the recent county championship in England. He has 214 wickets in 63 Tests at an average of 27.72.

Kagiso Rabada is a definite match-winner. He will enjoy bowling on these pitches where there is some bounce on offer for the pacers. He has 202 wickets in 47 Tests at an average of 23.66.

Quinton de Kock is the more experienced wicketkeeper between himself and Joshua de Silva. Because he will bat lower down the order, we can expect to see some fireworks from him.

Kieran Powell hasn’t played a Test match for sometime and how well his game has been shaping up coming into this match is anybody’s guess. In fact, this will be his first Test in three years.

Aiden Markram is an excellent batsman and has shown his class. The problem is that he isn’t consistent with that ‘showing his class’ part. Hence, it is risky to make him the captain.

Wiaan Mulder has been impressive in domestic cricket which has allowed him a spot here but whether his game is yet ready to make an impact in Tests overseas is something that can’t be said for sure.