Windies vs Bangladesh, 2nd ODI, Match Prediction – Who will win the match Windies or Bangladesh?

Windies vs Bangladesh, 2nd ODI, Match Prediction – Who will win the match Windies or Bangladesh?

Can Jason Holder & co bounce back to level the series?

Bangladesh once again proved that ODI format is their comfort zone as they defeated Windies by 48 runs in the first of the 3-match ODI series. The visiting side was well behind the Caribbean during the Test series but made the difference straight away after the change in format. The strategy of keeping as many wickets as possible till the end made difference for Bangladesh who scored 51 runs in the last 2.2 overs after missing out on scoring opportunities in the earlier overs.

Windies’ inability of picking wickets in the middle overs was exposed as Tamim Iqbal and Shakib Al Hasan strolled till the 45th over after an early wicket. They are expected to be a bit more aggressive with the bowling changes which they did in the first game. Windies also need either of the top order or middle order to take the things through. The hosts lacked one big partnership during the first ODI leaving too many runs to chase for their long tail.

The average first batting score in the last four ODI matches played at the Providence in Guyana has been 275 but no team managed to touch 200 in the three day/night matches played at this venue in 2016. This could indicate towards the chances of the pitch being slower when compared to the track in the first ODI.

Despite a big defeat, there is very less about which Windies could tinker towards their playing combination. All-rounder Rovman Powell, who didn’t bowl an over and bagged a duck in first ODI, could be replaced with a specialist batsman. They might also eye on getting in Keemo Paul who could be handy with his pace under lights.

Bangladesh wouldn’t like to change the winning combination but bringing Liton Das could give them some extra freedom for Tamim Iqbal to build the innings. Liton is known for playing his shots upfront, could come in place of Anamul Haque, who bagged a duck in the first ODI.

The prediction is for the team batting first to end up as the winners. 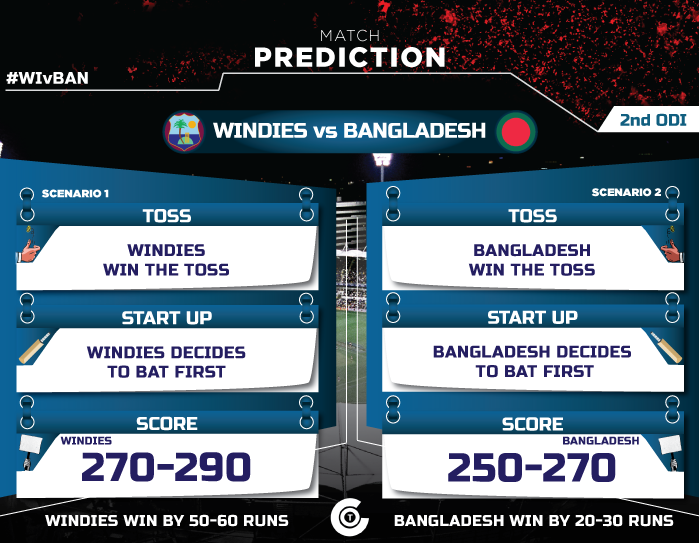