What sort of a pitch will be laid out for the first Test between Windies and England in Barbados?

After a 3-0 win in the Test series against Sri Lanka away from home, England will now aim for their first Test series win in Windies since 2004 as they face the Caribbean team in the 3-match Test series. Despite a comfortable series win, the English team still has a lot of issues to address with regards to their selection strategy. They are confused between the selection of James Anderson and Stuart Broad as only one of the two players would make it to the playing XI.

Anderson bagged only one wicket across the two Tests he played in Sri Lanka. Stuart Broad, on the other hand, is ineffective on the slower tracks which makes him sit out of playing XI whenever they encounter such playing conditions. The Windies pitches have of later been on the slower side. However, use of the duke balls will bring the legendary England pace-duo into the equation.

England are also straining themselves over the selection of the batting order. Jonny Bairstow scored a century at No.3 in Sri Lanka while Ben Foakes put on a brilliant all-round display in that series.

The first game of the 3-match Test series between Windies and England will be hosted by the Kensington Oval, Bridgetown in Barbados.

The game will be live on Sony Network in India. (Live streaming in Sony Liv)

The pitch report on the eve of the Test by Nassir Hussain suggested it will be more or less a turning track. There was not a lot of grass present on the surface about 24 hours prior to the game. There are some cracks visible and could open up as the game progresses.

Windies might pick Roston Chase as the 2nd spinner and the 5th bowler of their XI.

England is expected to go with two specialist spinners based over the early look of the pitch.

Sam Curran was the Player of the Series for his impactful contributions during the home Test series against India. He showed his skills with the bat during the series against Sri Lanka as well. Curran will be a valuable asset for England and could share the new ball with one of Anderson or Broad. Curran’s at his best when opening the innings.

2018 was a dream year for Jason Holder with both bat and ball. He picked up 33 wickets in only six Test matches last year with a brilliant average of 12.39. He also scored 336 runs at an average of 37.33. Joe Root improved as well towards the end of the year in the longer format and is also expected to have a good series.

The two captains aptly fit the roles of captain and vice-captain in Fantasy cricket. The England players Sam Curran, Ben Stokes and Jos Buttler are alternatives for the multiplier roles along with the Windies players Shannon Gabriel and Kraigg Brathwaite. 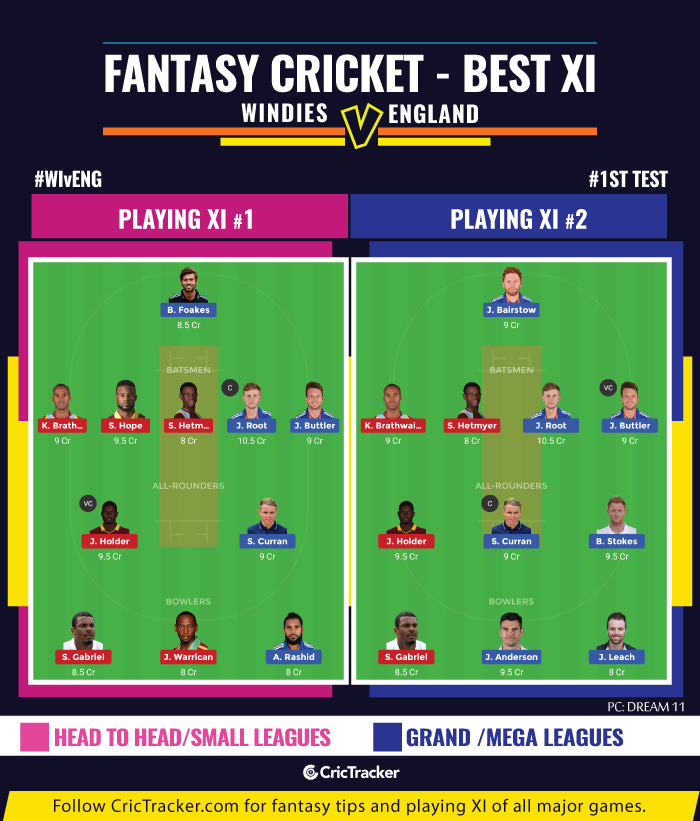 England decided not to announce their playing XI in advance as they want to pick it based on how the pitch looks like at the toss. Pick only those England players who are certain of making it to the XI, those are Joe Root, Ben Stokes, Jos Buttler and Sam Curran.

England would start as favourites despite Windies’ record in Test cricket at home.