Ben Stokes is still doubtful for this game.

An abandoned third ODI gave both the teams a breather in what has been a brilliant ODI series in terms of competition so far. The series is locked at 1-1 and the side winning this game will also not lose the series and the Caribbean would certainly be up for the challenge. Andre Russell is back for them for the last two matches and he will walk into this team on any given day.

England, on the other hand, are still fretting over Ben Stokes’s fitness who wasn’t in the playing XI for the third ODI which was washed out. Alex Hales will be the unlucky one to miss out if the all-rounder gets fit while Tom Curran was also left out after a solitary failure for Chris Woakes. It will be interesting to see if the visitors change the playing XI from the last game without playing.

The fourth game of the 5-match ODI series between Windies and England will be hosted by the National Cricket Stadium in St George’s, Grenada.

Kemar Roach is ruled out of the series while Stokes is still doubtful for this game. Andre Russell added to Windies squad.

Joe Root vs Windies in ODIs: 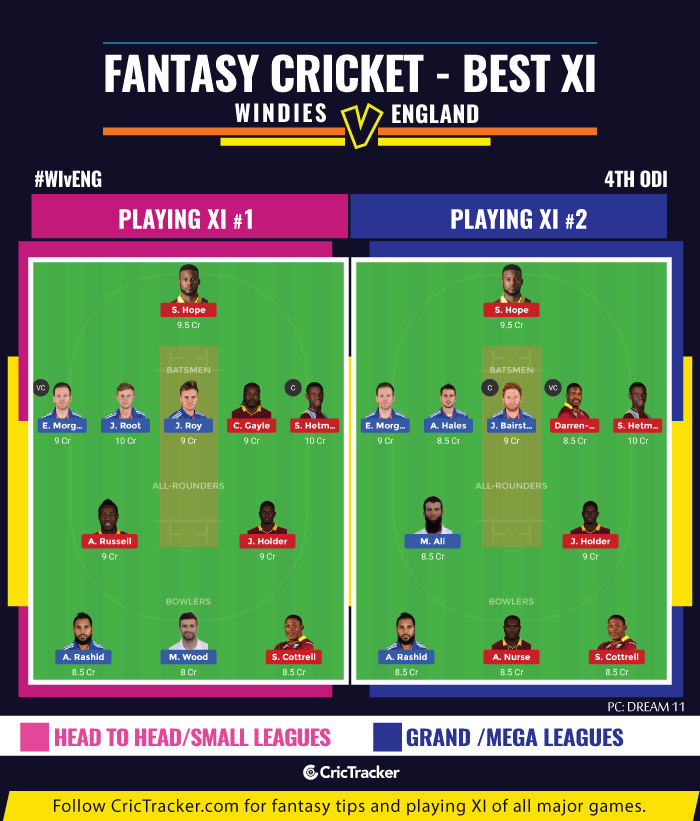 Adil Rashid’s credits have been come down from 9 to 8.5.He can be picked in the same team of Gayle, Root, Roy, Morgan andHetmyerwho collectively cost 47 credits.

England are expected to win but not before Windies push them into the corner.

Get the latest Cricket News and updates from the Windies vs England series, Match Predictions, Fantasy Cricket Tips and lots more on CricTracker.com.