The second game also will be played at the same venue as the first.

The first ODI between Windies and England was a fan’s delight. Over 720 runs were scored in the game and three batsmen registered emphatic centuries. In the end, it was the Brits who ended on the better side of the result and also recorded their highest successful ODI chase in the process. Yet, it is just one game into the series and four matches are still to be played before the winner is decided.

Going forward, the two sides will meet each other again on Friday for the 2nd ODI in Barbados. The visitors will be riding high on confidence but have a few issues to sort with their bowling. Most of the bowlers didn’t execute the plans well and conceded a lot of runs. Moreover, a dangerous player like Chris Gayle was dropped twice in the same innings, something which is unacceptable.

As far as the Windies, captained by Jason Holder, go, they will be ruing the five catches they spilt in the opening game. Both Jason Roy and Joe Root were provided with two lives each. They went on to register big centuries taking the game away from the opposition. The fielding is where the hosts need to concentrate better while the bowlers will look to bowl tighter lines.

The second game also will be played at the same venue as the first. The pitch at the Kensington Oval is an absolute road with no evidence of grass. The ball comes onto the bat nicely and the batsmen can hit through the line comfortably. The weather will be sunny in the morning and it will get cloudy as the game progresses.

With Chris Gayle coming back in, the Windies batting order looks quite strong. It will only get fiercer once Evin Lewis also joins the team. Until then, John Campbell has got an opportunity to make his mark before the World Cup. Shai Hope will continue to be the key player in the middle-order supported by the likes of Bravo, Hetmyer and Pooran. The home team might ponder over bringing Fabian Allen into the eleven instead of Bishoo. Allen adds up in the batting line-up and can also open the bowling if required.

The England team looks to be sorted ahead of the World Cup 2019. However, there are one or two positions in the all-rounder/bowling department that are still to be addressed. The team might have missed a trick by not playing Tom Curran in the first ODI. He is coming off a great BBL season and might replace Liam Plunkett, who went for plenty in the first match, in the upcoming encounter.

The prediction is that the Windies will bounce back and win the second game. 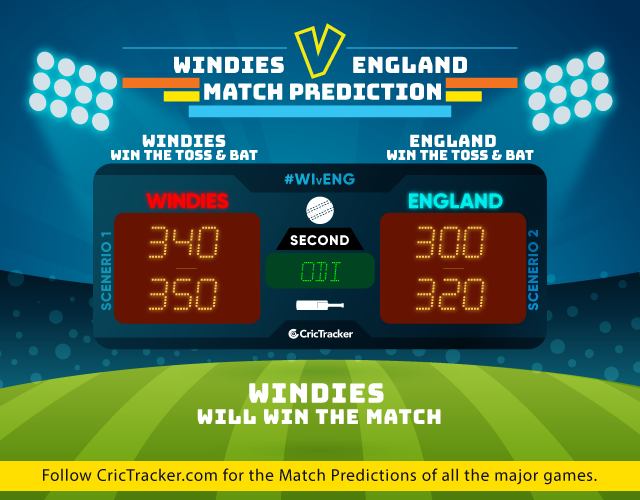