Windies would be looking forward to levelling up the series at St. Lucia.

After a high scoring encounter in the 4th ODI between Windies and England, both the team will be looking for fifth and the final match before the T20I series starts. This series has been one that will be remembered for ages, whether it is Gayle storm or Jos the Boss destruction, we have seen all of it.

England started in an emphatic fashion, Bairstow was brilliant against the new ball and Hales soon joined the party. They put up a show of sorts but that was absolutely nothing in comparison to what was about to follow.  At 30 overs, England were 194/3 with 20 overs remaining all the cricket pundits thought of a score of about 320-340, but some mind-boggling hitting from Morgan (103 off 88) and Jos Butter (155 off 77) put up a massive total of 419 runs on the board.

The second half of the innings was even interesting, Windies lost two early wickets in their pursuit of 419 but the Universe Boss was at his lethal best. He was smashing sixes just like his earlier days, though England had more than enough runs on the board, but the kind of for he was in, the target of 419 was looking well within reach.

But Stokes smashed the stumps of Gayle and that triggered a collapse. Nurse and Brathwaite put up a brilliant partnership for the seventh wicket and at 389-6, Windies were back in the driving seat. In that crucial stage, Rashid in the 48th overturned the game on his head as picked up four wickets in five balls and sealed the match for England.

The pitch at St Lucia is a good cricketing pitch, it will help both, batsman and bowlers. But keeping the trend of the series in mind, a score of above 280 is par. 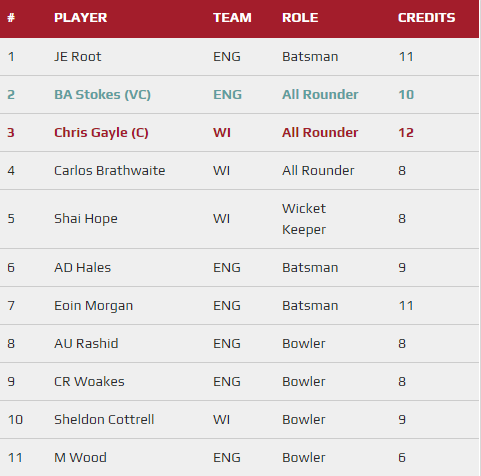 Rotobash Prediction: Windies have shown consistently good performance so expect them to bounce back in the final match.