WIPL versus WBBL: A setback for the Women's cricket

WIPL versus WBBL: A setback for the Women’s cricket

The fate of women getting churned in the battle of Boards? 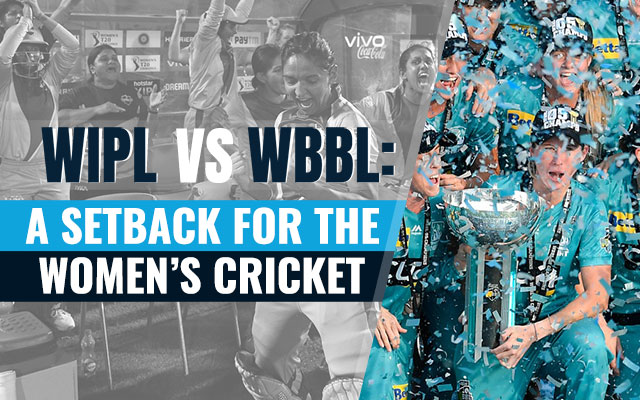 The BCCI’s decision scheduling a Women’s T20 Challenge during the playoffs stage of IPL 2020 must be welcomed, however, not with wide arms. This will be the first instance after the celebrated and historic T20 World Cup final at the Melbourne Cricket Ground in March this year that women cricketers will be back in action.

Recently, the BCCI president Sourav Ganguly had confirmed the intentions of the board explicitly, when he said “the women’s IPL is very much on”. It was subject to the government nod which they have received now. With the dates of fixtures yet to be finalized, the call regarding the participating teams lying in pendency, and the absence of a national selection panel; more needs to be done than what has been thus far.

Although the move has been welcomed by many in the cricketing sorority, there are glaring concerns that have left a bitter taste in the mouth of others.

The tale of tensions

The tale of tension between the Cricket Australia (CA) and BCCI have been surfacing ever since the first edition of Women’s T20 Challenge last year. The rift was widened when CA, citing the start of the year to be the peak home season, had raised objection on Australia touring India in January 2020 for an ODI series. Resultantly, the Australian players were abstained from taking part in the women’s exhibition games and the series did not materialize.

Similar tensions appeared between the boards over the clash of ICC Men’s T20 World Cup (scheduled in Australia) and the Men’s IPL. However, the ICC postponed the T20 World Cup and the pathway of IPL eventually got cleared. Long story short, the relations between two boards have been topsy-turvy and even though it is not an apparent power battle, there have been ups and downs on the way.

The Women’s T20 challenge is all set to clash with Women’s Big Bash League (WBBL) scheduled from 17th October to 29th November. While the move of scheduling a women’s IPL and giving due recognition to Women’s cricket is appreciable and thoughtful, the reason due to which the tournament has been scheduled in a way to leave the players choosing between two prominent short-format leagues will never be understood.

The undesirable clash between two credible events must be eschewed and when the solutions come so easy, needless to say, they must be exercised keeping in mind the greater good of all.

The year has been catastrophic enough to dry up the earnings and revenues of even the mightiest cricket institutions, let alone players. Making the players opt one in WIPL or WBBL is snatching a monetary exploit from their hands rather arbitrarily. There is no reason why the players should not be allowed to contest in both the leagues to not just express themselves but also push for competitive bidding prices for the services they offer to their franchises.

The collision of the two tournaments only adds to the abject state of affairs that the women’s cricket sustains in. Women have much lesser opportunities to earn from cricket when compared with men; to trim down even these limited opportunities, no matter the reason, is pitiable.

The IPL is a marquee event known for soaring viewership and insane Television records throughout its duration. Therefore, scheduling the women’s game towards the start of the edition in September would have been an idea far better than club it with the business end of the men’s game.

Stereotypes die hard. To think that the women need the back of men’s IPL is, in all fairness, an exaggerated assumption. It is but abstruse to think on these lines in the aftermath of what the world witnessed in the T20 World Cup final last year at MCG: a jam-packed MCG for a women’s game!

The game of cricket has been dominated by men for ages. Initiatives such as Women’s IPL will make women’s cricket flourish and grow in stature, and by giving the women a pedestal parallel to the men’s IPL, the BCCI has endorsed women’s cricket as a product equally worth investing as the men’s game.

However, to reduce a tournament designed to meet such noble purposes as just an opening act to the men’s playoffs is beyond comprehension and defeats the larger vision of serving the women’s game. There is nothing that women’s cricket has not done to deserve a new window for an independent tournament, let alone a proper window for playing matches.

From the author’s lens…

While all have been using the term “Women’s IPL”, for the tournament scheduled for women, the bigger question that needs an answer is: Whether it really is an IPL? The reality is that the Women’s IPL is just a misnomer being used interchangeably for convenience. The tournament, to be played amongst three teams for a total of four matches, is only an event. Women’s IPL? Certainly not. For a fact, the nearest the game of cricket has reached to a women’s IPL is the WBBL, with which the T20 Challenge is on a clash with.

To term the T20 Challenge as Women’s IPL, even after knowing the definition of IPL for 12 years, is grossly erroneous. The story will be much sadder if it is the current version of the tournament that the authorities envision as Women’s IPL. And I’m afraid, if that’s the case. Or else why would instead of increasing the number of matches from four and the teams from three, the board stuck to the template of last year?

There is no reason why women should not be given the glitz and opportunity equal to their male counterparts. It is rather high time and we are running at least half a decade late by all accounts. An IPL for women should have existed at least 5-6 years ago, and it is disheartening that it is still just an idea taking shape.

It is a disgrace that we feel content by giving stuff worth scrapings of men’s games to women. The control and regulation of women’s game lie in the hands of men, and it is only for the greater good that they guard it with honesty.