The likes of Beth Mooney, Jess Jonassen and Delissa Kimmince are unavailable for this match.

The 1st match of the Women’s National Cricket League (WNCL) 2019/20 will be played between Queensland Fire and Western Australia Women at the Souths District Cricket Club in Brisbane, Queensland.

The 2019/20 edition of the Women’s National Cricket League (WNCL) will kick start on Saturday when the last year runners-up Queensland Fire host the Western Australia Women. The team led by Kirby Short won only one of their first three matches but a hat-trick of wins put them in the final. The Queensland team ended up losing the final as NSW Women won the title for the 20th time in 23 seasons.

This edition, Queensland will have Georgia Redmayne at the top of the order who scored three fifties in six matches last year. On the other hand, Western Australia Women were the 2017/18 edition runners-up. They won five out of seven matches that season with both defeats coming against NSW Women only. During the previous edition, they lost three straight wins to miss out on a spot in the final.

The Souths District Cricket Club is expected to be clear for the most part on Saturday. However, the weather forecast suggests the chances of rain in the morning. It could cause a delayed start but no further interruption during the match.

The Souths District Cricket Club hasn’t hosted a WNCL game over the last two editions. Generally, the tracks at the venues in Queensland are good enough for totals of 225 in Women’s matches. The hosts have enough depth to chase down such scores.

Georgia Redmayne amassed 488 runs in 12 innings across last two WNCL at an average of 40.67 with four fifties. Nicole Bolton played only two matches during the previous edition but had an average of 56.2 in 2017/18. During the last edition game against SA Scorpions, the all-rounder Grace Harris scored 114-ball 162 and followed it with a 5-wicket haul.

She is capable of such performances but is quite inconsistent. Alongside picking up wickets regularly, Jemma Barsby also averaged 35 with the bat in the previous WNCL. Emma King finished with 12 wickets at an average of 18.16 and a strike rate of 27.5 during the 2018/19 edition.

The tournament is a crucial one for Georgia Redmayne to break into the Australian team while Nicole Bolton eyes for returning to the national side after recovering from injury. 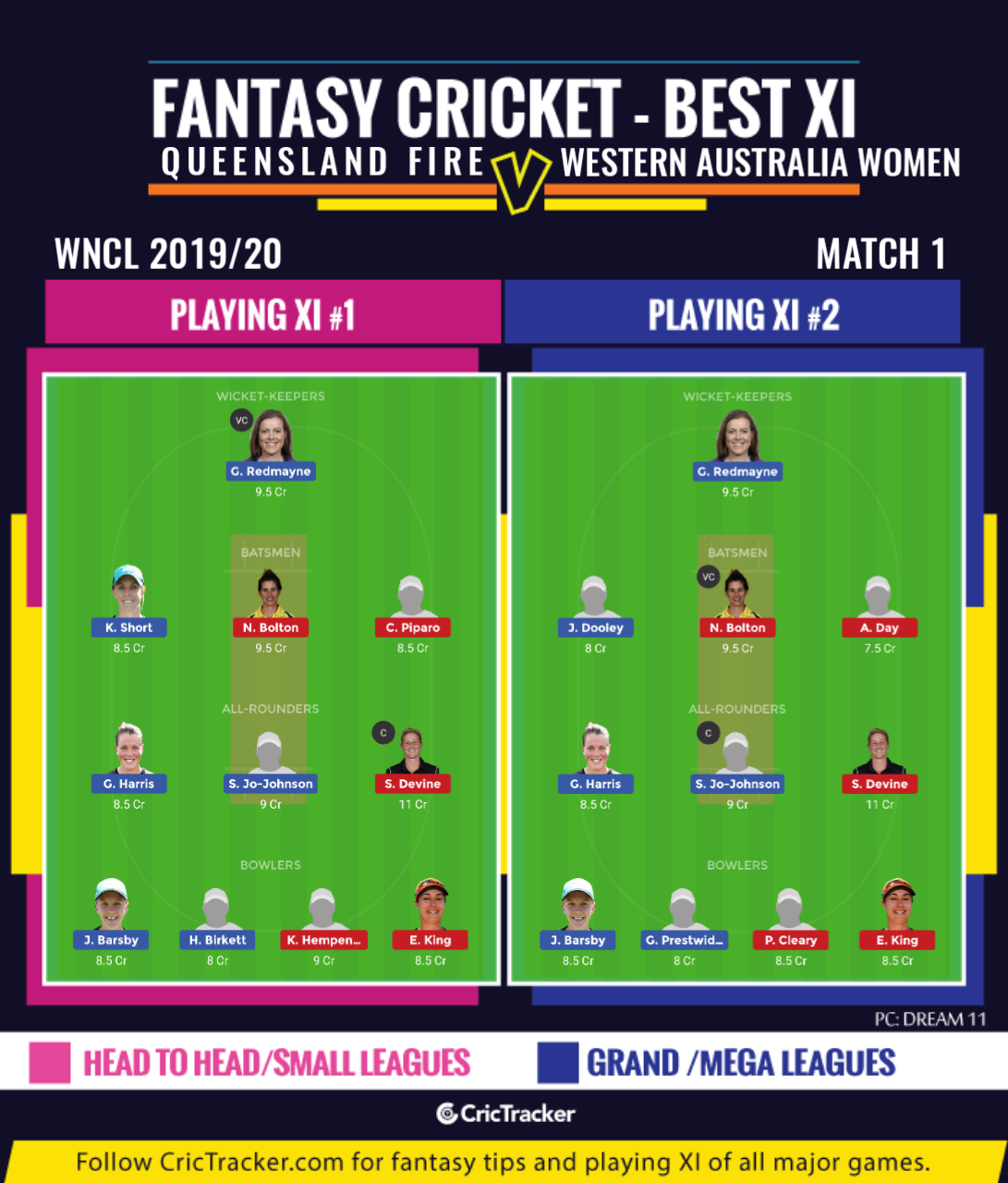 The challenge in this fantasy will be picking the players from batters category. There are a lot of players not available for this game in this category and a few more who are quite new to the WNCL. Hence, the trio of Kirby Short, Nicole Bolton and Chloe Piparo will be safe picks in this.