Both the sides might make a few changes to their line-up for this match as it is a dead rubber.

The 27th match of the Women’s National Cricket League (WNCL) 2019-20 will be played between Australia Capital Territory (ACT) Women and Tasmania Women at the Phillip Oval in Canberra.

This is a dead rubber for both the sides, ACT Women and Tasmania Women, as they have already knocked out of the tournament. The ACT Women have managed to win three matches in seven outings and are at the fifth position with 12 points to their name. However, they are coming off a morale-boosting win over Western Australia Women against whom they chased down 241 with two wickets in hand.

Tasmania Women, on the other hand, went down to New South Wales Women in a thrilling game defending 200 runs. They picked nine wickets of the opposition but couldn’t stop them from winning the match and would love to end the season with a consolation victory. With nothing to lose, both the teams will look to play freely and another last-over thriller is on the cards.

With the rain coming down in most parts of Australia, the forecast is for a cloudy day in Canberra on Thursday. Though the rain is unlikely to play spoilsport in this match with only 7% chances of showers predicted by AccuWeather. The temperature will hover around 21-23 Degrees Celsius during the match.

This is only the second 50-over game at the venue with the previous played only a couple of days ago between ACT Women and Western Australia Women. In that game, 240 almost turned out to be a par score which suggests that the pitch is a decent one to bat on and the team winning is expected to bat first. Though with overcast conditions on offer, bowling first is also a good option.

Average first innings score: 240 (only game played at the venue this season)

Meg Phillips continues to be a top pick in your Dream11 Fantasy team thanks to her all-round prowess. Though she couldn’t do much in the previous game, Phillips has 137 runs to her name in seven innings and has picked nine wickets. Sasha Moloney enjoyed a good outing against NSW Women scoring 59 runs and then scalped two wickets with the ball. Apart from her Wakarewa (8 wickets) and Maisy Gibson (9 wickets) should be your key players.

For the ACT Women, Katie Mack is a crucial player as she has scored 284 runs in seven innings and would want to finish the season on a high. Sarah Coyte picked three wickets in the previous game while Claire Koski also bowled an economical spell picking up a wicket in her four overs (1/7). These players should be picked in your Dream11 Fantasy team. 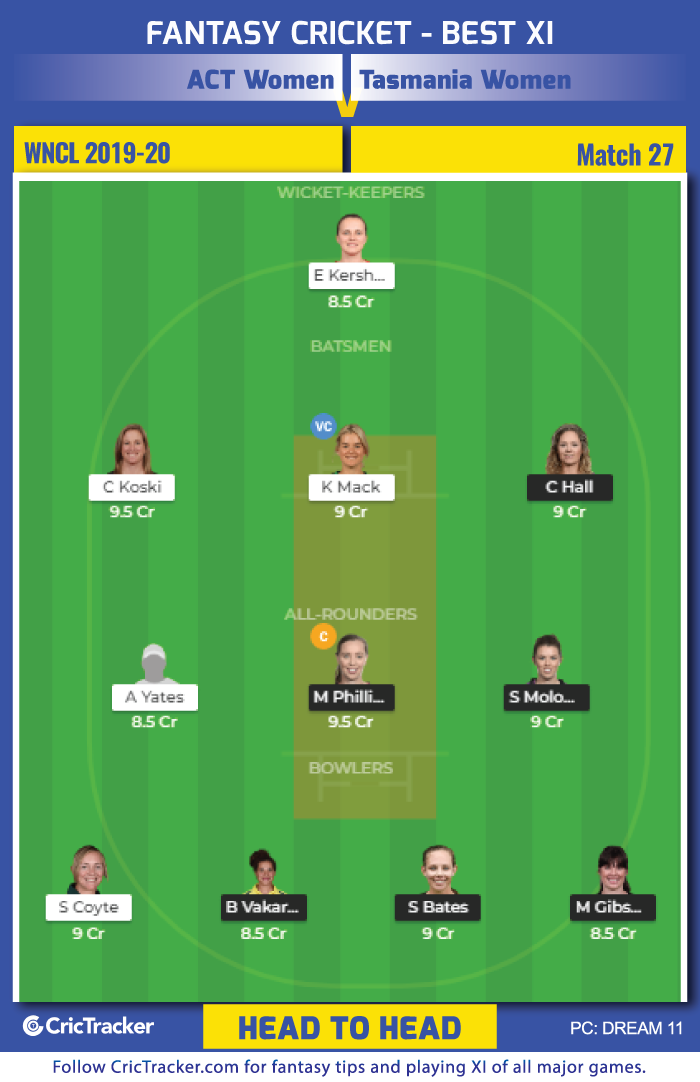 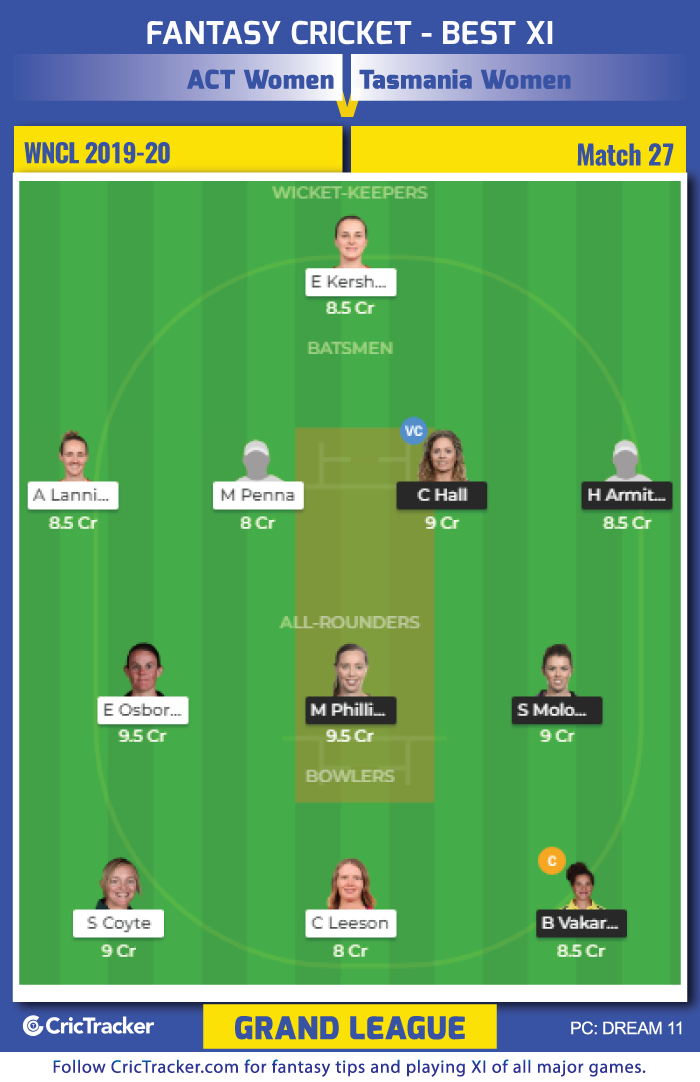 Both the sides might make a few changes to their line-up for this match as it is a dead rubber. Wait for the playing XIs to be announced before finalising your Dream11 Fantasy team.

Erin Osborne didn’t play the previous game and if she plays this encounter, can be picked in your team.

Tasmania Women are expected to win this match.