Annabel Sutherland bats up the order and also bowls a good number of overs for Victoria Women.

The 7th match of the Women’s National Cricket League (WNCL) 2019/20 will be played between New South Wales (NSW) Women and Victoria Women at the Park 25 No.2 in Adelaide.

Despite the absence of the big names, the New South Wales Women began the WNCL 2019-20 with a comfortable win. Their game against South Australia Women was reduced to 37 overs apiece. NSW Women kept down the hosts to 195/8 even after a century opening stand. Wicket-keeper Tahlia Wilson made the difference between the two sides as she scored an unbeaten 95.

The defending champions will now take on the Victoria Women in the last games of the first set of matches. The Victoria Women will come into the game on the back of an 18-run loss against the Australian Cricket Territory Women. The ACT Meteors posted 168/6 in the restricted 33 overs. Victoria had an opening stand of 88 runs but couldn’t capitalize as they finished with only 150/4.

Clear weather is expected in Adelaide on Tuesday for the last set of matches in the round one of the WNCL 2019-20. There could be periodic clouds but might not see any rain.

About 370 runs were aggregate here during the match played on Sunday across 66 overs. Scores of 230 were expected at this venue in a full 50 overs match. We could see successful chases up to 210 runs here.

Elyse Villani made decent start scoring 41 against ACT. She amassed 475 runs at an average of 52.78 with two tons and two fifties across nine games in the last two seasons. The Victoria skipper Molly Strano averaged 48 with the bat and took five wickets during the 2018/19 edition. She picked up a wicket and got out scoring seven runs in the first match trying to up the rate.

Alana King had a tough first game going wicketless and later bagging a duck. She has picked up 10 wickets each in the previous two WNCL editions and can be trustable. Her opposition number Lisa Griffith could be seen opening the innings like in the previous season. Amanda Wellington claimed 19 wickets over the previous two seasons and also scored a hundred in 2017/18.

Annabel Sutherland bats up the order and also bowls a good number of overs for Victoria Women. 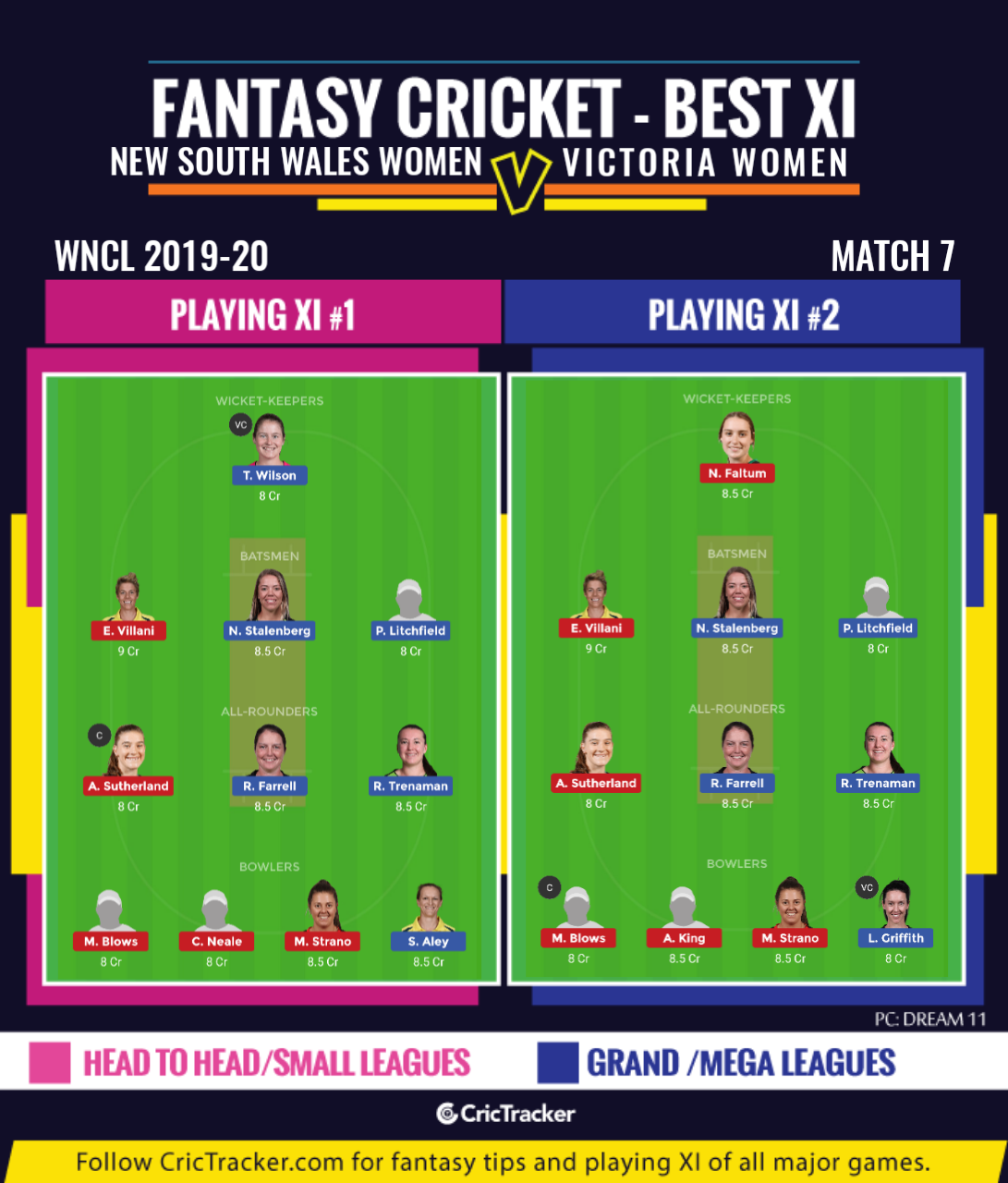 It seems as if Naomi Stalenberg, Elyse Villani and Phoebe Litchfield are the only available options among batters category. There are few others in this category who played on Sunday but none of them had prior experience. Moreover, none of them even got a chance to bat in those two matches.

Victoria Women are expected to bounce back with a win.