The Final of the 2019 Women’s Big Bash League (WBBL) will be played between Adelaide Strikers Women and Brisbane Heat at the Allan Border Field in Brisbane.

After a long battle of one and a half month between eight teams, WBBL 2019 has got its two finalists i-e. Adelaide Strikers and Brisbane Heat, who will lock horns in the final. It will be interesting to watch if Heat can successfully defend their title or fans will get to see a new champion.

For Adelaide Strikers, Sophie Devine is in red hot form, who has given some fascinating performances with the bat and ball in the ongoing tournament. She has amassed 764 runs and grabbed 18 wickets in her 12 outings. She is expected to replicate her form in the finals. Meanwhile, Bridget Patterson and Suzie Bates have also contributed well with the bat. In bowling, Sarah Coyte has also performed tremendously well for her side and has taken 18 wickets so far.

Brisbane Heat are the defending champions and also ended as the table-toppers in the league stage. As a bowling unit with the likes of Jess Jonassen, Sammy-Jo Johnson and Delissa Kimmince they have given some commendable performances. Also, their batters have supported their bowlers by putting some good show with the bat so far. They have nothing much to tinker and are expected to be the favourites to win the WBBL 2019 final.

There are slight chances of rain but it will not affect the length of the match. However, the temperature is expected to range between 30 and 32 Degree Celsius according to the Accuweather.

The track at Allan Border Field is expected to go in favour of batsmen with fast bowlers getting some help in the early phase of the game. However, the team winning the toss is expected to field because the teams have found it easy to chase at this venue. In seven games played so far, the team chasing has won six games with one match being won by the defending side.

Sophie Devine will be an important player in the final for any Dream11 Fantasy side because she has given some fascinating performances with the bat. She is currently the leading scorer in the tournament and has grabbed 18 wickets.

Beth Mooney will be another player to watch out in the WBBL 2019 final. She is the leading scorer of her side in the ongoing tournament. 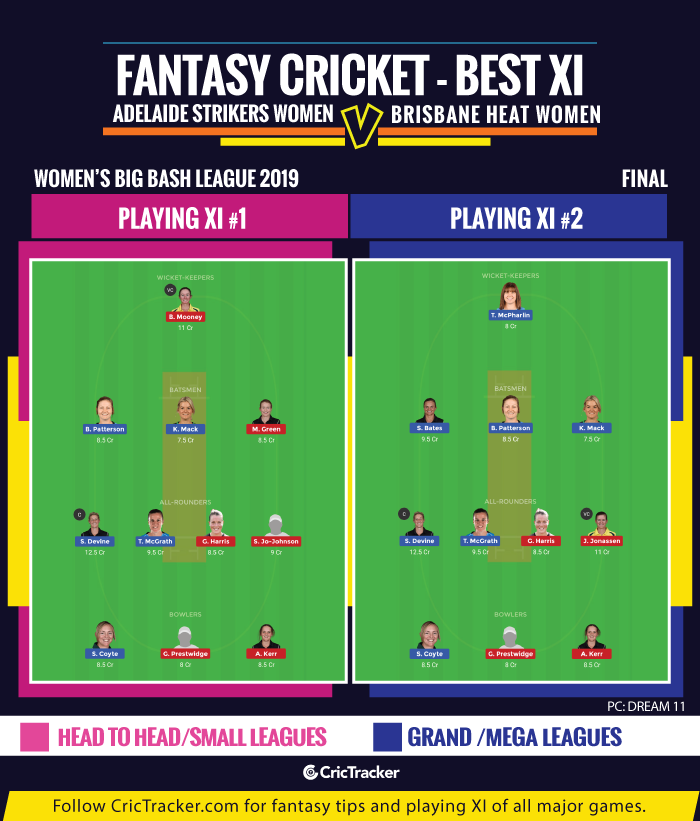 Sammy-Jo Johnson looked quite unsettled with the ball in her previous couple of games. She is a brilliant bowler but has struggled a bit as far as her recent performances are concerned. She will be a risky player to pick but will be worth for any Grand League side.

Mooney, Bates, Devine and Jonassen can’t be picked in one team due to credits issue. Devine and Mooney have been the most consistent players which is why we have picked the duo in the first team.

Brisbane Heat is expected to win the WBBL 2019.