Elyse Villani is quite consistent when it comes to T20 format and hence will be the perfect choice as vice-captain.

The 3rd match of the 2019 Women’s Big Bash League (WBBL) will be played between Melbourne Stars and Hobart Hurricanes at the Junction Oval in Melbourne.

Melbourne Stars and Hobart Hurricanes will clash off in their respective first game of WBBL 2019 on Saturday. Elyse Villani switched to Melbourne Stars from Perth Scorchers and get the chance of leading the team. The presence of the overseas stars inform of Lizelle Lee, Katey Martin and Mignon du Preez will help the Stars to maintain consistency throughout the season which went missing from them during the last edition.

On the other hand, the Hobart Hurricanes are will the worst record in the WBBL history. Their fortunes couldn’t turn despite the presence of Heather Knight and Smriti Mandhana at the top last. This time, they miss the services of Mandhana but the in-form England batter Fran Wilson will join Hurricanes. The big-hitting Chloe Tryon is also part of the Hobart franchise for the 2019 edition.

Most part of Saturday is expected to be under clouds at the Junction Oval. Showers are predicted in the weather forecast around 4 PM local team which will be around the innings break.

The Junction Oval can be said as a chasing venue in the WBBL. During the previous edition, the teams chasing a target won four out of six instances including a successful chase of the 166-run target. There will be a hint of spin at this venue during the second innings.

Annabel Sutherland succeeded whenever she batted up the order. She earns big points as she gets to bowl her full quota more often than not. Fran Wilson was as consistent with the bat as any other batter during the KSL while Mignon du Preez put on some inspired batting performances. Heather Knight was successful with both bat and ball in the same competition. Chloe Tryon is well known for her big-hitting and could chip in with a couple of wickets regularly.

Elyse Villani is quite consistent when it comes to T20 format and hence will be the perfect choice as vice-captain. 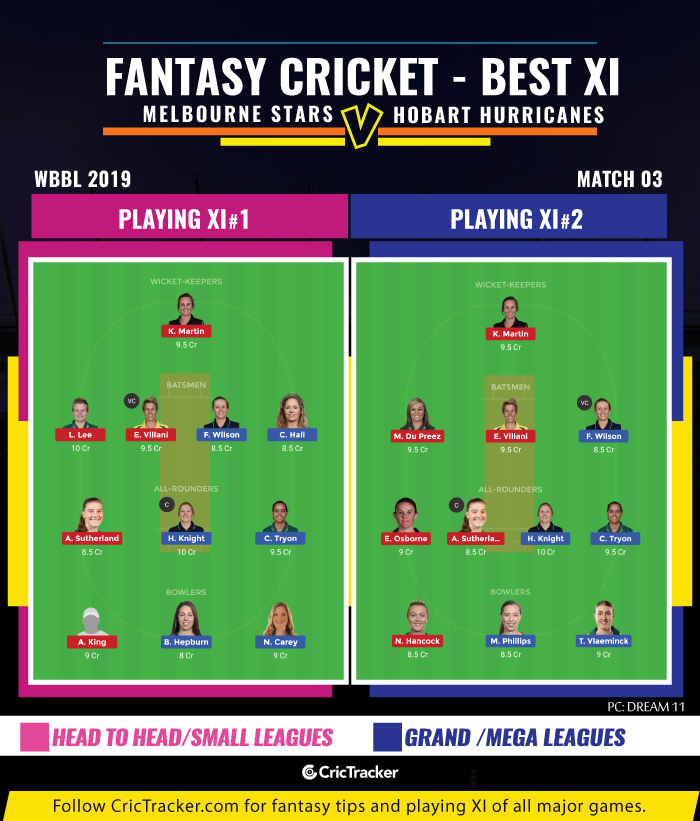 With Georgia Redmayne’s exit, the Hurricanes are bulked with all-rounders but missed a keeper. This leaves only one place for Stef Daffara, Erin Fazackerley and Emily Smith. Hence, we have not picked any of them in our Suggested XIs.

The Hobart Hurricanes could get better of the Melbourne Stars on Saturday.