Beth Mooney will be a safe option as a multiplier due to her tournament form.

The 32nd match of the 2019 Women’s Big Bash League (WBBL) will be played between Melbourne Stars and Brisbane Heat at the Junction Oval in Melbourne.

The game can be viewed on the Fan Code app in India.

The Brisbane Heat started the season with three defeats in first five matches but have bounced back strongly with consecutive wins. In their previous match, the defending champions have got better of the last year finalists Sydney Sixers. It was the second time in this season that the Brisbane Heat has claimed full two points against the Sydney Sixers.

With a chance of topping the points table, the Brisbane team now faces the Melbourne Stars on Wednesday. The Stars are well placed at the bottom of the table having won only one of the seven matches they played. Even their only win this season came when Lizzle Lee scored an unbeaten ton. The Stars lost the previous game by 17 runs to Adelaide Strikers.

The Junction Oval is expected to witness sunny conditions on Wednesday. No rain is predicted for the next two days at this venue.

The Junction Oval is more of a venue where the chasing teams perform the best as four of the five matches this season have been won by the teams batting second. There will be little help in the first innings for the bowlers which could see the batters posting less score.

Beth Mooney scored four fifties in this WBBL and about 60% of individual fifties by Brisbane Heat players in all WBBL. Jessica Jonassen hasn’t been consistent in the tournament but has had big performances with both bat and ball. Lizelle Lee has been quite consistent as she scored at least 25 runs in six out of seven matches. In last four matches, she scored two fifties and an unbeaten century.

Beth Mooney will be a safe option as a multiplier due to her tournament form. 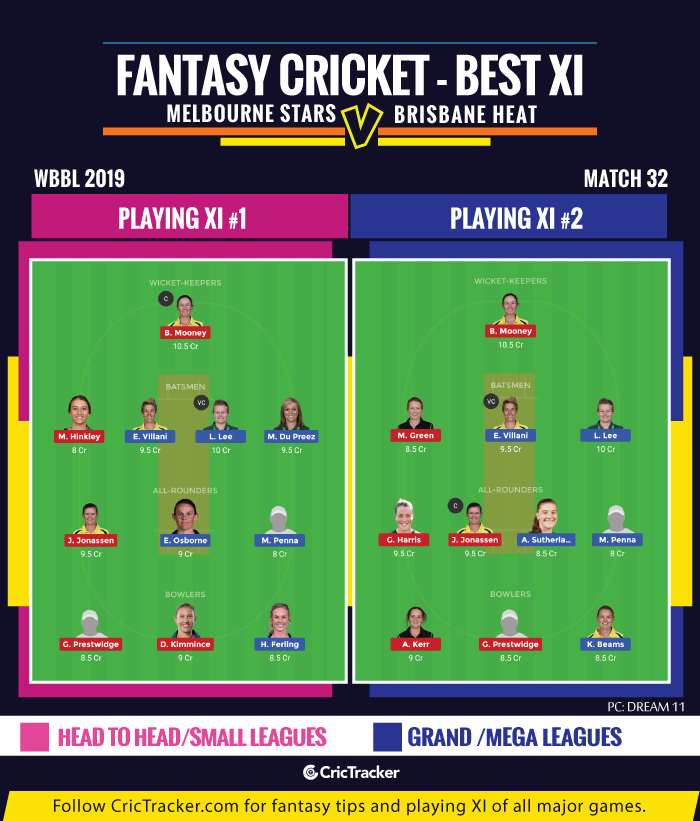 The Melbourne Stars usually send Annabel Sutherland in top-order. However, the plan seems to have changed since her comeback as she batted low down the order. This meant Mignon du Preez could come up more often and is going to be crucial in the fantasy team.

The Brisbane Heat are expected to register their 3rd straight win.