Sophie Devine has contributed equally well in both departments. Even if she fails in one, her all-round prowess should earn fantasy users some points in the other department in the Dream11 Fantasy contest.

The 40th Match of the Women’s Big Bash League 2019 between Sydney Thunder and Adelaide Strikers will be hosted by the North Dalton Oval, Wollongong

Match 40 of WBBL 2019 features Adelaide Strikers and the struggling, Sydney Thunder in Wollongong. Both teams started the campaign well although they are separated by recent form. Thunder comes into this game on the back of consecutive losses with time running out for them. On the other hand, Adelaide Strikers has won six games with 12 points to show for their efforts.

The Strikers are favourites on paper with Sophie Devine in red hot form this season. With the likes of Rachael Haynes and Rachael Priest in their ranks, Sydney Thunder shouldn’t be taken lightly and should prove to be a tough test for Bates and co.

Another bright and clear day awaits in WBBL 2019 with the weather in Wollongong being perfect for a game of cricket. A cloud cover of 28% is expected and will decrease as the game goes on with the temperature hovering around 20 degrees Celsius.

Not much is known about the pitch here in Wollongong although teams should prefer chasing with the conditions getting better as the game goes on. Extra bounce for the bowlers to exploit has been available in almost all the WBBL venues so far and should be no different for this game as well. The pacers should be able to get some swing upfront with either side eying a score of 150 if they were to bat first in this crucial game.

Sophie Devine is the best allrounder this season with 412 runs and 13 wickets so far. She has scored five fifties in just nine games and has also been the go-to bowler for the Strikers. Her opening partner, Suzie Bates has shown glimpses of what she is capable of. While she can bowl a few overs if needed, her batting prowess should come up trumps on Wednesday.

Rachael Priest is another such individual who is due for a big score. She has only 186 runs to her name although her strike rate of 125.68 stands out. These players should be picked in your Dream11 Fantasy team. 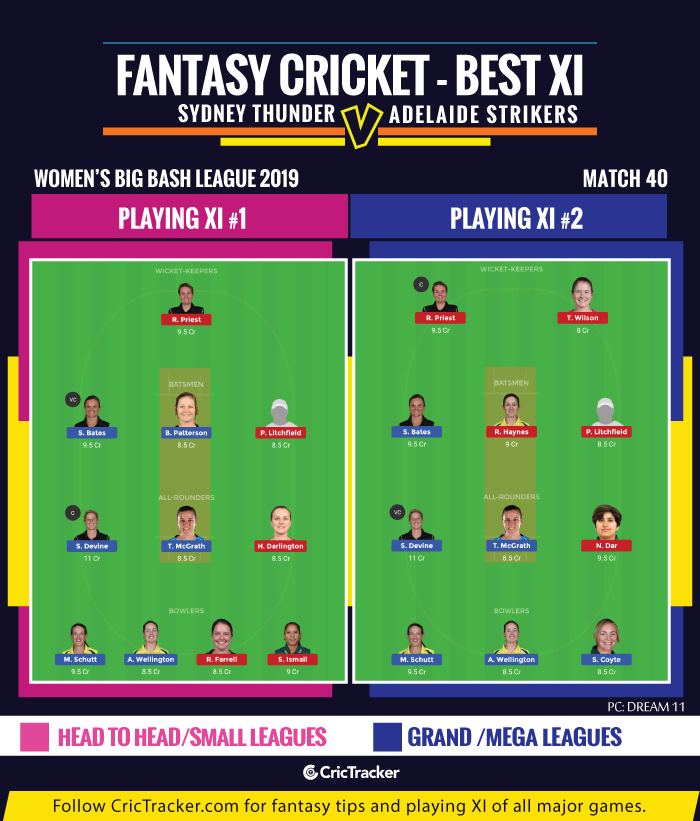 Sophie Devine has contributed equally well in both departments. Even if she fails in one, her all-round prowess should earn fantasy users some points in the other department in the Dream11 Fantasy contest.

Tegan McPharlin is not expected to bat for the Strikers and even if she does, it will be with the tail. She should be avoided with two Sydney Thunder keeping options available for this contest.