The 50th match of the 2019 Women’s Big Bash League (WBBL) will be played between Melbourne Renegades and Melbourne Stars at the Junction Oval in Melbourne.

Melbourne Stars and Melbourne Renegades face off against one another in the second derby in a week on Saturday. The first game between the two sides saw Lizelle Lee and Erin Osborne star for the Stars. In spite of the win in Ballarat, Melbourne Stars are already out of the contention for the knockout spots.

On the other hand, Melbourne Renegades find themselves in fifth place with twelve points. Although they have been inconsistent this season, they are firmly in the running for a place in the top four. The Renegades will enter this game as the clear favourites with the likes of Danielle Wyatt and Jess Duffin chasing down 183 against a decent Brisbane Heat bowling unit. But with Lizelle Lee in fine form, one can expect an even contest between the two Melbourne franchises.

A sunny day beckons with the temperature hovering around 16 degrees Celsius. While there isn’t a chance of rainfall, the conditions should remain the same throughout the game. There is a wind expected to blow in at 18 km/h.

Traditionally, it is a good wicket to bat on with some help available for the pacers. Chasing will be the preferred choice with 145 being the average first innings score. Extra bounce will help the pacers upfront which could be detrimental to the outcome of the game.

Madeline Penna of Melbourne Stars has been ruled out of the weekend games. Emma Inglis and Lucy Cripps have been included in the 14-player squad.

Danielle Wyatt starred in a superb run-chase against Brisbane Heat as she plundered 87 runs off just 55 balls. With the English International filling in as the fifth bowler as well, she guarantees fantasy points in the contest. One of the fastest bowlers in the competition, Lea Tahuhu is also a worth-while option. She has picked only nine wickets in 12 games but her economy of 6.13 stands out amongst her peers.

Lizelle Lee and Mignon du Preez have justified their inclusions as overseas players with consistent performances for the Stars. While Lee has 389 runs at a strike rate of 128.38, Mignon du Preez has scored three fifties so far. Although her latest fifty against Sydney Thunder did go in vain, her form bodes well for the Melbourne Stars. 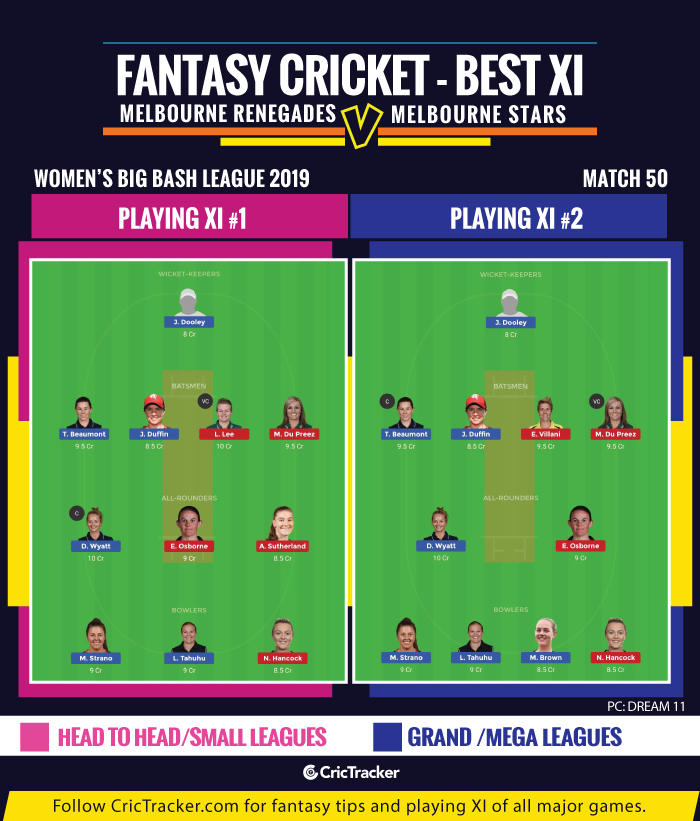 Melbourne Renegades is expected to win this encounter