Melbourne Renegades are ranked 5th with 12 points in the on-going tournament.

It will be a crucial game for both Melbourne Renegades and Sydney Thunder if they want to stay in contention to qualify for the semi-final of WBBL 2019.

Renegades are ranked 5th with 12 points in the on-going tournament. For Renegades, Danielle Wyatt has given some commendable performances with the bat. She has amassed 418 runs in 12 games at a brilliant strike rate of 130.02. She would look to replicate her form in the upcoming game against Thunders. In bowling, they have Molly Strano, who has bagged as many as 15 wickets in 12 matches. Moreover, Maitlan Brown and Jess Duffin have also given some decent performances in their respective departments.

For Thunders, who are just below, Renegades with 11 points are short of a team effort. Their players have given performances but in pieces. So, they would be eager to come up with some more effort in the upcoming game. With the likes of Rachel Priest, Alex Blackwell and Rachael Haynes, they boast strong batting line up, who are capable to outclass any bowling line up on their best days.

The weather on the matchday is expected to be cool with few chances of rain that could intervene in the clash between Renegades and Thunder. However, the temperature is expected to hover between 12 and 14 Degree celsius during the game time according to Accuweather.

The track will favour batters of both sides at the Junction Oval. However, the spinners will play an important role as the match progresses. But, the team winning the toss are likely to bowl first as per the trends. The teams have found it easy to chase at this venue.

Danielle Wyatt is playing in red hot form with the bat. She has amassed 418 runs in her 12 outings. She will be an important player for any Dream11 Fantasy side. Hannah Darlington has done a commendable job with the ball in the ongoing tournament. She has grabbed as many as 14 wickets in 12 matches for her side and will be an important player to watch in the encounter. 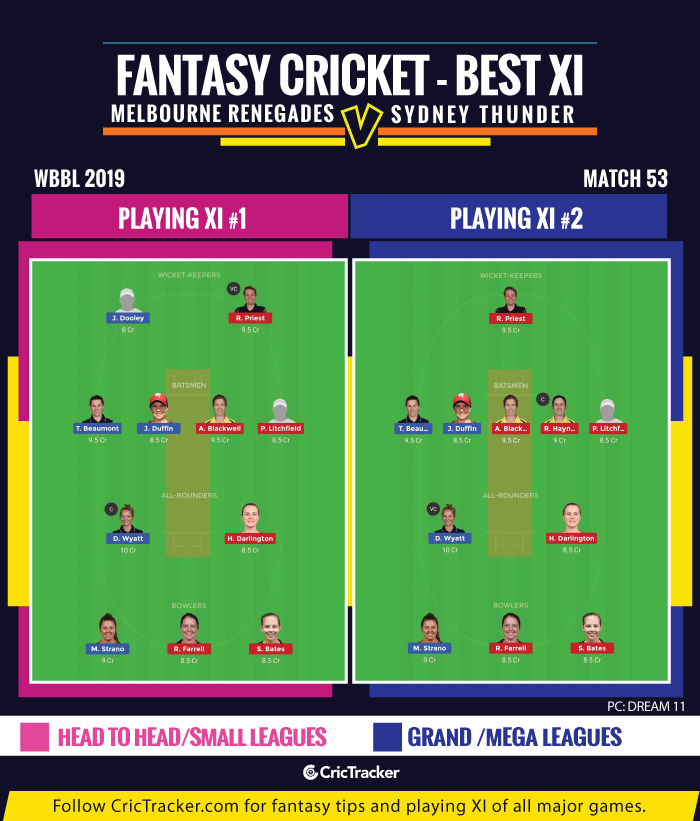 Tammy Beaumont is still due to play a good knock in WBBL 2019 and hasn’t scored a single fifty as yet in the tournament. As per her current form, she will be a risky player to pick in the match against Thunder but will be worth for any Grand League side.

Sydney Thunder is expected to win the match against Melbourne Renegades.