Nida Dar, Grace Harris, Sammy-Jo Johnson and Jess Jonassen all four all-rounders should be picked in your Dream11 Fantasy team.

The 7th match of Women’s Big Bash League 2019 will be played between Sydney Thunder and Brisbane Heat at North Sydney Oval in Sydney.

Both the teams are coming into this game after facing the Sydney Sixers but with contrasting results. Sydney Thunder suffered a 49-run loss at the hands of Ellyse Perry‘s team while the defending champions, Heat thumped the Sixers by 92 runs. This also turned out to be the second consecutive win for the Brisbane franchise over the Sydney Sixers having beaten them in the final last year.

Brisbane Heat though will take the field within 16 hours after their win in the first game. Thunder, on the other hand, will come after resting for a day. The Rachel Haynes-led side should pull up their socks and perform admirably well to go past the strong Heat outfit. Brisbane Heat are the clear favourites to win the game.

There is no chance of rain in Sydney on Sunday. It will be bright and sunny with the temperatures hovering around 19-20 Degrees Celsius according to AccuWeather.

The team batting first has had the advantage in the two matches played so far at the venue this season. The bowl turns quite a bit later in the match as well. Amelia Kerr ran through the Sixers’ lower-middle order on her own which suggests it won’t be an easy pitch to chase down the total.

Beth Mooney scored a brilliant half-century to get her WBBL season going. Sammy-Jo Johnson, Jonassen and Grace Harris all three all-rounders are exceptional players. Hence, they should be picked in your Dream11 Fantasy team. Amelia Kerr can pick wickets in a heap and don’t miss her at any cost.

For the Thunder, Blackwell scored a fighting half-century in the previous match while Haynes and Litchfield are also crucial. Shabnim Ismail and Bates bowl in the death overs and can earn some crucial Dream11 Fantasy points. 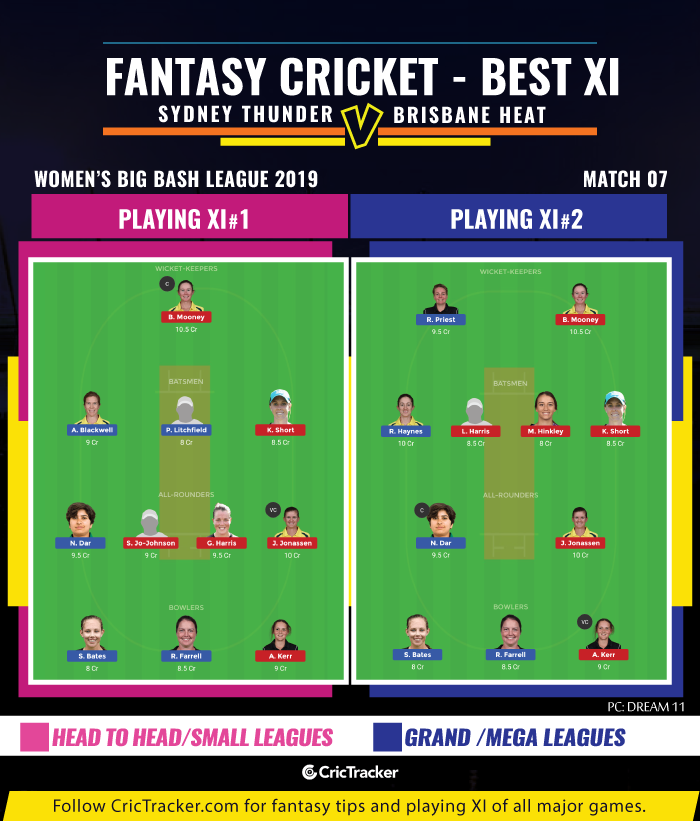 Nida Dar, Grace Harris, Sammy-Jo Johnson and Jess Jonassen all four all-rounders should be picked in your Dream11 Fantasy team. Then only one of Blackwell or Haynes could be picked. Blackwell is a better T20 player and s available at lesser credits than her skipper as well.

Don’t go by Laura Harris’ performance in the previous match. She came to bat too low and might not get to bat if the Heat bowl first.

Brisbane Heat should be able to win this match.