The Final of the 2019 Women’s Champions League Twenty20 Cricket Tournament will be played between Chitwan Rhinos Women and Kat Queens Kathmandu at the Tribhuvan University International Cricket Ground in Kirtipur.

The Women’s Champions League T20 will conclude on Thursday with Chitwan Rhinos Women facing Kat Queens Kathmandu in the final. Interestingly, both the teams faced off in the tournament opener and have been on a 4-match winning streak since then. The Chitwan team won that game after bundling out Kat Queens to 95. Interestingly, it was the only game where Rubina Chhetri was dismissed in the tournament.

The Chitwan Women won their remaining three matches as well to top the points table and qualify for the final directly. Rubina played key role in Kathmandu team’s success as she remained unbeaten in the next three league matches to help them finish in top three. Her unbeaten 34 and 4-wicket haul in the Eliminator helped Kat Queen defeat the Biratnagar Titans Women.

The skies over the University Ground in Kirtipur are expected to be filled with clouds during the final. However, no rain is predicted in the weather forecast at least till evening.

Most of the matches that began at 11:30 AM local time have been amongst runs. The Eliminator was a low-scoring one due to Kathmandu’s dominance with the ball. With a fresh pitch to be used for the final, we could see targets of 130+ getting chased.

The players with International experience are expected to come good in this fixture. Kajal Shrestha and Indu Barma of Chitwan Rhinos Women have represented Nepal in the T20I format. The Kat Queens Kathmandu has as many as three International players in form of Rubina Chhetri, Apsari Begam and Roma Thapa. 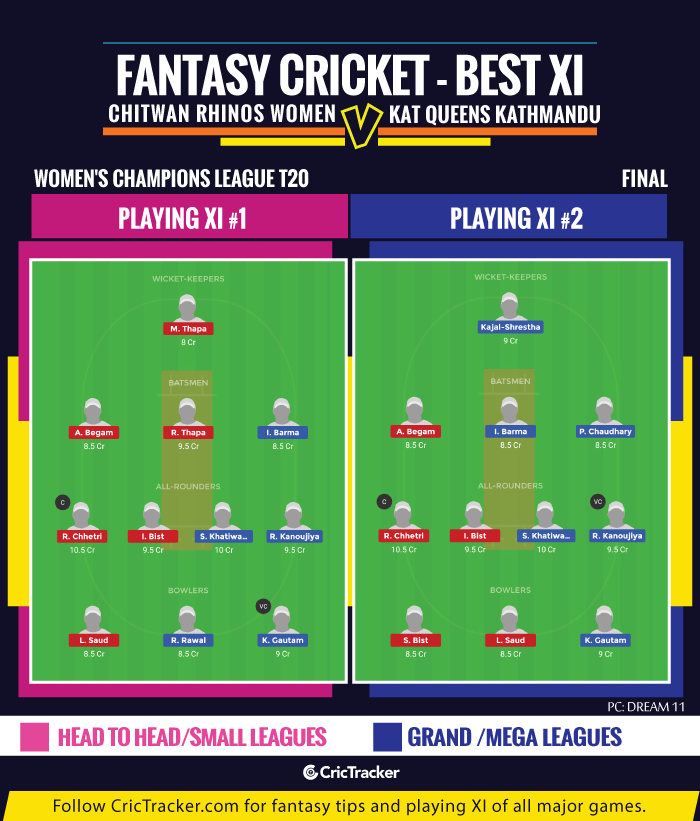 Rubina Chhetri, Ishwori Bist, Suman Khatiwada and Ritu Kanoujiya should be picked at any cost from the all-rounders’ category. Though the four players are expensive, they are capable of being the top performers in the match.

Chitwan Rhinos Women could be seen working hard for a win against Kat Queens Kathmandu.