The 5th match of the 2019 Women’s Champions League Twenty20 Cricket Tournament will be played between Chitwan Rhinos Women and Lalitpur Falcons Women at the Tribhuvan University International Cricket Ground in Kirtipur.

Chitwan Rhinos Women made a good start to the tournament as they defeated Kat Queens Kathmandu in the tournament opener. The Rhinos chased down the target of 93 runs with nine balls to spare and five wickets in hand. In their 2nd match, the Chitwan team will face Lalitpur Falcons on Friday. The Lalitpur team finished with a decent total of 122/7 in their 20 overs. However, a quick-fire opening stand for the Biratnagar Titans ensured the chase became easy and was achieved with four overs to spare.

Though there won’t be any rain on Friday in Kirtipur, we might see clouds over the venue for the majority part of the day.

With the same pitch being used for both matches, the team chasing will find themselves in a tricky situation in afternoon matches. Even totals of 130 could be defended in the afternoon if bowled well. The first part of the first innings will be best for batting during the matches which start at 1:30 PM local time in this tournament.

Chitwan Rhinos Women – Ritu Kanoujiya has scored 61 runs and took 9 wickets from 12 matches across all formats for Nepal.

Lalitpur Falcons Women – Nary Thapa has scored 63 runs and took 19 wickets from only 11 T20I matches. 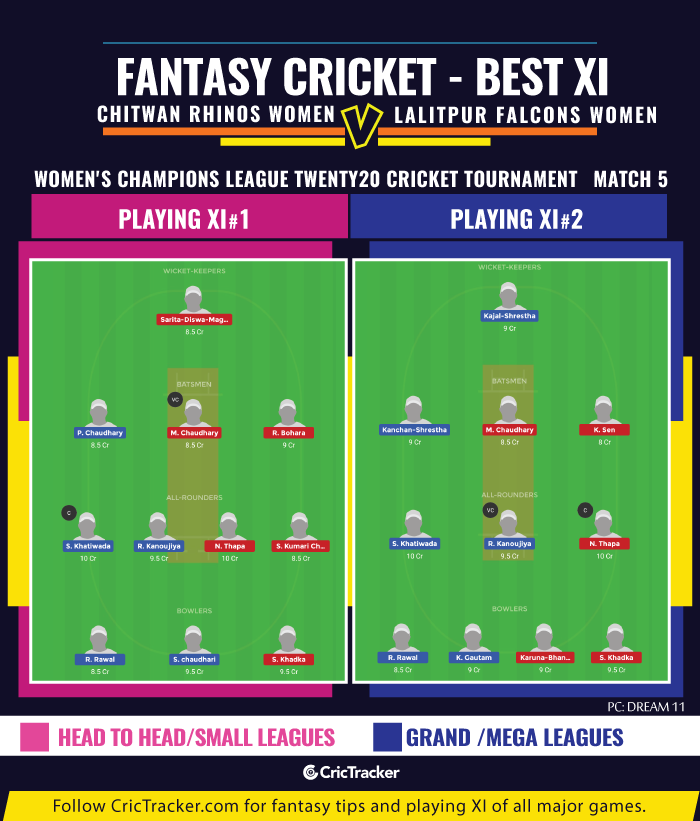 The following are the players who represented Nepal Women in T20Is and could be useful in the fantasy team:

Chitwan Rhinos Women are expected to defeat Lalitpur Falcons Women in this match.