Poonam Yadav has been ruled out of the tournament.

The 1st game of the Women’s Senior T20 Challenger Trophy 2019-20 will be played between India A Women and India B Women at the Barabati Stadium in Cuttack.

The Women’s Senior T20 Challenger Trophy will kick start on Saturday when India A Women takes on India B Women in Cuttack. The tournament will be a crucial one for the Indian Women’s team ahead of the Women’s T20 World Cup slated to begin in February. Skipper Harmanpreet Kaur will be leading India A that contains the big names in the form of Deepti Sharma and Radha Yadav. The T20 Vice-captain, Smriti Mandhana leads India B and will be seen in action along with her opening partner Jemimah Rodrigues.

The Barabati Stadium in Cuttack is yet to host a Women’s T20 and any Women’s game since the 2013 Women’s CWC. During that tournament, the teams batting first touched 230 more often at this venue, a total which is a must in Women’s ODIs in the present day. The recent ODI between India and West Indies was played on what was a flat track but showed signs of turn during the second half of the chase. Hence, we can expect a high scoring match on Saturday.

Poonam Yadav has been ruled out of the tournament due to an injury.

Vanitha V.R hasn’t made it big at the International cricket but has always been amongst runs even when she gets a chance against touring teams. In the recent T20 competition, she scored 214 runs at an average of 26.75 with help of a fifty. UP’s Meghna Singh finished among the top wicket-takers in the Senior Women’s T20 tournament picking up 13 wickets from 9 matches at an average of 9.38 only. Deepti Sharma has been in rich form this season in the T20 format. She should her finishing skills in the KSL and ran through the West Indies line-up during their tour last month.

Shikha Pandey is also in the form of her life, especially with the ball. Anuja Patil was dismissed only once in the 2019-20 Senior Women’s T20 where she amassed 154 runs across four innings with help of two fifties. She also took six wickets at an average of 16.66. Shivali Shinde of Maharashtra scored an unbeaten hundred in the T20 competition. She scored 277 runs across 11 matches. Punjab’s Jasia Akhtar scored 241 runs in that tournament across 7 innings at an average of 60.25. However, only one of Akhtar and Shinde could be in the final XI. 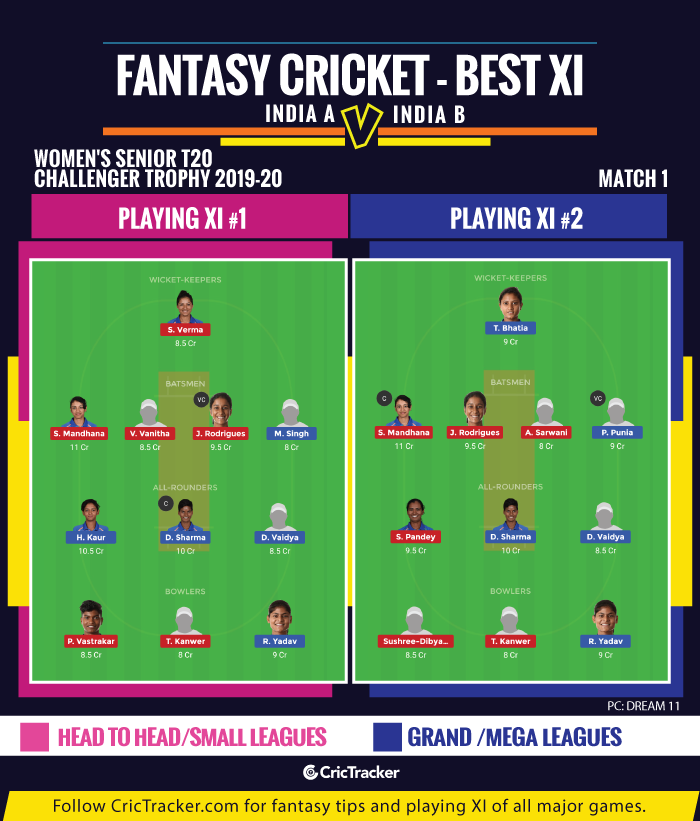 Since the tournament will be helpful to finalize India’s squad for the T20 World Cup, the players who are in the line are expected to get first preference in the selection. Our probable XIs and Suggested XIs are picked based on the same expectations.

India B looks more balanced than India A and hence they are likely to win this match.