It is advisable to have at least three all-rounders in your squad as they have been useful in such conditions.

The 7th match of the Cricket Ireland Women’s 50 over series will be played between the Typhoon Women and the Scorchers Women at Dublin, Ireland.

We have entered the fag end of the Women’s Super Series 2020 in Ireland with only two games remaining now. This will be an interesting fixture as it presents as a must-win game for Typhoon Women. They need to win the remaining two games to secure the series while even one loss will ensure a series loss.

Scorchers Women, on the other hand, will only need to focus on securing a win and even a washout will ensure a title win for them. They will need to keep their composure as they take on a determined Typhoon Women’s side.

The weather is conducive for a complete game of cricket. However, the temperatures will be low while ensuring the chances of precipitation at a minimum of less than 10%. The temperatures are expected to hover in the early teens.

The pitch at Dublin is expected to remain the same. There will be ample in the track for the batsmen while a hint of help for the pacers.

Average first innings score: 181 (Based on the only game played here in this series)

Gaby Lewis has been the batswoman in form. She has lodged up 247 runs from 5 innings and is playing at a phenomenal average of 49.40. She will be the key in Sunday’s game.

Laura Delany has had a decent series as well. She has amassed 165 runs from 6 innings to her credit and has been the best batter for her side. She has also managed to pick up 6 wickets at a brilliant economy of 3.5.

Celeste Raack has been the best bowler in the series. She has picked up 11 wickets from 6 innings at an average of 15.90 and a brilliant economy of 3.50.

Sophie MacMahon is another bowler to watch out for. She is only behind Raack in the wickets tally and has got 10 wickets to her credit. She has been bowling at a good economy of 4 RPO and at an average of 18.80. She also has 113 runs next to her name at a decent strike rate of 83 and an average of 22.60. 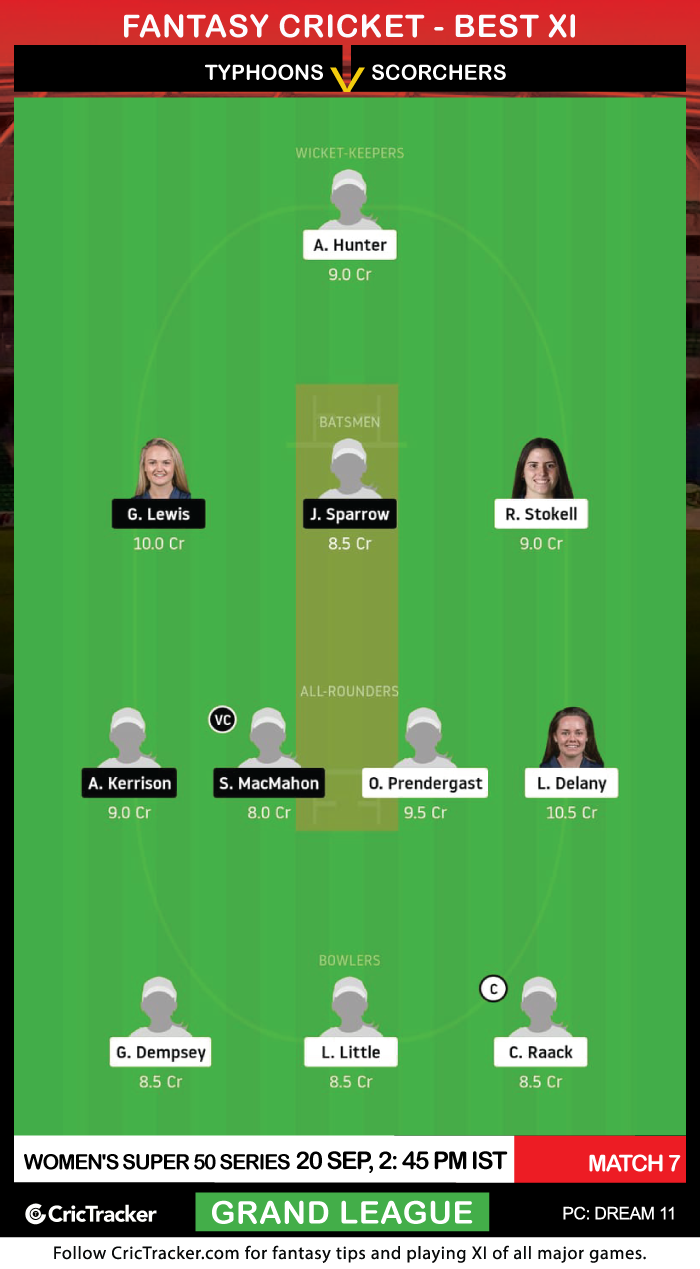 It is advisable to have at least three all-rounders in your squad as they have been useful in such conditions.

Typhoon Women are expected to win this one.