Jemimah Rodrigues is in form and she can be made the captain.

After three closely fought matches, Women’s T20 Challenge 2019 will witness its first final on May 11 which will be played between the Supernovas and Velocity. With the Velocity team losing by a margin fewer than 25 runs, the Trailblazers were knocked out of the tournament. So far, the matches have got more than decent response compared to the one-off game last year and from here on, the BCCI would look to build up on it as far as staging the Women’s IPL is concerned.

Supernovas won the previous game against the same team by 12 runs to top the points table with a better net run-rate. Jemimah Rodrigues was at her best and she lit up the Sawai Mansingh Stadium with some classical strokes. They will most likely go unchanged in this game. Velocity included Jahanara Alam for the previous game but the Bangladesh skipper couldn’t strike in her four-over spell and they might be tempted to bring in Sushree Pradhan instead.

The final of the Women’s T20 Challenge 2019 between Supernovas and Velocity will be hosted by the Sawai Mansingh Stadium in Jaipur.

There are chances of rain with thunderstorm under 7 PM in Jaipur on Saturday. However, the clouds are dramatically expected to clear by the time the match starts and there is no chance of the heavens opening up. The temperature is expected to hover around 32-34 degrees Celsius and there will be a little bit of dew in the evening.

The surface for the first three matches was on the slower side and it is expected to be the same for the title clash as well. The pitch has gone slower as the match has progressed and dew has not played a significant role. The team winning the toss is expected to bat first and put runs on the board in the big game.

Danielle Wyatt in T20s since 2018 in India while chasing: 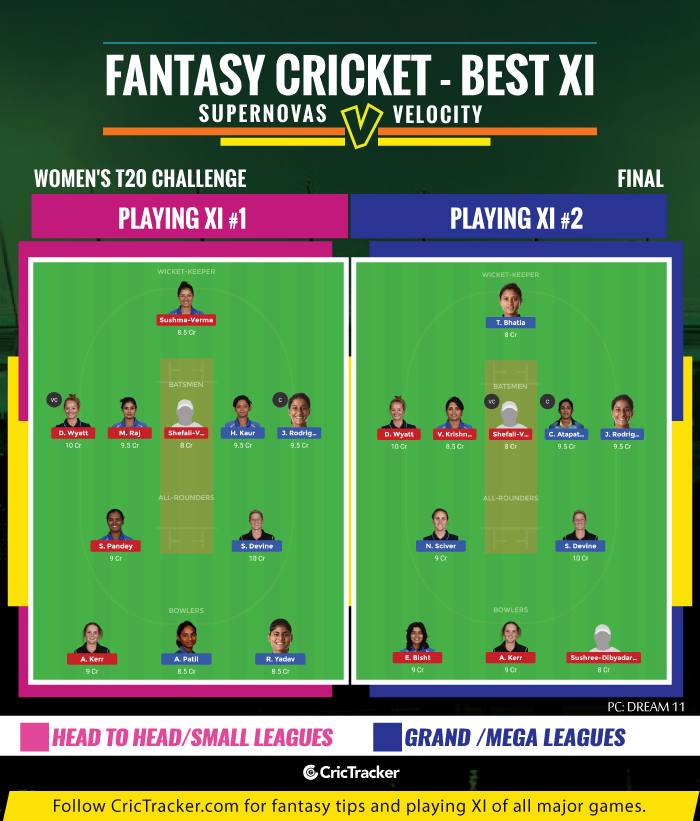 Chamari Athapaththu is too good a player to miss out and she could play a big knock in the final.

Supernovas are the favourites to win the game looking at the depth of their team.