There is a prediction of rain prior to the start of the all-important clash.

The Women’s T20 Challenge 2019 started on a pleasant note for the Trailblazers as a 67-ball 90 from Smriti Mandhana got them home against the Supernovas. However, Mandhana’s team had to face the wrath of elimination after yesterday’s match between the Supernovas and the Velocity at the Sawai Mansingh Stadium in Jaipur. Last night, the Harmanpreet Kaur-led Supernovas beat Mithali Raj & Co by 12 runs.

At the end of the league stage, all three teams were tied with two points each. Nevertheless, the Trailblazers had the worst NRR. The final is now scheduled to be played tomorrow between Supernovas and Velocity. Velocity’s batting is a tad on the weaker side and the result of the encounter is expected to boil down to how the likes of Mithali, Danielle Wyatt and others handle the Supernovas bowling.

The pitch in Jaipur is again anticipated to help the spinners and fast bowlers won’t have much in it for them. The likes of Wyatt, Mandhana and Jemimah Rodrigues have shown that run-making isn’t an arduous task on the strip. Another sporting track can be expected for tomorrow’s game.

The weather forecast isn’t something to cheer about as there are chances of rain from morning 9 AM to evening at 6 PM. Thereafter, there is a possibility that the heavens may calm down. Hence, a delayed start can be on the cards. The temperature will be between the 32 degrees Celsius and the 36 degrees Celsius during the course of the match. The humidity will be around the 30-per cent mark.

Harmanpreet Kaur wouldn’t want to change their lineup after the victory. Opener Priya Punia will want to get going after two failures. The other opener Athapaththu along with Jemimah Rodrigues will be key to their team’s chances. Harmanpreet demoted herself to number five last time and it will be interesting to see where she bats in the big match. The onus will be on the spin-trio of Patil, Radha and Poonam to choke the batters.

Despite the loss, Velocity may not alter their line-up. Hayley Matthews will want to deliver following a couple of low scores. It goes without saying that the swashbuckling Wyatt needs to chip in with another big score if her team is to challenge the Supernovas. Veda and Mithali will have their roles to play as well. Amelia Kerr has been amongst the wickets and she’ll need to step up as well.

Poonam Yadav is someone, who prefers to give the ball air and the attribute has paid dividends. Though she has only one wicket to her name but has only conceded 38 runs in her seven overs and these numbers are commendable for a tweaker in the T20 format. Last night, she picked up Wyatt’s crucial wicket and gave away only 13 runs in her four-over spell. Poonam will now hope to deliver one last time in the tournament.

The 21-year-old has been one of the brightest talents in women’s cricket currently. But, she has flattered to deceive thus far in the first two contests. She has scores of 5 and 11, and in both instances, the spinners accounted for her wicket. She also hasn’t picked up any wickets, conceding runs at an economy rate of 10. Velocity will desperately want the Windies cricketer to pull her socks up.

The prediction is for the Supernovas to win the match. 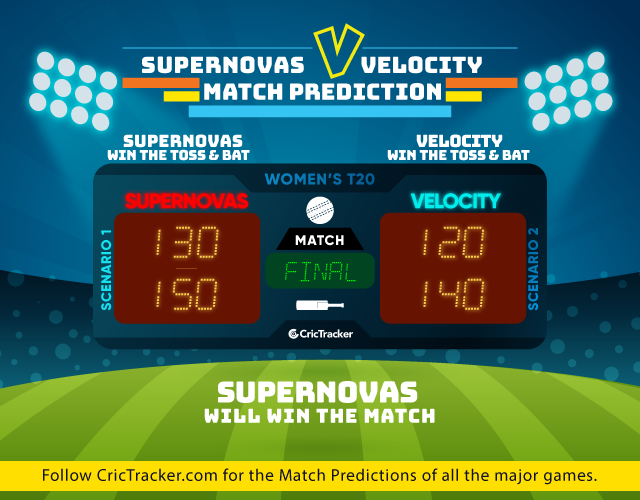